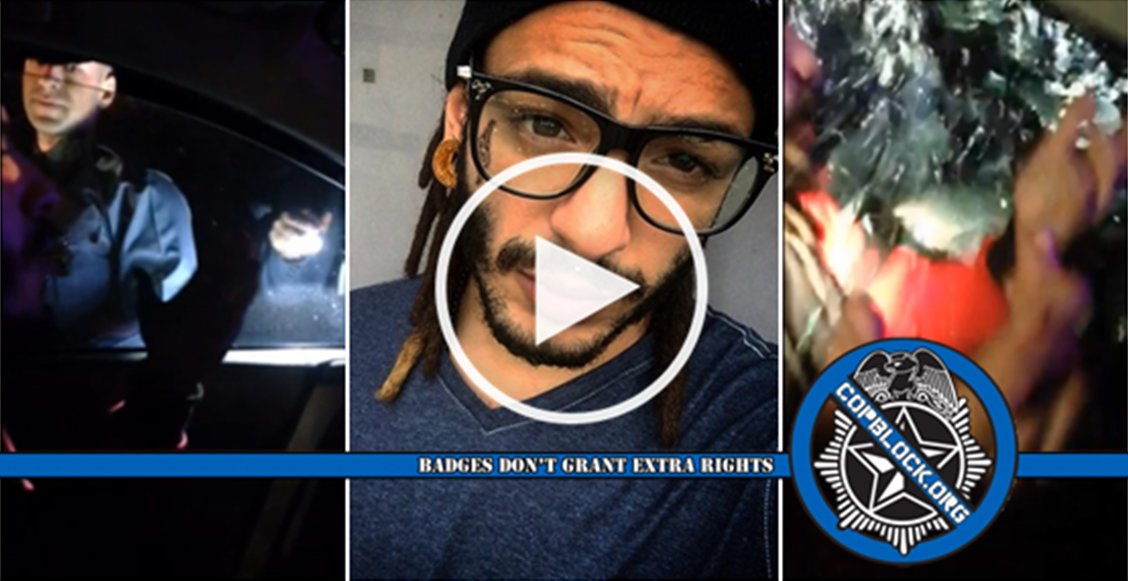 A Bayonne, New Jersey man is suing a New Jersey State trooper over a traffic stop that ended with his window being busted out and an alleged wrongful arrest that was caught on video back in April, 2014.

Twenty-year-old Dennis Ortiz was driving from Pennsylvania to New Jersey with his girlfriend when the two were pulled over for driving at excessive speeds by trooper Robert Murray on Route 78 in Tewskbury at around 1:30 a.m..

After other troopers arrive on the scene, video recorded from inside the vehicle shows Ortiz entering his car after performing what he called an “unlawful sobriety test with no probable cause.”

One of the officers return to the car and asks Ortiz to step outside again so they can “have a discussion.” The trooper makes clear that the man is not under arrest, and Ortiz responds by saying that if the officer just wants to talk, he would prefer to do so while in the safety of his car.

“You already unlawfully entered my vehicle once, you’re not going to do it again,” Ortiz can be heard saying on the footage.

After refusing to exit, the video shows Ortiz and his girlfriend eventually being told “he is now under arrest,” before – seconds later – one of the troopers can be seen smashing out the drivers side window, opening the door, pulling Ortiz out of the vehicle, and then arresting him.

Sounds of Ortiz’s girlfriend crying can be heard on the video as one officer pompously says, “we don’t want any trouble,” after the window is already broken and the man is already in custody.

Ortiz’s behavior in the footage is polite and courteous. Despite this, his lawsuit alleges that “in an effort to cover up [his] own unlawful conduct and racial profiling, [trooper] Murray falsely” charged Ortiz with obstruction and resisting arrest.

According to attorneys, Ortiz appeared in Tewksbury Municipal Court in September 2014 where he pleaded guilty to traveling 79 mph in a 65 mph zone but had his obstruction and resisting charges completely dismissed.

A reckless driving charge against him was also eventually dropped, and a ticket for being an unlicensed driver was later amended to failure to exhibit.

The lawsuit accuses Murray and the other troopers of using “unreasonable and/or excessive force” when smashing the car window, and says the officers assaulted Ortiz by touching and arresting him without cause.

It is seeking damages, punitive damages, interest, attorney fees, costs and “all such other relief as this court may deem appropriate, equitable, and just.”