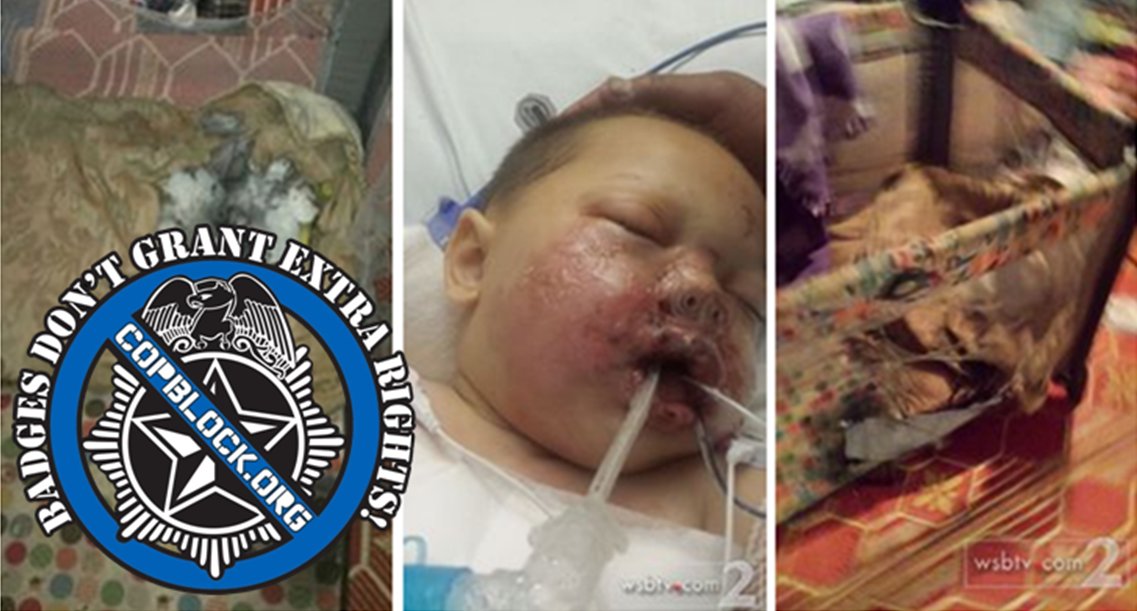 A former Habersham County, GA deputy was acquitted by a jury on Friday after being charged for her involvement in a May, 2014 raid for a drug suspect that left a toddler seriously injured when a flash-bang grenade exploded in his crib.

Twenty-nine-year-old Nikki Autry, a special agent of the Mountain Judicial Circuit Criminal Investigation and Suppression Team (NCIS), was indicted by a federal grand jury in July for providing false information in a search warrant affidavit and providing the same false information to obtain an arrest warrant that ultimately led to the raid.

Prosecutors had said that Autry knew the informant she relied on wasn’t a reliable source and didn’t buy drugs from anyone inside the house, but gave the affidavit to the judge anyway who issued the “no-knock” warrant.

19-month-old Bounkham Phonesavah (Baby Bou Bou) spent weeks in a burn unit after deputies with a Cornelia Police Department SWAT team threw a flash bang grenade directly into his crib, which exploded in his face, leaving him permanently disfigured.

The raid was conducted at around 3:00 am for a suspect that wasn’t even in the house. By happen-stance, the Phonesavanh family was staying at the residence with relatives because their home in Wisconsin had just burned down.

“[The grenade] landed in his playpen and exploded on his pillow right in his face,” Bou Bou’s mother, Alecia Phonesavanh said at the time. “He’s only a baby. He didn’t deserve any of this.”

Following the raid, the toddler was rushed to the Grady Memorial Hospital burn unit where he stayed for weeks and was put into a medically induced coma.

Although her actions directly led to Fourth Amendment violations that resulted in Bou Bou’s injuries, the jury declined to hold Autry responsible on Friday after her attorneys argued that she became the scapegoat for other officers’ errors in the case.

Autry testified that the affidavit was prepared by a supervisor, but “acknowledged she reviewed it and recommended no changes be made despite numerous inconsistencies” – a failure her attorneys portrayed as “unintentional.”

The defense pinned the blame on how the raid was conducted on the ground and noted that deputy Charles Long, the officer who threw the grenade, violated protocol by failing to illuminate the room beforehand.

Prosecutors didn’t agree, but said they respected the jury’s decision.

“If there had never been a search warrant Bou Bou would’ve never been injured,” Assistant U.S. Attorney Bill McKinnon said in his closing arguments. “There’s a direct causation.”

Autry, who was a 10 year veteran with the Habersham County Sheriffs Department, resigned from her position the month following the raid. It is unclear if she will attempt to pursue other work in law enforcement.

Months after the incident, County attorneys said that “the board of commissioners concluded that it would be in violation of the law” to pay for Bou Bou’s medical bills, but the Phonesavanhs did reach a $964,000 settlement with the county in April.

The family still has lawsuits pending against other counties whose officers participated in the multi-agency task force raid.