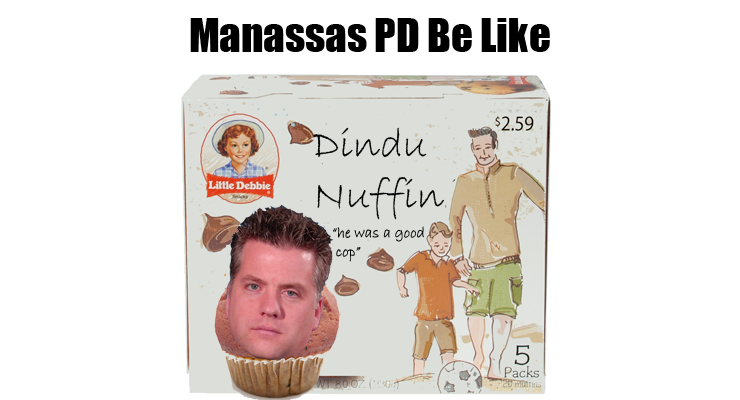 The long and twisted saga involving Detective David Abbott of the Manassas City Police Department came to an explosive end Tuesday morning when he shot and killed himself in front of the police officers who had come to his house to arrest him on two counts of indecent liberties by a custodian and two counts of use of a communication device to solicit a sexual offense. Abbott, a 14 year veteran with the MCPD, also served on the Northern Virginia-Washington D.C. Internet Crimes Against Children Task Force, and takes his place in a long line of cops exposed for being sexual predators.

“Police said they learned that Abbott had sent inappropriate text messages and emails to a 13-year-old boy he met through the hockey program. By phone and social media, Abbott had been asking the boy for sex acts for more than two years, county police said. Detectives then learned of a second potential victim, a boy who was 13 and was also part of the Patriots hockey club in 2008 when Abbott began sending him inappropriate messages, police said.”

Instead of reacting with shock and revulsion that the very person who was supposed to be investigating sex crimes against children was out committing these crimes himself, possibly using his access to police resources and training to escape detection, MCPD changed their profile photo to a shield with a black mourning band on it. The message to the public is clear— Even cops exposed as vile kid-touching vermin come before their obligation to safeguard the public. Already abused and betrayed by a man who wore that badge, how must Abbott’s untold numbers of victims feel at seeing MCPD grieve this “loss?” Of course, it’s not outside the realm of possibility that the MCPD was not too surprised at this development.  After all, creating child pornography was all in a day’s work for the department. Abbott had previously gained notoriety for a disgusting and dastardly plan to take photographs of a 17-year-old boy’s erect penis. This was to collect evidence in a teen sexting case where the boy was charged with 2 felonies for sending nude videos to his 15-year-old girlfriend.  The charges? Possession of child pornography and manufacturing child pornography. Apparently in Manassas, you have to manufacture a little child pornography to prosecute child pornography. It’s just a perk of the job if some of the “evidence” you create finds its way into your private stash.

Some cause happiness wherever they go; others whenever they go.— Oscar Wilde

Carlos Flores Laboy who served as the teen’s guardian ad litem in the sexting case told the Washington Post, “They’re using a statute that was designed to protect children from being exploited in a sexual manner to take a picture of this young man in a sexually explicit manner. The irony is incredible. As a parent myself, I was floored. It’s child abuse. We’re wasting thousands of dollars and resources and man hours on a sexting case. That’s what we’re doing.”

The boy’s defense attorney, Jessica Harberson Foster, spoke plainly about the appalling plan in another interview with the Post’s Tom Jackman, saying, “Who does this? It’s just crazy.” She could never have guessed her words would lead to an entire year of litigation. Abbott filed a defamation lawsuit against Foster claiming that he suffered “intense media and public scrutiny, embarrassment, shame…injury to his reputation as a law enforcement official…[received] hundreds of emails that included pornographic or threatening material…telephone calls threatening death or other actions, and experienced “severe emotional distress…which resulted in counseling with a psychologist and the need for medication.”

Abbott’s lawsuit further claimed that Foster’s remark “asserts unfitness to perform the duties of his office or employment, with a direct intention to bring Abbott under scrutiny from the media and from the public.”

According to law.com, defamation is “the act of making untrue statements about another which damages his/her reputation.” With Abbott we had a detective who sought to create child pornography in the course of ruining a teenage boy’s life with trumped up felony charges and lifetime placement on the sex offender registry, while he had been sexually exploiting children since at least 2008. If that doesn’t speak to his unfitness to perform the duties of his office, I don’t know what does.

Perhaps Abbott would have thought better of his lawsuit if he’d been familiar with Oscar Wilde’s famously ill-conceived defamation lawsuit against the Marquess of Queesnberry, who also happened to be the father of his male lover, for referring to him as a “sodomite.” The claim was easily proven to be true, and Wilde found himself financially ruined, and then charged and convicted of sodomy and gross indecency. Who knows what secrets came out of the closet during the 13 months Abbott’s case proceeded; However, he dropped the lawsuit in November without explanation.

A Message to Those Mourning Child Molesters in Uniform

The MCPD Facebook post implores readers to give Abbott’s peers privacy during this difficult time. Comments left on the page from cops and cop apologists predictably express sympathy only to the department for its “loss”. Few mention the terrible acts Abbott is accused of committing except to mention “innocent until proven guilty.” None mention that his suicide was an admission of guilt — an inexplicable one since the justice system has been nothing but lenient to cop sex predators, allowing them to plead down to misdemeanors and even keep their second amendment rights so that they could go on to commit violent crimes later on.

At any rate, the FB comments from sex offender peers and sympathizers are as disgusting as they are predictable. The only time cops/cop apologist scum talk about due process, innocent until proven guilty, reasonable doubt, or “not having all the facts” is when one of the boys in blue gets caught red-handed. Otherwise, cops are happy to play judge, jury, and executioner for crimes as petty as a traffic violation, so you know what? Fuck his “innocence,” fuck your privacy, fuck your grief, fuck your loss, and if holding the thin blue line is so important to you that you’d rather stand beside a sick bastard child molester than the victims and community he betrayed, fuck your badge, too.