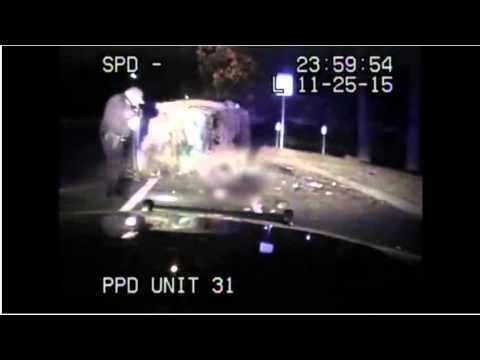 Nearly a week ago I blogged about Patrick Feaster, a Paradise (CA) police officer, who shot Andrew Thomas in the neck as he tried to crawl out of a vehicle he had just crashed. The accident took place the day before Thanksgiving last month but the video didn’t come out until late last week and when it did, so did the announcement that no charges would be filed against Feaster for shooting Thomas – putting him in critical condition to this day.

Since the horrific video was released many have been calling for not only Feaster’s job but also that of Mike Ramsey, the DA who decided this was an accidental discharge. It seems that the public outcry has reached Ramsey who decided to release his “Lay” and “Final” reports regarding his decision. They are nearly as troubling, IMO, as the video. At the end of this post you can read the reports in their entirety. For now I’m going to breakdown a few of the most interesting quotes.

Most of the persons who view the video for the first time, like the investigative team itself that night, are justifiably horrified by what they first see. As an example, the team knew that night the officer was claiming the discharge of his semi-automatic pistol was “accidental.” But what was first seen in the video was the very real perception that he shot twice. It was only after a software program was obtained which allowed the original video to be broken down to its original 25 frames per second that it could be seen that what appeared to be a “second shot” was actually an optical illusion produced by a beam of light coming from the flashlight attached under the barrel of the officer’s gun. This is detailed in the report attached.

Already Ramsey is setting up the reader for much speculation, something he later states is NOT a legal factor when determining criminal charges but seems to be ok when giving the benefit of the doubt to Feaster. It shouldn’t matter if there were two or one shots, other than as a matter of fact. If this officer fired his round off without knowing he was doing it, then I’m sure there’s a crime for that. I highly doubt you or I could shoot our friend in the neck and claim we didn’t mean too without catching a charge.

Also detailed in the report is the evidence from the frame-by-frame analysis of the video and the combined experience of the investigators which indicates the officer did not intend to fire his pistol and was “surprised” by its discharge. This included the fact the discharge is seen occurring while the officer is in mid-stride; and that he flinches his head and does a “stutter-step” when the gun fires. Officers do not intentionally fire weapons in such a manner and additionally they are trained, as was this officer (from his training records over five years), to fire a minimum of two shots when they fire intentionally.

To Ramsey the actions of Feaster that day prove the discharge was accidental. Meaning that Feaster did NOT know he was about to unholster a gun, raise it to shooting level, pull a trigger with built in safety and land a shot right on the subjects neck. As if this wasn’t enough, Ramsey continues on…

A review of whether he should have pulled his weapon at all when the vehicle’s driver suddenly pulled himself out of the vehicle was also extensively examined. Some of the investigators expressed concern as to whether the gun was necessary and whether there could have been another approach. Others however, noted the pulling and pointing of the weapon at the rapidly exiting driver was reasonable within an officer’s training involving a “felony vehicle stop.” What was known to the officer at the time was the vehicle had sped out from the bar’s parking lot at high speed, with tires screeching and no headlights. This was confirmed by bar patrons who witnessed the driver quickly speed out of the parking lot, nearly running over some people in that parking lot. The video shows the car, without headlights, turn at high speed through the red turn signal and continue to rapidly accelerate down Pearson until it recklessly hit the median and overturned, throwing the woman passenger out and onto the ground in front of the officer. Investigators noted the officer could reasonably expect he was dealing with a quickly-exiting driver who had just committed a felony DUI vehicular manslaughter in front of him and it was within the realm of reasonable tactics for the officer to be prepared for either an attempted escape or the possibility that the suspect was armed.

While Ramsey provides Feaster with valuable legal advice and out here, he fails to do so for Thomas the driver of the car and man who was shot. I highly doubt he knew that his wife was killed in the accident in the mere seconds it took him to climb out. In fact, a logical person could assume that he was climbing out to look for his wife, or, was just in a drunken stupor. Either way, assuming that Thomas knew his wreck was a felony manslaughter case and not a traffic accident is a jump of epic proportions. It’s also an assumption that highly favors the officer and his negligent actions.

Ramsey goes on to say…..

Whether the stress and anxiety of the situation caused the officer to reflexively pull the pistol’s trigger when he took it out of his holster is subject to a great deal of speculation and debate. There was also speculation by a number of the very experienced law enforcement range masters, who were among the investigators on this case, that the design of the pistol’s after-market flashlight activation system – with the on-button on the pistol’s grip just below the trigger guard – may have caused finger confusion as to what was being pressed. Speculation however is not evidence and the officer did not blame his gun’s flashlight system. The testing evidence on the pistol’s functioning showed it would not fire without a pull of the trigger. As detailed in the report the officer was at a loss to explain what happened to cause the discharge. A search of the internet did show several news stories about “accidental/negligent discharges” among police agencies, particularly with this officer’s pistol model or similar trigger-safety weapons.

The investigators were clear in their collection of the evidence in this case that the officer did not purposely or intentionally fire his pistol. Some in the public will never accept that conclusion, but as explained in the legal research portion of the report – without being able to prove beyond a reasonable doubt that there was a conscious, intentional, willful pulling of the trigger – there are no criminal charges that can be filed under California law for the negligent discharge of a weapon resulting in injury, no matter how horrible, as long as there is not a death and in this case the driver was not killed by the gun shot. Civil liability, of course, is an entirely different analysis and will undoubtedly be decided in the civil court differently than the criminal courts.

This is the usual bullshit you find when cops investigate cops and then have their buddies (Ramsey) decide if there should be charges. First the officer of course have to blame the gun and it’s trigger position to that of the flashlight. While officers are required to do X number of hours of training with their firearms, NOT ONE SINGLE PARADISE police officer has suggested there were such problems with their firearms. Of course the whole department will probably get new guns now to prevent this but it’s just an excuse.

Furthermore, Ramsey goes on to say that “without being able to prove beyond a reasonable doubt that there was a conscious, intentional, willful pulling of the trigger – there are no criminal charges that can be filed under California law for the negligent discharge of a weapon resulting in injury.” Once again Feaster is given the benefit of the doubt and if he weren’t a cop he would be going to trial. How do I know that? Because I’m about to head to a trail for putting chalk on a sidewalk. In order for the crime of “Criminal Mischief” to take place I had to ‘willfully’ know my actions would deface the property. The state’s evidence is that of a security camera that shows me chalking. Wouldn’t this be the same for Feaster?? Shouldn’t he have to go into a court and explain to a jury how this wasn’t willful? Instead he has the prosecutor doing it for him?

While the above are already troubling enough, Ramsey then ventures into the question we’ve all been asking. That if this was an accidental shooting why did it take Feaster 11 minutes to tell others on scene that he had discharged his weapon? Ramsey addresses this by saying:

This brings us to the potentially most troubling part of this shooting, the lack of a specific notification of the “accidental discharge” to the other responding officers for up to 11 minutes and only when the driver was removed from the vehicle by firefighters and “unexplained” blood was found. This lack of immediate notification greatly troubled all the team investigators, as it did me. The officer explained it as a result of his shock and confusion of the entire event – and the unreasonable hope and belief that maybe his gun really did not go off and injure the driver. But there is no criminal charge for such inaction (without a death). The officer’s actions after the shooting will be handled in the administrative portion of the internal investigation being conducted by Paradise Police and is not something I am involved in.

Seriously? If this case doesn’t show you the complete and utter bullshit that police investigations (especially of their own but in general overall) have become then nothing will. The state isn’t supposed to play favors and give legal advice to those they investigate but that’s exactly what happened here. If this was anyone without a costume and a badge they would be in jail right now while prosecutors FOUND something to charge them with. Or they would have just charged him with unlawfully discharging a firearm leading to injury. It would have been on Feaster to prove that it was an accident, just like it’s on myself to prove that Chalking a sidewalk is free speech.

On another note, Ramsey isn’t charging Feaster but he is charging Thomas (the driver). Yet, by Ramsey’s logic the crash was just as much of an accident as the discharge of the firearm. Yet, that won’t matter because there was a death involved, as if Thomas needs any more punishment than surviving when his wife didn’t.

Now that Ramsey has explained to us why he shouldn’t have a job that requires him to be within 100 feet of a law book we can eagerly await the hand slap the police station will give Feaster. Even if he has his badge taken from him it will probably be under some sort of light reasoning, which will allow him to find a job on another police department. Which shouldn’t be hard for him since many police departments are looking for poorly trained, trigger happy cops, who are unable to determine if their gun fired itself or if they had pulled the trigger.

WATCH THIS “ACCIDENTAL” SHOOTING BELOW: