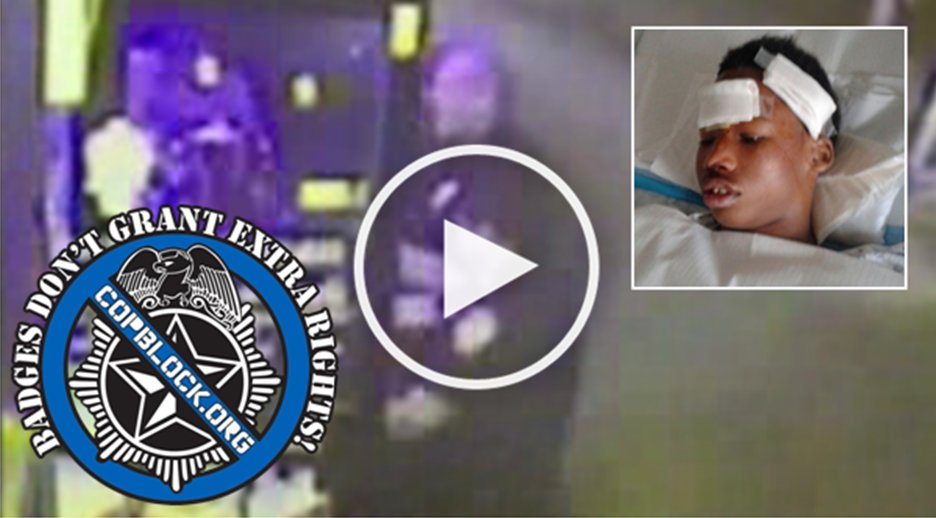 Video has emerged showing a handcuffed Bronx teen being slammed into the store-front window of a hookah bar by an NYPD sergeant.

Fourteen-year-old Javier Payne and his 13-year-old friend were arrested by cops for allegedly punching a man after asking him for a cigarette on May 17, 2014 outside Hookah Spot on Arthur Ave.

Surveillance footage recorded from the scene shows Sgt. Eliezer Pabon walking back and forth on the street before taking several steps backward and turning and rushing at the teen.

The sergeant is seen striking Payne in the upper body with his left arm, sending him back into the window, which explodes on impact.

After shards of glass fly to the ground, Pabon and another officer attempt to corral the doubled over teen to the ground as he resists.

Police say Payne was mouthing off to the officers before he was smashed into the glass, but the short 40 second clip contains no audio.

The action on the footage is partially obstructed by an open door to the hookah bar, but what transpired can still be properly gleamed.

Payne, who was an eighth grader at the time of the incident that weighed only 89 pounds, suffered facial lacerations as a result of blow and had to undergo four hours of emergency surgery to remove glass from his heart and lungs.

Pabon was cleared of any criminal wrongdoing in the case in November of last year by Bronx D.A. Robert Johnson because the window was previously cracked.

Sergeants Benevolent Association lawyer Andrew Quinn has said that the window should not have exploded in the way it did based on the use of force the sergeant applied alone, and that the fact that it did so shows it was in a compromised condition.

None the less, Quinn said Tuesday that Pabon will face disciplinary action from the NYPD after the Civilian Complaint Review Board found he used excessive force. The sergeant is scheduled to go on trial in an administrative hearing at the beginning of next month.

Lawyer Scott Rynecki, who has filed a $25 million lawsuit on behalf of the teen, said the fact that Pabon was cleared of criminal charges is an injustice. He is calling on incoming Bronx D.A. Darcel Clark to reopen the case.

“There’s no question the video shows there was an assault,” Rynecki said. “There was absolutely no justification for the sergeant to lay his hands on that handcuffed 14-year-old boy. It’s mind-boggling that the D.A. [Johnson] did not even present the evidence to a grand jury.”