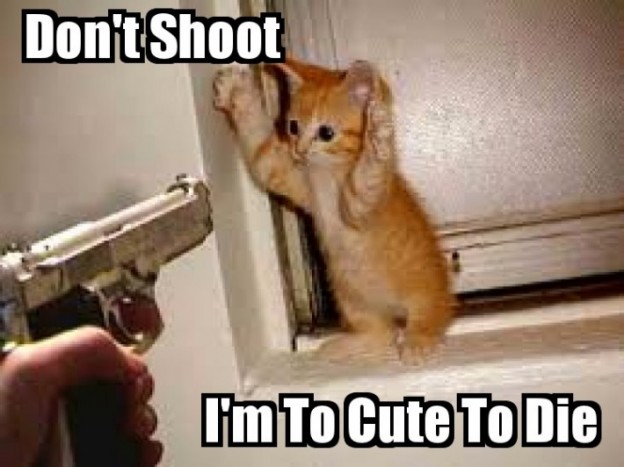 Just when I had thought I blogged about it all when it comes to police, today I had this story dropped in my lap. It comes from North Catasauqua, PA and involved Tom Newhart’s cat, Sugar, who went missing last week. According to WMFZ-TV:

“First thing at the door he said it’s not politically correct but if injured we will put it down,” Lienert said.

He said a short time later the officer shot the cat near his pool then telling Lienert he’d have to clean up the mess. He said aside from some poking and prodding, the officer never tried to catch the cat. Lienert went on to say aside from scared hissing, the cat wasn’t aggressive.

After recovering Sugar’s body Newhart had her inspected by a vet. “No lacerations, no blood, other than neck wound on body. ” Newhart said, while showing his vet’s report.

In a statement, the borough said it’s in the process of gathering information and conducting a review and investigation of what took place. After this process is complete, the borough will be taking the necessary and appropriate steps.

For Newhart that means having the officer fired and the chief step down.

We all know that cops have no patients with those who are in need of assistance or that have disabilities. We’re also aware of the officers fear of dogs that are not their own and under their control. But cats? Really? Was this officer so ‘in fear of their life’ that they had to shoot it with a shotgun? As noted in the WMFZ-TV – see video below – segment the officer didn’t even try to catch the cat, didn’t inspect it for injury or anything, he just shot it. That’s a heartless person, period.

While I hope that Newhart can get the justice he desires but holding police responsible for their actions against other human beings is difficult, let alone animals. This is all the more reason to educate yourself about filming the police, knowing your rights and refraining from calling the police. Especially for such things like lost cats, loud noise or ‘suspicious activity.’ I bet Lienert is wishing he would have gone over to Newhart’s house instead of calling the police. Or maybe a camera would have made the cop more friendly, we all know how they love their PR moments.

The video player for the local news story may be experiencing technical difficulties above. If you are unable to view the report and wish to watch it, CLICK HERE.