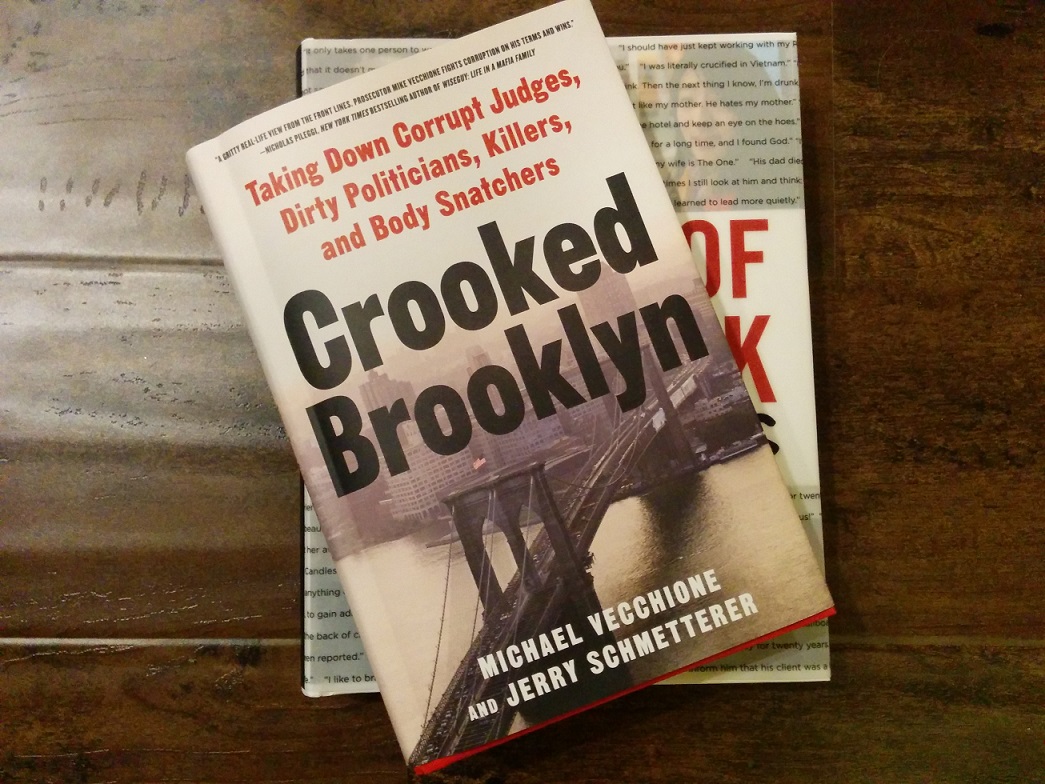 Crooked Brooklyn is a sort of memoir by former District Attorney Michael Vecchione, and is replete with behind-the-scenes stories from the perspective of a dedicated prosecutor. Vecchione’s career involved prosecution of plenty of mobsters, gang members, and vicious criminals of the traditional sort, to be sure, but the book also details some fairly heinous corruption and crime in the ranks of law enforcement and the justice system.

Though Cop Block and its readers (rightly) have plenty of criticisms of the American justice system, including the role of prosecutors in over-criminalization, it’s  clear from the book Vecchione was passionate about his job and and the idea of “justice.” He also described what he observed to be the “underbelly of the police department,” noting,

I observed firsthand that some police officers could not be trusted and were as corrupt as some of the people they arrested. Sometimes these cops would escape criminal prosecution… On the other hand, some, I learned, were victims of the byzantine politics of police headquarters. Let’s face it: that system was known as a kangaroo court for good reason.

Vecchione also learned on the job that two NYPD detectives, Louie Eppolito and Stephen Caracappa, were carrying out hits for the mafia. Based on a trusted source and some detective work, Vecchione determined Eppolito and Caracappa were on the payroll of an Anthony “Gaspipe” Casso, a mob underboss.

Vecchione’s projects included prosecuting a cop named Robert Cabeza, who robbed a liquor store, as well as multiple corrupt judges. A supreme court judge named Victor Barron demanded bribes from attorneys. Barron ultimately was sentenced to 3-9 years in prison, though he could have been sentenced 5-15 years. He continued to receive a $97,000 a year pension while serving prison time. Judge Jerome D. Cohen was indicted for accepting bribes in exchange for diverting money from children’s trust funds into a Brooklyn credit union.

The District Attorney’s office was not free from corruption, either. Vecchione investigated a prosecutor within his own office, who was known as “The Undertaker” because he illegally promised favors by meeting bribe payers in the basement of a funeral home. Purportedly over Vecchione’s objections, The Undertaker was allowed to resign and avoid criminal charges. Vecchione observed, “We always wondered whether it was a case of local politics interfering with justice as the Undertaker was the nephew of a community political leader.”

From a litigator’s perspective, the book at times lacks what could potentially be highly intriguing detail. Vecchione describes a major homicide case in which he lost at jury trials three times. He explains the first trial was lost because two brothers “were fixed to dump that case.” The back story to this situation would be worthy of a Hollywood mob film, and certainly deserved at least a short explanation in Vecchione’s book.

The prosecution purportedly lost the second time because the defense “exploited the less than stellar backgrounds of the witnesses. And sometimes a jury just does not like cops.” However, all good trial attorneys “exploit” witnesses who have questionable backgrounds and who are otherwise not credible or give

dubious testimony, and all good trial attorneys know to anticipate this at trial, so if this situation was particularly unique, it warranted discussion. It would also have been interesting if Vecchione provided more detail on how the voir dire and/or jury polling at the end of the case played out in each of these trials.

Presumably, questions relating to any mistrust, dislike, or perceived bias against police were asked of prospective jurors, and openly hostile or biased jurors would have been removed from the pool. If multiple members of a jury nevertheless ended up demonstrating a heavily biased anti-cop attitudes, the background, detail, and post-trial impressions of the jurors (if any) in this regard would certainly have been enlightening.

In any event, the book was an interesting read, and confirmed what Cop Block readers likely already knew – the institutions of law enforcement are anything but free from crime and corruption.