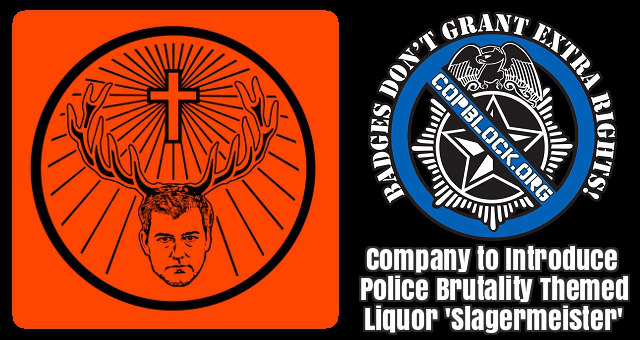 The German company famous for its blackout-inducing liqueur Jagermeister will be unveiling a new product just in time for New Year celebrations. Earlier today the company released the following statement concerning its upcoming product.

2015 has been the year when police brutality broke into the public consciousness after years of apathy, especially in our largest market, the United States, where over 1,100 people have already been killed by police this year. To help shed further light on the issue we will be releasing a new beverage on Christmas Eve referencing one of the most egregious police-killings of the year, that of Walter Scott by Officer Michael Slager. The new drink, Slagermeister, is a blend of 42 spices and the tears of children orphaned by law enforcers in 2015.

The companies flagship product translates into ‘master hunter’. Slagermeister, a clear white liquor that doesn’t mix well with darker beverages, translates into ‘master butcher’, as ‘Slager’ is the Dutch surname for butchers. Early testers have said that while the drink is delicious, it tends to leave a bad taste in your mouth for a very long time. Next week the company will begin releasing ads for the new beverage using the slogan:

Slagermeister, the only beverage that you can get wasted while running away from it.

Following the announcement liquor distributors were flooded with phone calls from eager retailers and bars hoping to feature the product as part of their New Years sales and celebrations. Already a number of bartenders have been busy concocting potential recipes featuring the new beverage. A few of them were found throughout Twitter and social media.

Neither the families of Slager or Scott have yet publicly commented on the product.

Former Ohio officer Ray Tensing is apparently negotiating with another spirits company of note on a beverage to be named Courvosi-Ray.