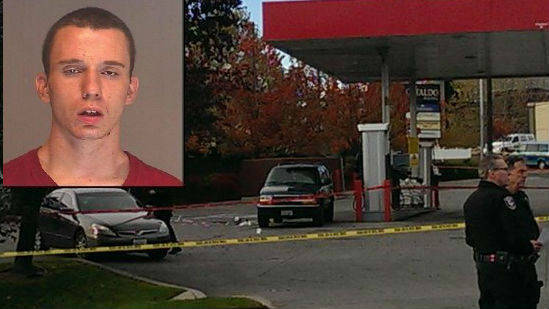 Last month 20-year old Tyler Randant was shot while attempting to use a knife in a carjacking at a gas station. The body cameras of  Cory Lyons and Holt Widhalm, the two officers dispatched, captured the incident and even though the investigation is complete, the department is refusing to release the footage.

When confronted Tyler placed the knife to his own throat and after refusing orders to put the knife down the officers opened fire. Randant luckily wasnt killed and was transported to the hospital and is in stable condition.

This is strange considering other Washington departments are wearing body cameras and local news outlets have received body camera footage as quickly as the day after the investigation was complete.

Usually after an investigation is transferred to prosecutors office it opens doors for public records requests. However in Spokane, those requests were denied because the investigation was active. That no longer applies in the Randant case and refusing to release the body cameras anyway, is the opposite of transparency. Even if every cop had a  camera hanging off of them like a piece of jewelry, I doubt it would do much to diminish the shroud surrounding law enforcement investigations.

Local departments in the Spokane area are wearing body cameras and have been quick to release their footage. Local news outlets have received body camera footage as soon as the day after the investigation was complete.

“The body cams don’t lie. We can’t edit them, they’re uneditable, and they don’t lie and it gives you that third party look at the situation as it’s being played out,” Bennett said.

The only reason the department has to hold the video, is that the footage shows the officers participating in behavior unflattering to the department. Most of the time, videos that do not tarnish the reputation of the police are released quite quickly and often before the investigation is over.

In Minneapolis Jamar Clark was shot in the head and witnesses said he was in handcuffs. An encampment sprung up at the 4th precinct for over two weeks. A protest is planned at the Mall of America on December 23rd unless the multiple videos that the city is holding are released.

The video of Laquan McDonald’s murder was held for almost a year before being released. It showed Jason Van Dyke unloading the entire magazine of his pistol into Laquan, in spite of the fact that he was on the ground. After its release, he was charged with first degree murder and the police commissioner was fired. Activists and community members have been calling for the resignation of the Mayor as well.

Police body cameras are not the “be all, end all” when it comes to police brutality. Instances like this one in Washington are prime examples of this. Police departments sell the body camera ideal to their constituents as a promotion of increasing the transparency  of their departments. They became increasingly popular after Mike Brown was killed in Ferguson, MO.

Regardless of popularity, transparency or other reasons that body cameras have become standard issue, often times the cameras aren’t turned on or have mechanical malfunctions that corrupt the footage. Officers have even disabled antennas in order to sabotage their cameras.

The police really have no incentive to hold themselves accountable but every now and then they sacrifice a few of their own in order to maintain an appearance that it’s only a few bad apples and when they are discovered they are removed. With well over two thousand people killed just in the past two years it’s perfectly clear that it’s not just a few bad apples but the institution itself.