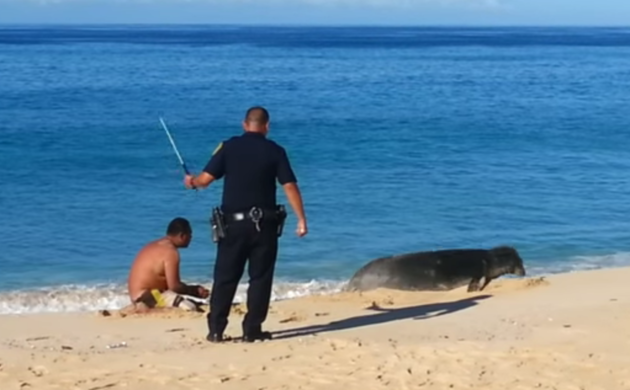 The family members of Jamie Kalani Rice state that he has a history of mental illness (particularly bipolar disorder) and that he wasn’t a danger to anyone when Ming Wang, a Hawaii Police employee, hit him repeatedly with his baton last year during an incident involving a seal. According to the HuffPost Hawaii:

The incident started after Rice ignored signs warning people to give the animal its space. In the video, he can be seen throwing sand at the seal.

With an estimated population of about 1,060, the Hawaiian monk seal is one of the rarest marine mammals in the world. Anyone who harasses or disturbs a monk seal can face fines exceeding $25,000 and up to five years in prison.

About six and a half minutes into the video, Wang approaches Rice and points down the beach, appearing to signal for Rice to leave the area. Shortly after, Rice screams something at the officer, causing him to pull out his baton.

Around the 9:15 mark, Rice starts to walk away, but the officer quickly pursues him. The officer unloads pepper spray in the man’s face and strikes him numerous times with the baton below the waist. Once Rice is on the ground, Wang appears to kick him in the back before placing him in handcuffs.

The full, 11-minute video can bee seen below:

Wang said in his police report that Rice had refused orders to step away from the seal and kept walking when told he was under arrest.

The incident reportedly left Rice with broken bones in his hand, but he refused medical attention and signed a waiver of prosecution for injuries suffered during his arrest.

But Hawaii News Now reported Tuesday that an attorney for Rice said he plans to sue the city of Honolulu for police brutality.

“This guy was a threat to no one other than the seal,”Attorney Michael Green told HNN. “And the seal and he had parted ways long before that. This is shameful.”

Naturally, Wang has been back on the force – probably attacking other defenseless people – since the prosecutor decided to not charge him. Which in itself, since Wang is a police officer, is nothing new but he has a violent history pattern. In 2009 Wang was charged with misdemeanor domestic abuse and later pleaded guilty to misdemeanor assault and petty misdemeanor harassment. That little plea deal, knocking the charge down to a petty crime, is what allowed Wang to keep his job.

Even without the past history of aggression, what Wang did to a man with an illness is simply disturbing. HE basically stalked the man, annoyed him and then beat him before taking him to a cage. This also goes to show just how broken the system is. Not only did ‘authorities’ allow Rice to refuse medical attention, they also duped him (IMO) into signing a waiver of legal ramifications for the abuse from their employee.

If the system (police, jailers, judges, and attorneys) is so broken that no one stands up for a man who was attacked, caged, and tricked, then who the hell does it stand up, or work, for?

Hopefully this is the last straw for Wang and he’ll lose his job. Yet, I wouldn’t be running off to Las Vegas to bet on it. Even if charged he’ll probably be given a plea that ensures he can keep up his aggressive nature while sporting a costume and badge.