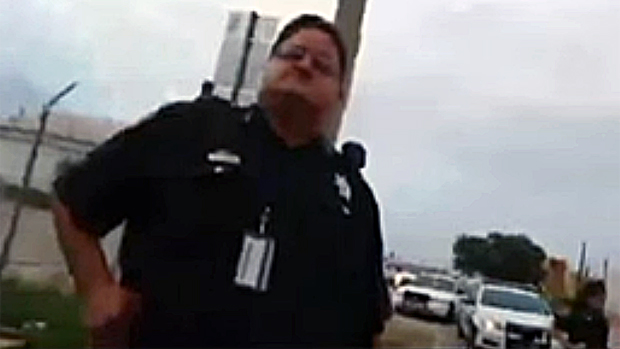 *The post below was originally published at Photography is NOT a Crime (PINAC) by Carlos Miller on November 4th. I’ve been meaning to write my own account of this story but just haven’t found the time. Of course the team of PINAC reporters is doing a great job. Please bookmark, support and share their content/work they’re a great, hardworking, team.*

UPDATE! Phillip Turner has been released from jail. Both were on public property but it appears as if the Harris County sheriff’s deputies who arrested them were off-duty and working security for the Shell refinery in Deer Park, an industrial municipality outside Houston. Essentially hired goons.

Phillip Turner, who is quickly becoming Texas’s version of Jeff Gray, was charged with failure to identify and criminal trespass. And his friend David Worden was charged with interference with public duties for not allowing the deputy to pat him down.

Both are still incarcerated.

However, Turner recorded his arrest using Periscope, an app that not only allows live streaming, but keeps the video posted online for up to 24 hours, allowing us to obtain the video and post it on YouTube.

The video is not the best quality but it clearly shows Harris County sheriff’s deputy Joe A. Garza violated Turner’s rights by arresting him.

And once he was thrown in the back of a patrol car – still holding his phone that was still recording – he captured the voice of one cop through the car’s citizen band radio wondering if they should find another contempt-of-cop charge because the evidence for trespassing is flimsy.

“See if you can find out more specifically what the charges are; it’s kinda hard to trespass on a public roadway,” the voice says right after the 24:30 mark in the video.

The video is long but we posted it without editing it to show you everything that led up to his arrest. But if you want to jump right to the conversations between Turner and the cops, start viewing at 13:00.

The first cop that pulled up was a Deer Park cop named Bridges who informed Turner she was only looking out for his safety in case the urge struck him to suddenly start jumping in and out of traffic. She tried to pry him for information about his name and the story he was working on, but was not too aggressive about it.

Although Turner was standing in a public area between the fence that surrounds part of the refinery and a public street, Garza informed him it was illegal to take photos or shoot video because it was a “federally regulated chemical plant.

And then he engaged in an idiotic back-and-forth with Turner by repeatedly demanding his identification, only to be repeatedly reminded that under Texas Penal Code 38.02,  Turner was under no legal requirement to identify himself unless he has been lawfully arrested.

Finally, Garza became so frustrated that he shoved Turner against the fence and frisked him.

“I gotta see for my protection, what you got on you,” Garza said.

And then Garza placed him in the back of the Deer Park patrol car driven by Bridges to await another Harris County deputy to pick him up and transport him to jail because Garza was probably still on the clock for Shell.

Commenters on Reddit were watching the video when he was live streaming and have come up with some property lines to determine if he was truly trespassing, but have not coming to a definite conclusion.

But anybody with common sense will assume the fence is the property line. Or that Shell would at least mark their property with signs.

UPDATE: It appears as if Worden has been released but Turner is still in jail. The third video below, just added, is Worden recording from the same area on Monday when he was harassed by a security guard, but it does not capture his arrest.

UPDATE II: The Harris County Sheriff’s Office issued a press release, addressing both arrests, insisting that the deputies were only trying to “safeguard the targets of potential interference or attack.”

Donate to The PINAC Fund this holiday season to support independent journalism.

The PINAC Fund is a 501c(3) non-profit corporation who sponsors this website. All donations are tax deductible.