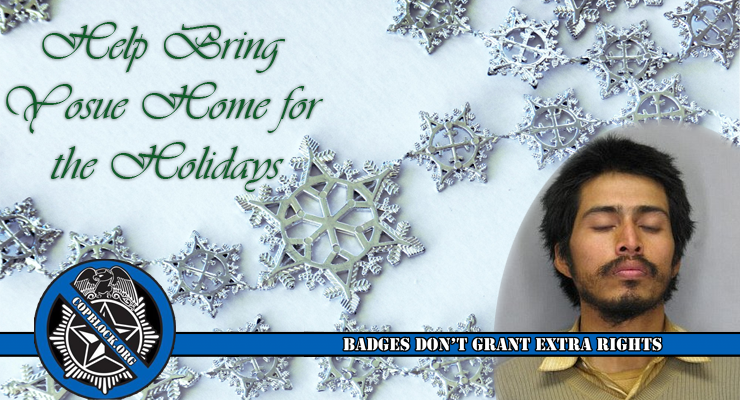 The enduring popularity of Henry David Thoreau’s Walden and recent proliferation of programs like National Geographic’s Live Free or Die shows that many people have a deep yearning to escape the consumerist hamster wheel we’re all trapped on by transitioning to living sustainably off the land and their own hard work. While watching Live Free or Die, it’s often struck me that, thanks to the state, the kinds of lifestyle shown is not really possible for most of the people who desire it.

Even if you have the formidable skill and character required for this lifestyle, and land of your own to work and live on, you still have to have the means to pay the property taxes each year, and manage not to run afoul of all the state and local restrictions most people aren’t even aware of. You certainly are not allowed to Rewild on public lands either.

Fairfax, Virginia resident Yosue Rios was living this lifestyle out of necessity, not romanticism of days gone by. Unable to afford housing in a city where the average rent for a 1-bedroom apartment is over $1,300, he dug out an underground two-room dwelling in a local park, where he lived and spent time trying to better his lot in life. All that came to an end when two area residents discovered the tunnel, its entrance camouflaged with leaves and plywood, on Sunday, December 13th and called the police. Rios returned to his self-made home to find Fairfax City police officers dismantling it.

Video shot by police shows steep steps leading to a split-level home of sorts. On one end of the cavern was a bedroom; on the other was a sunken living room. Inside, officers found books and papers that looked like homework assignments.

“He was studying several topics, from what it looked like,” [police spokeswoman Sgt. Natalie] Hinesley said, noting officers found English language manuals. “He had an alphabet written out with the sounds.”

He also appeared to be a student of the Bible, police said, and had carved into the cement-like walls the word “Adullam”, the name of a cave where David hid from the King of Gath.

Rios was carted off to the Fairfax County Adult Detention Facility, the same jail where Natasha McKenna was tased to death 10 months ago, and charged with destruction of property. Rios’ underground abode was filled in with dirt the next day, and he  got to spend an unhappy 26th birthday (December 17th) in jail.

Public response was swift and impressive, with CNN, NY Daily News, Daily Mail, and the Daily Caller all covering the story, and a Go Fund Me account set up for Rios has collected nearly $2,500 at the time of this writing.

As one Fairfax resident told reporters, “More power to him. He did something that most people don’t do. He actually took a step to change his life and made his own little home where he could study.” Such a story would resonate with people any time of the year, but especially around the holidays when many people reconnect with the warm-heartedness and generous spirit each of us should cultivate all year-round. The exception to this being cop apologist scumbags who value the rules we use to cage and kill people more than the lives and well-being of the people these rules allegedly protect.

Stunned by the amount of public outrage they received following the arrest, the Fairfax City Police Department issued a statement saying they were just following orders because Rios had an arrest warrant stemming from a failure to appear for a traffic offense in neighboring Arlington County. The statement leaves out the fact that it was entirely within the responding officers’ discretion whether or not to charge Rios with destruction of property for digging in a public park, but they did anyway. Rios has since been transferred to the Arlington County Jail, which appears to provide much more robust support for inmates in need than the Fairfax County Adult Detention Center. He has a hearing in Arlington for his traffic case this Monday. I spoke with Rios’ lawyer who told me that part of the reason Rios was held without bond is because he has no address of record. The Lamb Center of Virginia is reportedly working to find housing for Mr. Rios. Virginia Cop Block has paid off Rios’ outstanding traffic ticket so that he no longer has to deal with that obstacle as he tries to get back on his feet.

Rios’ lawyer also said that the city’s case was likely more about assigning costs for repairing the “destruction” of property than jail time. What justice is served by fining a man who cannot even afford housing for the cost of backfilling public property with equipment and work crews already paid for with tax dollars? It’s not like they are going to reimburse the taxpayers. All this does is set Mr. Rios up for future arrest for a fine he cannot pay.

How You Can Help

We are urging people to call on the Fairfax City/County Commonwealth’s Attorney (what prosecutors are called in Virginia) to drop the destruction of property charges. Please call 703-246-2776 on Monday, December 21st and ask them to stop prosecuting this industrious man who harmed no one and is trying to turn his life around.

Please also consider giving to the Go Fund Me set up for Rios so he can spend the holidays in a real home free of harassment from state agents.

This article was crossposted on virginiacopblock.org