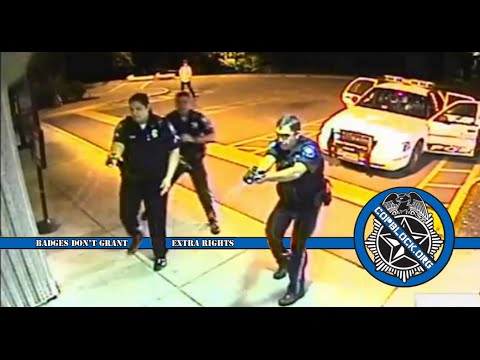 Earlier this week, it was reported that officers involved in the fatal tasing of Linwood Lambert Jr. in South Boston, Virginia falsified their arrest reports in order to justify repeatedly deploying their tasers. Even though the video clearly shows otherwise, they described Lambert as having gotten back up after being tased and one of the officers also claimed that he was grabbing her taser and pulling on it.

Both the dash cam video from the police car and the hospital’s surveillance video shows neither of those claims to be true. Lambert had his arms cuffed behind his back from the beginning of the incident and was subsequently restrained by leg shackles during the attack. So it’s unlikely he was even capable of doing so.

Although, it’s not likely given the free pass cops usually get when they beat, murder, and otherwise abuse people, the lies included in their reports aimed at justifying their deadly actions, potentially could in and of themselves be grounds for legal charges against Cpl. Tiffany Bratton, Officer Clifton Mann, and Officer Travis Clay.

According to the newly obtained investigation files, Cpl. Tiffany Bratton, who discharged 15 of the tasings, told investigators when she tased Lambert, he “was lying on his back” and he “grabbed the end of the Taser and was pulling it.” She “stated this probably happened several times,” according to investigators.

But the video does not show Lambert ever grabbing a Taser.

In addition, his hands were cuffed behind his back throughout the tasing – making such an action physically unfeasible.

Bratton also claimed the repeated tasings were needed because after Lambert was tased, he kept getting back up – four times in all.

A state investigator writes that once Lambert was first tased in the hospital doorway, Bratton said after about “five seconds” he “got back up.”

Another officer, Clinton Mann, told state investigators Lambert “jumped up” once after a tasing.

On the video, however, Lambert is never seen getting himself up on his feet after the first tasing.

Instead, the video shows his body went stiff and dropped after the first tasing in the hospital doorway. Then he mostly rolls around on the ground, according to the video, and asks the officers to stop. While he is on the ground, they also shackle his legs.

Bratton’s claims to investigators, now public for the first time, are legally significant for two reasons.

If prosecutors believed Lambert did repeatedly grab an officer’s weapon and get up after tasings, that alleged conduct might justify additional tasings.

“If an officer credibly stated that a suspect was trying to get the Taser several times, than that would certainly justify elevating the force used by the officer,” says Kendall Coffey, a former federal prosecutor.

So while Bratton’s claims are not supported by the video, the claims could provide an internal written record that would seem to cut against charging the officers. (There is no indication that police planned to release the video, or expected it to be made public during the 2013 investigation.)

Second, it is a crime to deliberately mislead state investigators, a separate charge that prosecutors could investigate.

“In Virginia, it’s a Class 1 Misdemeanor – it carries up to 12 months in jail – for any person to knowingly and willfully make a materially false statement to any law enforcement officer investigating the commission of a crime,” said Steve Benjamin, a Virginia defense attorney.

That crime, obstruction of justice, covers “materially false statements” made to law enforcement officers “conducting an investigation of a crime.”

The Virginia State Police, which led the state investigation into the tasing, indicate Bratton made the claims to a law enforcement officer investigating the tasing, Agent Kevin George, in May 2013.

Benjamin said a claim about “whether the suspect was lunging for a taser” is material, and prosecutors would also analyze whether it was deliberately misleading.

Coffey, the former federal prosecutor, said “if an officer states to a police authority that the suspect was resisting – grabbing a taser – at the time the suspect was handcuffed, that’s serious matter. It certainly could be considered a charge for making a false statement,” he told MSNBC.

Rod Sager, who served as a federal prosecutor in Virginia for six years, told MSNBC a false statement made to investigators can also give prosecutors wide leverage in a case. “A potential false statement is always helpful,” he said, and can be used in cross examination “should that person go on trial and take the witness stand.”

The investigation file also includes a handwritten statement from Bratton, dated the day of the incident, which claims Lambert got up three times during the tasing, but does not claim he ever grabbed her Taser.

In addition, case files that have since been released show police “investigators” disregarded video evidence that contradicted those reports in order to avoid holding officers accountable. Also, Prosecutor Tracy Quackenbush Martin was privately criticized heavily as being indecisive for refusing to formally declare the officers would not face charges by Virginia State Police “investigators,” when pressured for one. Martin had initially stated she didn’t believe charges should be filed against the officers, but then expressed misgivings about the quality of the investigation by Virginia State Police.

Once again, Via MSNBC (same story):

While Bratton’s claims are contradicted by the videos, which show multiple angles of the entire tasing, the State Police investigation summary does not address those discrepancies.

Running slightly over two pages, the summary provides a terse and often incomplete synopsis, apparently relying more on the officers’ testimony than the video evidence.

It only uses two sentences to independently characterize the tasings:

The reference to subduing Lambert does not mention the fact that officers shackled his legs before placing him in the car.

That detail is legally critical, since police rules prohibit tasing a restrained subject, and a shackled suspect is less likely to pose the kind of danger that justified continued use of force.

The investigators’ assertion that Lambert was “uncompliant” and “resisting” when put back inside the car is also relevant to the use of force. Jim Cavanaugh, a former ATF agent who reviewed the videos for MSNBC, said Lambert was largely unable to resist at that point in the car.

“He’s shackled to the maximum already, hands behind his back and his legs shackled, and he’s in the back of a locked patrol car,” said Cavanaugh, an NBC law enforcement analyst.

“There’s not much resistance you can offer – in attitude, maybe, but it’s not a resistance where he’s putting anyone in danger that would merit the using of an intermediate weapon like a taser,” said Cavanaugh.

While some of the summary’s statements could sound like legal conclusions, the State Police documents include a generic disclaimer stating that they do not contain “conclusions of the Virginia State Police.”

The investigation summary’s only other discussion of tasings is limited to counting the total tasings and reciting the officers’ defense of their use of force.

The report recites Bratton’s defense, noting she said “several” of her tasings “had no effect” and she “accidentally” discharged her Taser “while struggling with LAMBERT all with no effect on him.”

But the investigators do not attempt to verify Bratton’s assertion that her tasings had “no effect” on Lambert, nor whether she actually was physically “struggling with” him during the tasing – an apparent reference to her claim that Lambert grabbed her Taser.

The summary also cites a few witnesses and notes Lambert’s autopsy listed the cause of death as Acute Cocaine Intoxication. (Lambert had “less than 0.01 mg/L” of cocaine in his blood – a relatively low level that could still account for an overdose.)

“Videos from patrol cars and video from Halifax Regional Hospital were obtained and viewed,” the report states, “These videos document and record this incident.”

All told, the investigation summary, prepared five months after the incident, is striking for its cursory and at times incomplete evaluation of the night’s events. Investigators do not explain why all the video evidence went largely unused, or why the officers’ side of the story is recited without any evident attempt at verification.

A source with knowledge of the state police files, who did not want to be identified discussing an open case, said the files show “it doesn’t look like they investigated anything – they don’t even use the videos.” (Emphasis added)

The investigation’s contents are legally significant because, in Virginia, they provide the foundation for a prosecutor’s decision of whether to press charges. The local prosecutors, called Commonwealth attorneys, rely on the State Police for both the initial inquiry and most follow-up investigative work regarding potential misconduct by local police.

The prosecutor in charge of the Lambert case, Tracy Quackenbush Martin, told MSNBC this week that “the Virginia State Police investigation left questions unanswered that must be answered – questions that would not have been contemplated by the State Police Investigator, and that I didn’t fully develop until I had consulted extensively with colleagues,” she said.

“The State Police’s job is primarily to gather facts, and my primary job is to assign value to those facts and draw legal conclusions from those facts,” she said, adding, “I’m not going to apologize for being circumspect and thorough.”

Much like other recent cases of police unnecessarily killing people on video, such as Laquan McDonald in Chicago, the video of Lambert being tased over twenty times was withheld from public view until a lawsuit filed by his family forced its release. (That video can be viewed below.)