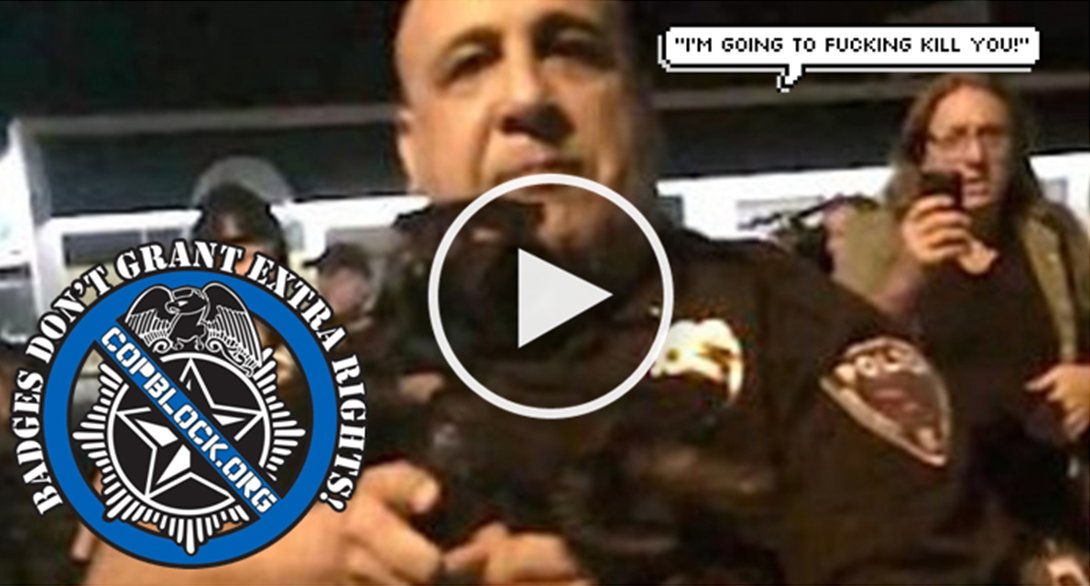 Former St. Ann police Lt. Ray Albers said Wednesday at an administrative hearing at the Missouri Department of Public Safety, that his life was “ruined” after video emerged of him pointing his AR-15 assault rifle at Ferguson demonstrators and threatening to kill them last year.

In the wake of the incident, Albers resigned from his position but is now fighting to keep his law enforcement license with attorneys arguing that he “showed great restraint” on Aug. 19, 2014 when he raised his weapon at crowds and threatened to “fucking kill them.”

In footage filmed from the scene, Albers can be seen training his firearm on people before a man responds by saying, “Oh my God, gun raised, gun raised. My hands are up bro, my hands are up.”

“I’m going to fucking kill you, get back, get back!” Albers says.

“You’re going to kill him?” another individual asks before man says, “Did he just threaten to kill me?”

Albers is then asked for his name and he responds, “Go fuck yourself.”

The footage then shows a cop with the St. Louis County police department come over and place his hand on Albers’ weapon in order to lower it.

The state of Missouri contends that Albers violated state law and acted “without legal justification” in the incident as he made explicit threats to commit a murder.

At the administrative hearing on Wednesday, the Missouri Department of Public Safety urged the state’s Administrative Hearing Commission to take disciplinary action against Albers by suspending or permanently revoking his law enforcement license.

The former officer’s lawyer mounted a defense that because other cops were filmed and photographed pointing firearms at protestors, it is “unfair” to make Albers “the poster child” for bad policing in Ferguson. In other words, because other officers did it, Albers should not be held accountable.

Albers maintains that he was “approached by a mob of people” and saw a man with a handgun so he trained his rifle on him.

“I seen about a half a dozen black males come out of the east side of Sam’s Meat Market. They all had bandanas wrapped around their face, like an outlaw-type bandana,” Albers said. “Two of them at least [who] came out had Molotov cocktails. The other one had a handgun… ready to go.”

In videos played during the hearing however, at no point does he appear to be pursuing a “man with a gun.” Also, the incident occurred at a location far away from where Albers claims to have seen the armed “mob.”

In an interview in February, Albers asserted that he was suspicious the people that were recording him were going to try to take his weapon away and use it against him.

“I thought at that time that the only reason they would be coming towards me is to hurt me and take my weapon,” he said. “You don’t come towards an officer that has a rifle raised. Nobody in their right mind would do that unless they had bad intentions.”

Albers claimed at the administrative hearing that he didn’t have his rifle raised at anyone specifically. Instead, he said he was “using th[e] scope with the laser to find th[e] individual with a weapon.”

St. Ann police officials testified that even if there was someone in the crowd with a gun, Albers’ behavior was unacceptable because officers are not allowed to scan with their firearm because of the threat of accidental discharge.

Lt. Garrett Willis asserted that Albers should of had his weapon in the “low-ready” position where he could scan with his eyes. “You should never raise your weapon unless it’s a threat,” he said.

The Administrative Hearing Commission is expected to make a ruling on whether Albers can keep his law enforcement license in the coming months.