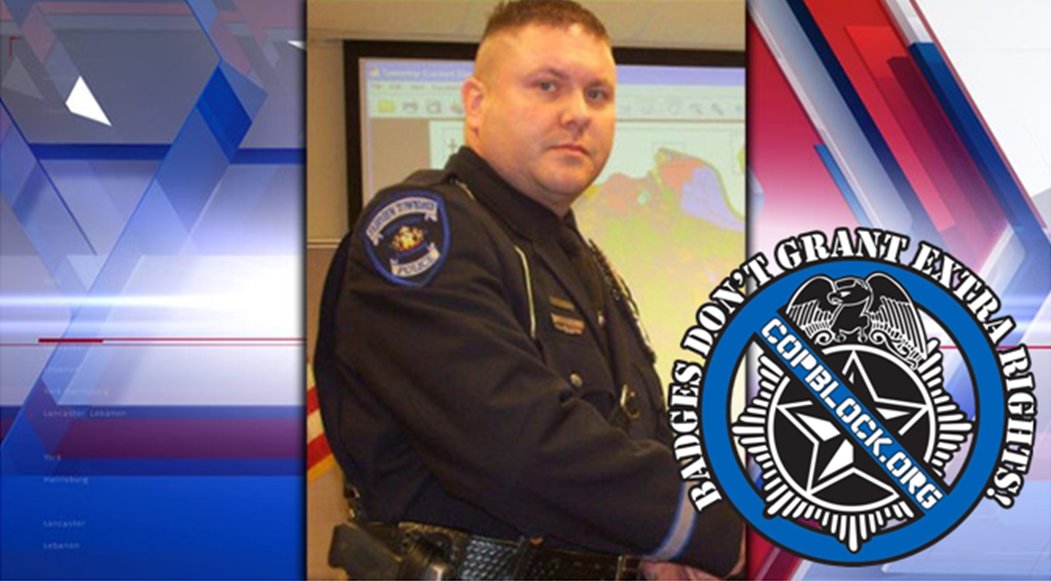 A Pennsylvania cop with the Fairview Township police department in York County was arrested on federal corruption charges after being duped by an FBI sting operation, the U.S. Attorney’s Office said Friday.

Federal prosecutors maintain that 41-year-old Tyson Baker stole money from drug traffickers who had been arrested and pulled over, removed money seized by his department from evidence, and provided false information to federal investigators.

The FBI says they have recordings of the 17-year veteran orchestrating robberies of drug traffickers during traffic stops, and using codes to talk about stealing cash when speaking to a fellow cop that was working as a federal informant.

The informant accuses the officer of stealing between $5,000 and $10,000 during a February 2012 traffic stop in which he says Baker lied about smelling marijuana and instructed him to draft an affidavit of probable cause for a search warrant.

No marijuana was found in the car and the informant says Baker searched the vehicle prior to receiving the warrant when he stayed behind to “secure” it – and “ripped off” the driver, who claimed he was in possession of $20,000 at the time.

During the official search however, only $10,000 was found, along with two stolen guns and a small bag of heroin.

Baker is also accused of orchestrating the theft of $2,000 in drug proceeds seized by his department during a search of a home where six pounds of marijuana and about $14,000 was recovered in November.

After the seizure, Baker asked the informant what was found on the call, and then pointed to the cash removed from the residence and said, “I like that a lot, be smart about this, don’t get greedy; smart amount.”

The informant says Baker was telling him not to arouse suspicion by taking a large sum of money and later “discretely” wrote a  on a piece of paper, “Money under carpet, carpet under locker,” in order to instruct him where to place the cash.

Finally on Wednesday, Baker received the ultimate amount of egg on his face when the FBI arranged a traffic stop in order to catch him red-handed.

Baker was told the car’s driver was a drug dealer traveling with a large amount of money, but instead, the occupant was actually an undercover agent who had the vehicle bugged with video recording devices.

According to prosecutors, Baker towed the vehicle to a secluded garage without a warrant and against orders, and searched a backpack in the rear of the vehicle where he found $15,000 and 400 Oxycontin pills.

Baker allegedly stole $3,000 before he spotted a camera inside the vehicle and tore it out. He kept $2,000 and gave $1,000 to the undercover informant.

On Friday, Baker was arrested and charged with violating the Hobbs Act, a federal statute that prohibits interfering with interstate commerce by force, violence or intimidation.

That charge carries a maximum of 20 years in prison and in addition, the officer faces two other corruption charges that each carry up to five year sentences. The case is still being investigated by the FBI and multiple other state and local agencies.