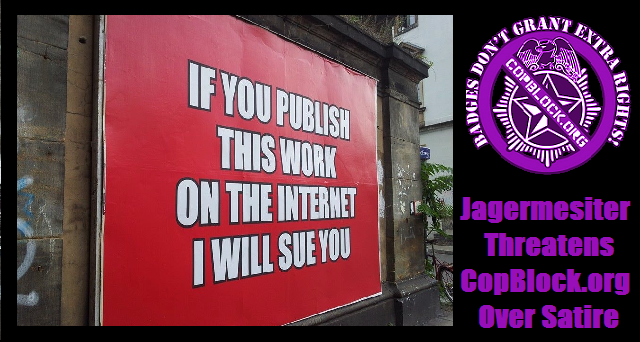 Today CopBlock.org recieved an email from the American branch of the German company who makes the alcoholic beverage Jagermeister regarding a satirical piece we ran last week that you can view right here. The initial e-mail suggested an illegal use of their name and imagery and requested we remove the article from the website and social media immediately. This was our initial response to that e-mail:

I’m sorry to disappoint you but I won’t be removing the satire piece written by Joshua (CC’d) and posted to CopBlock.org (or its social networks). Furthermore, you’d be making a very foolish decision by pursuing this any further. You won’t win anything from us in terms of legal remedies and even if you did, I think we’d benefit more from the PR of a lawsuit against us than you will in monetary claims.

Therefore, I’ll gladly accept your apology and a complimentary bottle of Slagermeister when it’s produced. Please inform your client of that.

I also spoke on the phone with the person who had written the email and assured her that parody and satire were fair usage and that it was clearly revealed in the tags and links that the piece was indeed of that nature. The call was brief and the person said they would pass my messages along.

A second response from the Jagermeister team was more persistent and threatening, insisting that their legal team was looking into it, and that we would be hearing from them. Throughout both of the e-mails (and phone call) we received the company seemed to think our satire was suggesting that they support Michael Slager, when in fact the satire was built around Jagermeister standing against killer cops by shedding light on police brutality through a new product. They also claimed that because our site was not strictly satirical that it was too easy for the article to be misconstrued as real. This time I replied:

CopBlock.org has posted several satirical pieces in the past, so a precedence for satire pre-exists this article.

Just as you expect your customers to understand the dangers of alcohol and get all the information and make informed decisions, we expect ours to read the article and the bits that indicate it is satire. We are not responsible for people misusing our product, any more than you are yours.

It seems you misunderstood the satire. It was not saying you support Michael Slager, it was saying you were doing your part to bring police issues to light, on the side of justice. If you just had poor reading comprehension and did not glean that, it is one thing, but if in fact you are against bringing light to the issue of police state violence and stand on the side of killer cops, that is very disturbing.

Please clarify your position on the matters. Our Moral Team is reviewing your reactions and will be responding in the near future.

Satire is a legally protected form of free speech in America. In Jagermeister’s native Germany, it is even written into their constitution. Exceptions are rarely made when the content is so vitriolic that it becomes slander, but in no way was the satirical piece I wrote intended that way, nor does it read that way.

The fact is that it is unlikely that the article would have even drawn any concern from Jagermeister had the hillbilly copsucker’s over at Citizens Against CopBlock not made a huge fuss about it. It would be a shame for the company to believe that our article had offended its demographic base solely on the idiotic behavior of our shadow trolls. CACB, cops and copsuckers are far more likely to beat their wives and kids while inebriated on light beer and schnapps. Whereas I spent enough on Jager in my early twenties that I could be a top stockholder now if i’d invested instead.

One thing I do know is that lawyers are expensive, and instead of having wasted all that money researching a potential legal slight that could be dismissed with a quick Google search and was meant in good spirits, Jagermeister could have donated that money to the victims of police brutality and their families, or to the CopBlock Network where it could be spent spreading the message that, “Badges Don’t Grant Extra Rights.” I would think that a German company would have enough historical context in the abuse of tyrannical power that they could stand proudly next to a message like that.

I highly doubt we will be facing Jagermeister in court. They have no case and it would be pretty bad for their reputation. Especially considering their demographic almost surely overlaps with ours to some extent. I would far prefer that they take the situation as inspiration to do something meaningful on behalf of victims of the police state, and would be willing to work with them to do so in a far less bombastic way than my initial satire suggested. But if they do decide to bring a lawsuit against myself or CopBlock.org, they will find themselves trying to squeeze blood from a turnip and looking like greedy corporate monsters while giving us a whole helluva lot of exposure. Either way, the ideas we promote will still win, regardless.

One last point I would like to make, not necessarily regarding the rift with Jagermeister, is the response we often receive to satirical pieces. We are accused of being misinforming and condescending and jumping the shark of police criticism. However, satire has been an important part of western thought and media for thousands of years. The Greeks and Romans employed it regularly and more contemporary intellectuals, writers and humorists such as Voltaire, Jonathon Swift, Mark Twain, George Carlin and Bill Hicks used it to high degrees of success. Satire and parody are humor. Humor is a powerful tool for social awareness. It is also the honey that makes the bitterness of the police state easier to swallow. So before you criticize me/us for stepping away from the strictly serious, be sure that you aren’t just lashing out against the minor slight against your pride for having fooled you for a minute. Even the brightest folks fall for satire sometimes, which is what makes it so potent and effective. By viewing our own beliefs in a mirror of absurdity, we are able to gain a larger view than the little reality tunnels we spend most of our time looking through. And that is beautiful.