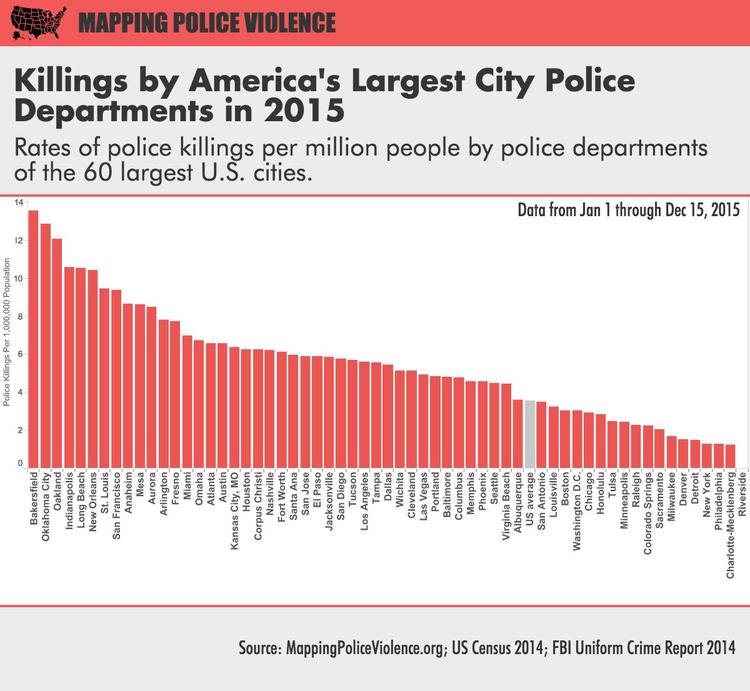 *This article was originally posted at Vanity Fair by Kia Makarechi.*

A new report by Mapping Police Violence on Monday found that the Bakersfield Police Department killed more people per million residents than any other large police department in the United States.

According to the data set, the California city’s police department killed 13.6 people per million residents. Police violence in the region has attracted greater scrutiny this year: The Guardian ran a five-part investigation into actions of police in Kern County, whose officers it called “America’s deadliest police.”

Bakersfield has a population of 368,759, according to the 2014 Census. Mapping Police Violence identified five people killed by officers there in 2015. VF.com reached out to the Bakersfield Police Department for comment and will update this post should we receive word.

Mapping Police Violence is made up of DeRay McKesson, Johnetta Elzie, and Samuel Sinyangwe. McKesson and Elzie are well-known activists who rose to prominence during the rise of the Black Lives Matter movement, and Sinyangwe is an activist and data analyst.

“We wanted to dispel the notion that police violence is linked to community violence,” McKesson said in a telephone interview. Mapping Police Violence’s data showed no correlation between police killings and violent crime in the included communities. “The second takeaway is helping people understand police violence in the context of cities across the country, and relative to each other.”

Over the course of the past two years, a number of high-profile officer-involved deaths of black Americans have prompted outcry and protests in cities across the country. Lacking federal data on fatal officer-involved shootings prompted a number of organizations and publications to create tracking mechanisms. According to Mapping Police Violence, police killed 1,152 people between January 1 and December 15. The Guardian counted 1,101 deaths as of December 21, and The Washington Post tallied 944 people who were shot dead by police, as of December 21.

Identifying the number of officer-involved deaths is the first step toward what activists hope will be a wave of systemic change. McKesson pointed to Campaign Zero, an initiative he and other activists launched earlier this year, as a resource for people who wish to become involved. The campaign highlights 10 buckets of reform, which span police practices, investigations of police use of force, and police union contracts.

In the report released on Monday, Mapping Police Violence said 41 of the nation’s 60 largest police departments “disproportionately killed black people relative to the population of black people in their jurisdiction,” and that 14 police departments—including St. Louis, Boston, and Philadelphia—exclusively killed black people. The organization, which merged data from FatalEncounters.org, the U.S. Police Shootings Database, and KilledbyPolice.net, also included police-involved deaths that the group said were reported in the media, but not by police.

“We encourage many more investigations by the Justice Department, including in Bakersfield,” McKesson said. “What’s interesting about Bakersfield is that it’s a city that, when people think anecdotally about police violence, it doesn’t come to mind. They think about Chicago and other cities. The police in Bakersfield appear indiscriminately violent. The takeaway, though, is the takeaway from the last year: this issue is closer to people than they think.”