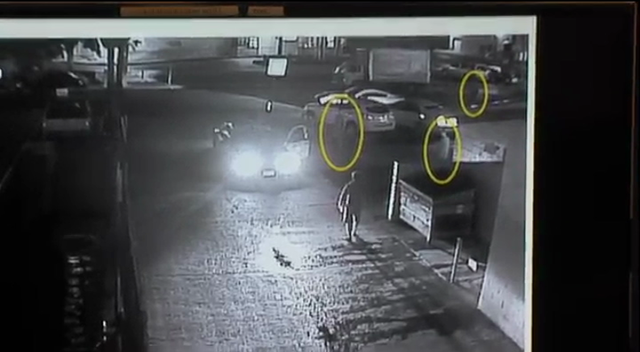 Fridoon Rawshan Nehad, 42, was shot and killed April 30 by a San Diego Police Department Officer – Neal Browder – in San Diego’s Midway District. The shooting was captured on surveillance video from a nearby business and was just released to the public.

While the focus (by police and the media) of the video, see below, has been on the call to police about a man [Nehad] with a knife and that he was twirling a ‘metallic’ pen, the video makes those a hard sell for me. As you watch the video, ask yourself, what could Browder have said the Nehad before shooting him? Did he have enough time to say, “Drop the knife!” Or, “Show me your hands!” Even “Freeze” doesn’t seem to fit.

Maybe I’m crazy or, as the trolls and CopSuckers will say, just grasping at straws, doing my best to make this an unjustifiable shooting by a police officer. Right? Those who think such would say that Nehad shouldn’t have been twirling around a pen “LIKE” it was a knife and deserved what he got. Right? The police can’t risk their lives trying to determine if a person has a mental illness or a weapon. Correct?

So, back to my question. After watching the video above what do you think Browder said to Nehad when he exited his car? Do you believe he said, “Freeze?” “Drop the knife!” Anything?

The fact that a caller said he had a knife and that he was twirling a pen like a knife are NOT justifications for police to roll up and open fire on people. Browder had a number of choices that night. Exiting the car and firing two shots was the worst of them. He could have followed the man, who was on foot (walking towards a police cruiser!), until backup arrived. Taking that extra time to confirm that what the man had was (or was not) a weapon. He could have used his door as a shield and said, “Don’t move, get on the ground and open your hands.” He could have done a whole lot of things besides shoot.

I can already hear the “Monday Morning Quarterback” comments, please, spare me. The police claim to be the only thing between order and chaos. That without the thin blue line we’d all live in a chaotic state of uncertainty, with thieves and senseless killings, all around us. Yet, the police are ones who freak out on people carrying pens and screwdrivers (see video below) who have mental health issues.

Police claim to put themselves at risk each day they go to work but in the videos we see, police are routinely overreacting to loosely perceived threats. Is this because they live/work in constant fear? Is that why police are so quick to pull the trigger? Is it their training? Is it the mentality of the a police officer to kill? Are there too many laws?

These questions never get asked when the blame is always placed on the victim or perceived threat.

The lives lost are just the tip of the iceberg. Everyday the police extort money, intimidate and coerce people into compliance with laws that are unjust, fail to protect anyone and have no actual purpose. Why are actions, like the war on drugs, minor vehicle violations and other victimless crime violations allowed to be a facet of policing?

If the police, and the state agents alike, continue to justify police killings with such weak and worthless narratives, what are our next options? Can we allow them to continue to murder and wipe aside responsibility each time an officer says they were in fear of their lives? No we can’t, we all know that, but what we don’t know is how to change it.

That answer will only come when enough of us demand a change from the police. When we bring the real questions to the table.

For now, you can join the CopBlock Network and start working with people to help spread the message that, “Badges Don’t Grant Extra Rights.”

Or sign up for the CopBlock Weekly Email HERE.

ADDITIONAL FOOTAGE PROVIDED BY THE STATE TO BACK ITS CLAIMS: