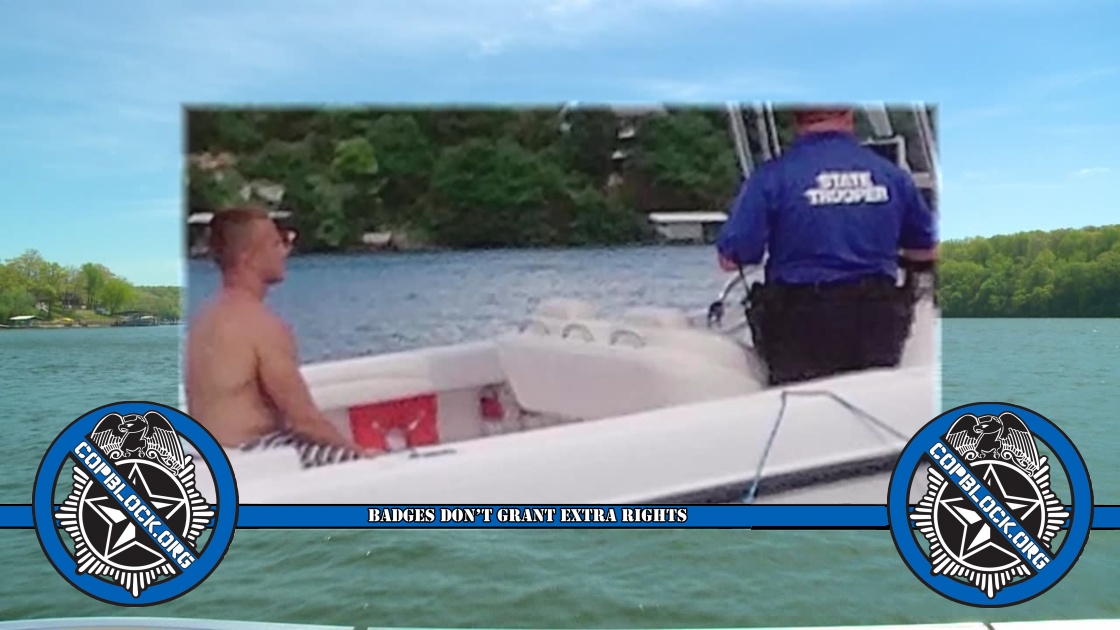 On December 18, Missouri Highway Patrol Trooper Anthony Piercy was charged with involuntary manslaughter for the 2014 in custody death of Brandon Ellingson. As has been reported previously here at CopBlock.org, Ellingson drowned after falling out of the boat he was being transported in after being arrested for boating while intoxicated at the Lake of the Ozarks.

Ellingson’s hands were cuffed behind him making it impossible for him to swim once he went overboard. Negligence by the police involved via the excess speed of the boat and the fact that a life vest was not properly used have been blamed for his death. The life vest was place over Brandon’s arms after he was cuffed and came off once he was in the water.

Special prosecutor William Camm Seay announced the charge of involuntary manslaughter in the first degree against Trooper Anthony Piercy outside the Morgan County Justice Center. The charge is a Class C felony carrying a punishment of up to seven years in prison, up to a year in the county jail, a $5,000 fine or a combination of those.

“I have reviewed boxes and boxes of reports and records in regard to Mr. Piercy’s training and experience and everything that was done in the investigation,” he said. “I have charged him (Piercy) with recklessly causing the death. … It relates to an unjustifiable risk being taken…”

Within days of Brandon Ellingson’s death, The Star began investigating the incident. Over the next year, the newspaper uncovered many discrepancies in Piercy’s story from that day, as well as missteps in a merger of two state patrols that allowed the veteran road trooper to patrol the lake alone with minimal training…

Ellingson, of Clive, Iowa, drowned May 31, 2014, while in Piercy’s custody. The college student had been enjoying a long weekend at the lake with friends when the trooper pulled him over for boating while intoxicated. The trooper then, according to Ellingson’s friends who watched the arrest, placed an already buckled life vest over the handcuffed man’s head and didn’t properly secure it.

Piercy pointed his boat toward a patrol zone office about 8 miles away. GPS records later indicated he reached a maximum speed of 46 mph during the ride. About halfway there, Ellingson went into the water.

His life vest came off a short time later, and though Piercy eventually jumped in, he was unable to save Ellingson. Divers recovered the college student’s body the next day from the lake bottom, about 70 feet below the surface. Initially, “investigators” had refused to file charges or discipline Piercy in any way for his careless and deadly actions, even going so far as to punish another trooper that spoke out about the problems in the case. That trooper, Sgt. Randy Henry, who was contacted by Piercy after the incident, is now retired and has criticized Piercy’s actions and classified the investigation as a cover-up.

Once again, via KansasCity.com:

Sgt. Randy Henry has said that a litany of things went wrong from the time Piercy pulled over Ellingson’s boat.

Warning: offensive language. Trooper Anthony Piercy called a supervisor at 6:28 p.m. May 31, 2014, about an hour after Brandon Ellingson drowned in the Lake of the Ozarks. Piercy placed the call from the boat of Cpl. David Echternacht. A microphone picked

Henry also has contended that patrol officials tried to paper over serious problems revealed by Ellingson’s death, in part to shield Gov. Jay Nixon from criticism for pushing the 2011 merger of the state Water Patrol into the Highway Patrol.

“There’s been a cover-up from the beginning,” Henry recently told The Star. “They wanted to protect the governor and the merger and protect Piercy from criminal charges because criminal charges would be a black eye for the patrol…”

Hours after Ellingson drowned, Henry said, Piercy told him key details that differed from accounts the trooper subsequently gave to Highway Patrol investigators and jurors at the coroner’s inquest.

According to Henry, Piercy said he was “in a hurry” when he put a life vest on Ellingson. Piercy also told the sergeant that Ellingson was on his feet, leaning against the boat seat, before he went into the water. That corresponds with what two witnesses saw when the patrol boat passed them moments before Ellingson went into the lake.

However, Piercy told investigators that Ellingson was sitting in the boat and then stood, turned to the water and went in.

An investigator asked Piercy, “Did he jump over? Or did he fall over?”

“I don’t know,” Piercy said. “I’ve, believe me, played this scenario through my mind a million times, and I don’t know. All I know is he’s beside me, and then he’s not.”

At the inquest, Piercy said he saw Ellingson stand, turn toward the water and step to the right side of the boat. As he told the story to jurors, Piercy began to choke back tears: “I reached for him and wasn’t able to grab ahold of him.”

GPS data showed that in the moments before Ellingson hit the water, Piercy’s boat was traveling between 39.1 and 43.7 mph.

Seay, in a statement Friday, said Ellingson was ejected from the boat when Piercy “suddenly slowed down on the choppy water to meet a large wake.”

Piercy also told Henry the night of the drowning that once he jumped in to help Ellingson — which witnesses have said took several minutes — the trooper waited for his own fanny-pack flotation device to deploy automatically. It didn’t.

Henry told Piercy that his device required him to pull a ripcord. A witness who came upon the scene that day and helped get Piercy out of the water, also told The Star that the trooper complained his device didn’t deploy in the water.

But at the inquest, three months after that conversation, Piercy described the fanny pack as one that deploys when the ripcord is pulled. He told jurors that when he was underwater, trying to grab Ellingson, he didn’t want to pull the ripcord to inflate his fanny pack. If he had, he said, he would have risen to the surface without the Iowa man.

Many have questioned why Piercy, knowing Ellingson was in handcuffs, didn’t jump into the water sooner. One witness, Larry Moreau, told The Star that he and his wife saw the trooper standing on the boat and talking to Ellingson as he bobbed in the lake. Piercy showed no urgency, Moreau and wife Paulette said.

The couple had no idea that beneath the surface, Ellingson’s hands were cuffed behind his back. They left the area before Piercy jumped in, thinking the trooper had everything under control.

Henry also has questioned Piercy’s delay in jumping into the water.

“I think his failure to jump in immediately was cowardice,” Henry told The Star recently. “If I threw somebody out and he was handcuffed and I see the life vest come off, you jump in now. You go in immediately.”

Henry spoke out at two legislative hearings after Ellingson’s death. He was the officer who signed off on Piercy, saying Piercy knew the lake well enough to navigate it. But road troopers were never intended to solely patrol on the water without more training.

Henry also was interviewed by Highway Patrol investigators. When he started to question whether Ellingson received “the highest degree of care,” quoting Missouri boating law, one investigator rushed to have the recording shut off. During that interview, Henry told The Star, he told investigators: “To me, it rises to the level of manslaughter.”

Henry was disciplined by the patrol for actions related to the case after Grellner filed a complaint against him.

After nearly 30 years patrolling the Lake of the Ozarks, he was transferred to Truman Lake and demoted to corporal. He appealed.

Grellner dismissed her complaint against Henry in October, and he filed papers to retire.

“Brandon shouldn’t have died,” Henry said. “It’s something I’m going to have to live with the rest of my life. There’s no turning the page back. Piercy shouldn’t have been out there.

“In the history of the Water Patrol, we have never killed somebody in custody.”

After the criminal charge Friday, Henry said: “I’m finally glad to see a neutral set of eyes came to the same conclusion I had all along. The whole chain of events was a gross deviation from the level of care that a reasonable person would have used in the same situation.”

Ultimately, it was the refusal of Ellingson’s family and others within the community to accept the decision by previous police “investigators” that this was just a mistake that led to charges finally being filed against Trooper Anthony Piercy 18 months after his negligence and lack of concern led to Brandon’s death.