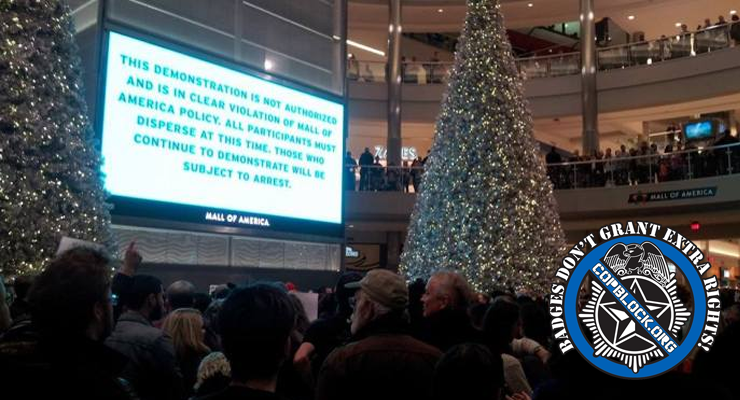 The anticipated protest at the Mall of America in Minneapolis went forward today in spite of a restraining order against it. MOA management had sued eight individuals involved with the Black Lives Matter movement in Minneapolis in an effort to stop the protests. That lawsuit included the demand that they post on social media sites and send out text messages stating that the protest was cancelled. Failing to do so would result in jail time. (It wasn’t really clear whether adding “wink, wink” at the end would violate that ruling.)

Ultimately, three of the eight were legally barred from MOA property by the court. The request for them to send out messages telling others not to come was ruled unconstitutional by the judge presiding over the case.

Regardless of that, protesters showed up in large numbers at the mall to protest the shooting of Jamar Clark. Reportedly, as many as twenty people were arrested and many businesses closed during the protest, which has been dubbed #BlackXmas on social media, rather than deal with the disruption. However, the bigger twist was that #BlackLivesMatter Minneapolis declared that the publicized protest at the Mall of America was really just a decoy.

Stores closed their gates, kiosks were covered and even Santa left his sleigh at massive suburban Minneapolis mall shortly before protesters gathered Wednesday afternoon, one of the busiest shopping days of the year. They abruptly walked outside while chanting, “What do we want? Justice! When do we want it? Now!”

Organizers said the rally was intended to draw attention to the police shooting last month of Jamar Clark. The 24-year-old black man died the day after he was shot by Minneapolis police responding to a recent assault complaint.

Instead many of the protesters left the mall within a short amount of time and boarded trains or buses headed to the Minneapolis St. Paul Airport, as well as Highway 5 and other roads near the airport. Two of the security checkpoints at the airport were reportedly closed for about an hour and half.

We just shut down America’s biggest mall, a light rail, the highway and an International airport. #BlackXmas is in full effect #BlackXmas2

Protesters with Black Lives Matter only briefly gathered at the Mall of America Wednesday afternoon before boarding light rail trains and heading to Minneapolis-St. Paul International Airport in an attempt to “shut it down.”

There, groups of protesters gathered at both terminals around 2 p.m., blocking traffic on Highway 5 and the roads into both terminals. Not long after, the State Patrol ordered the protesters to disperse. An airport spokesman told the Associated Press several people were ultimately arrested in the protest.

Still, traffic into the state’s main airport was at a virtual standstill the day before Christmas Eve, and a backup persisted into the afternoon. Terminal 2 checkpoints for Southwest and Sun Country airlines were temporarily closed to prevent protesters from gaining access to the secure areas of the busy airport. They were reopened at around 3:30 p.m.

Random arrests happening at MSP Airport. Like this one – he clearly did NOT touch the policewoman but was instead assaulted. Today, the only danger at the MOA, the light rail & the airports were hundreds of agitated & armed riot cops escalating, arresting & mercilessly punching peaceful protesters.#BlackLivesMatter #Justice4Jamar #BlackXmas(video: bengarvin)