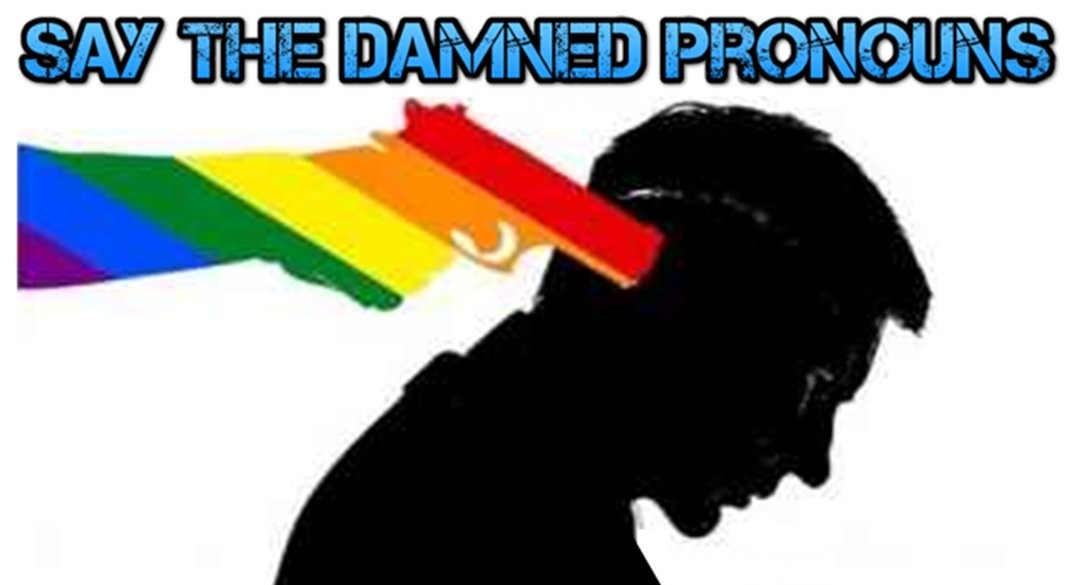 In another confirmation that political correctness means a draconian police state, updated so-called “transgender discrimination” laws in New York City will see landlords, employers and businesses fined and possibly jailed for refusing to say that biology does not exist.

That’s right, if property owners identify employees or tenants by their 23rd chromosomal pair by using “improper pronouns” in reference to those who “don’t identify with the gender they were assigned at birth,” they could now see fines of up to $250,000.

According to NYC.gov, the guidance lists several ways employers, landlords, and business owners can violate the law:

Violations of the law could result in penalties of up to $125,000, and up to $250,000 for incidences that are deemed “willful, wanton, or malicious.” In addition, there is no limit to the amount of compensatory damages the Commission may award “victims.”

“Far too often, transgender and gender non-conforming individuals suffer discrimination, harassment, and violence on a scale many cannot imagine,” New York City Human Rights Commissioner Carmelyn P. Malalis said. “New York City does not and will not tolerate discrimination on the basis of gender identity or gender expression. Today’s guidance makes it abundantly clear what the City considers to be discrimination under the law and the Commission will continue to aggressively enforce protections to make that promise a reality.”

The subject of discrimination is a tenuous and emotional one that conjures up visions of the segregated Jim Crowe south. Those who support so-called positive “anti-discrimination” obligations (laws) however, must contend with the reality that such advocacy eliminates the negative (property) rights of others. (See: positive rights vs. negative rights)

Its important to point our that segregation in the U.S. was mandated and institutionalized by government. Instead of simply fighting to repeal such laws, the “civil-rights” era committed a usurpation of liberty by swinging the pendulum all the way back in the other direction and using government to force individuals to associate with those they may not wish to.

In other words, the state went from mandating segregation to mandating association – two equally appalling evils. In a civilized society, individuals would have the right to freely choose for themselves with whom and how they wish to associate. I know, freedom of association, what a radical idea.

All “rights” should be property rights – ultimately deduced from the primary ownership of ones own body. As such, the fruits of what said body produces in the form of the contractual acquisition of external property, should not be subject to dictation from those that have no claim over them.

It is absurd to believe that one has the “right” to something someone else has to provide for them with their own resources – like a “gender-neutral” restroom or sexual reassignment surgery. One only has the “right” to exercise their own preference and set rules on their property.

If landlords or business owners insist on calling someone a “he” because he has a penis – and they don’t like it – then he can find another place to work or live if it means that much to him. This relationship exists on a completely voluntary basis. There is no force being applied that relegates him to endure perceived bigotry on behest of a private property owner. He will need to make his own cost-benefit analysis of whether or not it is more in his interest to maintain the association or eliminate it.

How infantile. Isn’t it interesting how those that claim to be interested in diversity and tolerance are the first to run to the government to suppress and harass those with contradictory views?

There has been little mentioned in the mainstream media about how exactly the new “anti-discrimination” law updates will be enforced, but predictably, they will ultimately be enforced like all other government edicts – by men with guns (police).

Even if police aren’t immediately turned to in the wake of a perceived slight, fined property owners who refuse to be extorted will be faced with a decision: either pay up, have their property stolen by the state in lieu of the fines, or perhaps be thrown in jail. Now that’s what I call “progressive.”

New York City Mayor Bill de Blasio has been at the forefront of such Orwellian thought-policing. In September, he lauded a program currently being implemented in cities across the globe on behest of the United Nations and an ultra left-wing European think-tank (Institute for Strategic Dialogue) for its intent to protect citizens against “all forms of violent extremism, whether it’s based in religious, or racial, or nationalistic, or ideological intolerance.”

Dubbed the “Strong Cities Network,”the international program already includes 24 cities around the world including New York, Atlanta, Denver, and Minneapolis in the U.S. – and amounts to nothing more than a new global police force which is to be utilized to fight political incorrectness.

Decried by critics as amounting to “nothing less than the overriding of American laws, up to and including the Constitution, in favor of United Nations laws” that would inevitably be implemented in the country without any Congressional oversight, the Obama Justice Dept. described the program in a press release stating:

The SCN will connect cities, city-level practitioners and the communities they represent through a series of workshops, trainings and sustained city partnerships. Network participants will also contribute to and benefit from an online repository of municipal-level good practices and web-based training modules and will be eligible for grants supporting innovative, local initiatives and strategies that will contribute to building social cohesion and resilience to violent extremism.

To understand the implications of such a program, and for more information on who is involved in implementing it and just what they consider to be “extremism,”  CLICK THIS IMPORTANT REPORT. See also: The Case for Discrimination by economist and political theorist Dr. Walter Block.