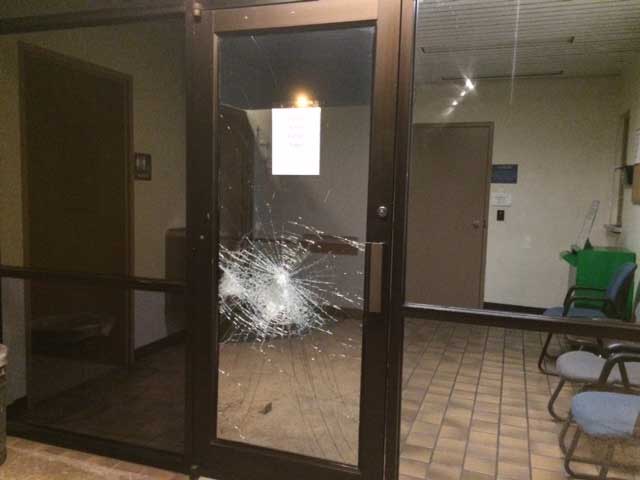 “Sticks and stone may break bones” is how the saying goes. Today, the Phoenix police added their own verse, “but if you throw them at us we’ll kill you.”

That’s what got 41-year-old Lonnie Niesen shot and killed, by police, in front of the Cactus Park police station the day after Christmas. Police said he was walking down the sidewalk when he threw a rock at a passing police cruiser. By the time the officer had turned his vehicle around to make contact with him, he was was already at the police station. News footage showed the rock caused a very small dent on the lower driver door.

There was an officer coming outside on foot from inside the precinct to assist,” Howard told reporters, “when the man took a big rock and threw it, breaking the glass at the front door of our police precinct.”

At the police station the man continued to throw rocks and an officer came out of the police station. After a rock bounced off a tree and hit the officer in the hand, he pulled out his gun and shot the man one time. The man succumbed to his wounds and was pronounced dead at the hospital. The officer who shot him was treated at the station for an injury to his hand.

That officer returned by shooting one time with his gun, striking that suspect and ending this violent encounter,” Phoenix police Sgt. Jonathan Howard said at a media briefing.

In my opinion, police officers need to be more resilient and less prone to lethal force as an immediate reaction. I have no proof but I have a sinking suspicion that trying to deescalate the situation, even if it meant more damage to the police station, would have resulted in a more favorable outcome for both Mr. Niesen and the officer who killed him.

Lonnie’s family told police, that he had stolen liquor and a gun on Christmas, on Saturday he was drunk and making suicidal statements to his family when he returned the firearm. Whether or not Lonnie was trying to commit suicide by cop or was just making poor decisions due to alcohol impairment will never be revealed.

You know what else may never be revealed? The video surveillance footage from the department. Not a single one of the articles about this incident mentioned potential video records captured by the police department’s surveillance system.

Police surveillance camera footage was evidence in my trial for chalking the Fresno peace officers memorial, in front of the Fresno police headquarters, last year. Surveillance footage of Ademo and I using sidewalk chalk in front of the Noblesville police department, was included in our discovery for this current legal fiasco in Indiana. Factor in pretty much every interaction with the government is recorded in some fashion, it’s pretty likely that a surveillance camera captured the actions of the officer before he killed a man for throwing rocks.

This is not the first person killed this year for throwing rocks… in February officers with the Pasco Police department killed Antonio Zambrano-Montes for throwing rocks at them. They fired 17 rounds and killed him in the streets, with people stuck in traffic sitting in their cars. Montes had his hands up when he was killed but no charges were pressed against the officers as they claimed the rocks were being used as a deadly weapon.

Another thing I find interesting about these shootings is that the stand alone individual is preyed upon for the mildly aggressive behavior of throwing rocks. If you replace the lone person with a group of people throwing rocks at the department, would the police just come storming out and kill everyone? Probably not. The police would at least make an attempt at some form of communication before lethal force was considered.

Why then when they have the numbers and the means to apprehend people throwing rocks do they choose instead use lethal force?

Before this is forgotten – as one of a thousand police shootings this year -, we should put pressure on the department to release any surveillance footage that may have captured the incident. As the holiday weekend closes, let’s start the week out with a Monday morning call flood to the Cactus Park police Precinct to politely demand that they maintain the footage from 11:30am-1:30pm December 26th, 2015.