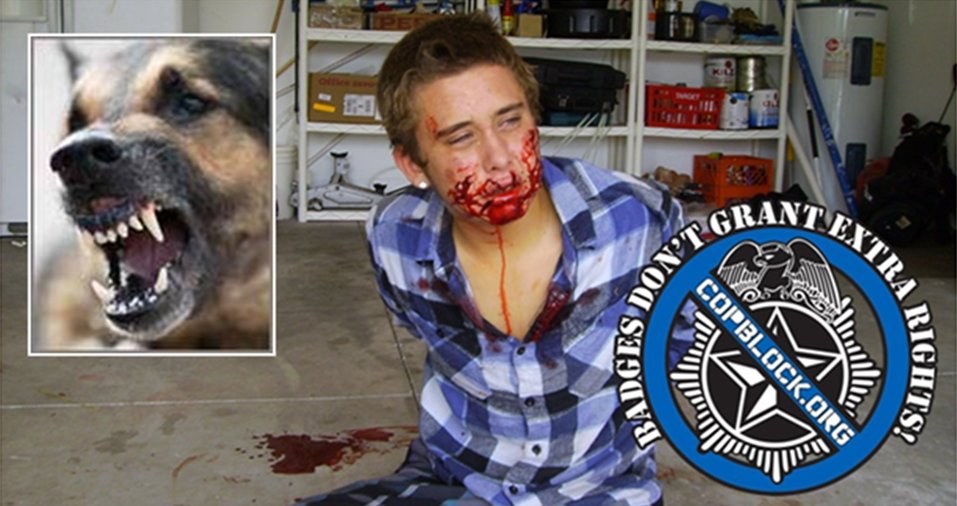 Text messages have emerged from the North Port Police Department in Florida showing a disturbing and morbid conversation between K-9 unit officers before one of the cops allowed his animal to maul an unarmed and reportedly troubled teen.

The messages, which were sent via the officers’ police cruiser mobile digital terminals, were obtained by the Sarasota Herald-Tribune as part of an 18-month investigation into the unit.

Following years of lawsuits and controversy, it was reported in July that the unit commanded their dogs to attack 34 people from 2010 to 2014 – that’s more than the K-9 units from the five neighboring municipalities combined.

Additionally, 37 percent of the apprehensions made during that period ended with an attack – a number that is higher than the traditional 30 percent threshold that many departments use as an indicator of performance and misconduct.

On July 16, 2012, the mother of 18-year-old Jared Lemay called the department to express concerns that her son may be suicidal after she reportedly found a noose hanging in her garage. Lemay was wanted for a probation violation and later said that he was depressed and considered killing himself.

K-9 unit commander Keith Bush, who has a history of numerous questionable incidents involving dog attacks of juveniles and unarmed suspects, was dispatched to the scene. Police records show that on his way, Bush sent a text message to handler Michael Dietz telling the officer to, “COME GET UR BITE.”

An additional message sent by Bush would later say, “IM GONNA TAKE UR BITE IF U DONT HURRY UP.”

Unarmed and hiding in a trash can, Lemay was found by Dietz and bitten in the face and back by the officer’s Belgian Malinois. Police photographs taken from the scene show deep puncture wounds to the young mans blood covered cheeks.

“I couldn’t even eat for a week after that because my face was so swollen,” Lemay said. “I heard a knock on the door, and I ran into the garage and jumped in the trash can. I decided to hide. That was just my instinct at the moment.”

Officer Bush wrote in reports that he pushed over the trash can after Lemay refused to follow commands to show his hands, but the teen asserts that after one officer opened the can’s lid and found him inside, he closed it and immediately pushed it over.

“I remember hitting the ground on my hands to brace myself from falling, and I looked up at them, and I went to say ‘OK, OK,’ and the guy sicced the dog on me as soon as I started to talk,” Lemay said. “I remember [the dog’s] mouth coming toward me and latching onto my face. He literally drug me out of the trash can. After the dog bit me a second time, one of the police officers put his knee in the back of my head and handcuffed me.”

“YOUR BITE OR [Dietz’s]?” McHale inquired.

“COULDA BEEN WORSE THEN, HE SHOULD HAVE COMPLIED,” McHale said, ending the conversation.

The department has refused to comment on the messages citing pending litigation in the case, but supervisors approved Dietz’s use of force following the incident. On July 21, 2014, Bush received a “memorandum of counseling,” which called the messages “unprofessional” and a violation of department policy surrounding mobile digital terminals.

A memorandum of counseling is the least severe form of discipline a North Port officer can receive, and is lower than even a written reprimand.

“E-mails and Messages sent via the [mobile digital terminal] are public record, and employees will be held accountable for the content of the messages,” the memorandum said. “This memorandum of counseling shall be characterized as a corrective rather than punitive action. Further violations will result in progressive discipline.”

The American Civil Liberties Union of Florida says the messages should have elicited a much stronger response by the department. They say the texts show clear evidence of a premeditated attack by police on Lemay.

“The ACLU considers this event to be a clear case of excessive use of force and improper use of police dogs,” legal chair Andrea Mogensen said. “It’s tantamount to a planned use of force. If you’re on the way to the scene and your information is that the subject is depressed and suicidal with no history of violence it’s really not reasonable to plan a use of force on the way there.”

Two other civil rights violation lawsuits involving North Port’s K-9 unit are currently making its way through the federal court system. Both involve Officer Bush and his dog, which has accumulated 25 bites since the start of 2012.