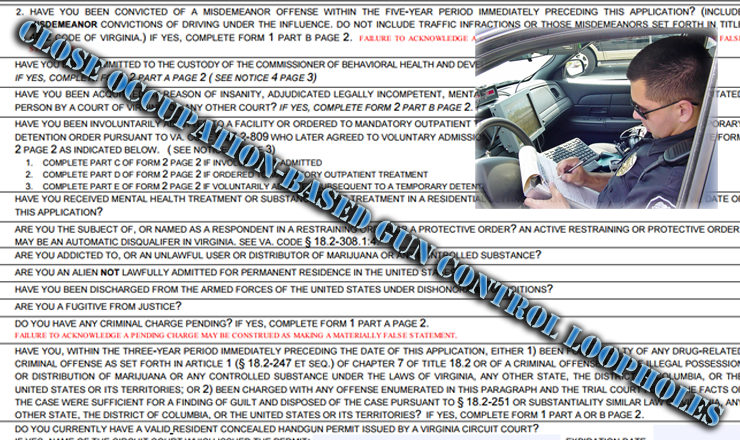 It’s clear that you want to build a legacy as gun control trailblazers in Virginia. What’s not clear is why you both seem entirely disinterested in adopting or advocating for meaningful control measures for those who are entrusted with guns and the authority to take lives with near-impunity by the government. You can be counted on to stand with the grieving families of gun homicide victims…so long as they are not the victims of police abuse and overreach. In those cases you are nowhere to be found. The hypocrisy is galling. And telling.

Furthermore, your recent move to end concealed carry permit reciprocity with 25 states targets a population that is known to be much more law-abiding than the general public, and does nothing to increase public safety. According to the Washington Post, the Attorney General’s office “could not say how many people are suspected of crossing into Virginia with concealed weapons to commit crimes.”  The fact that you cannot provide the very information that should have informed your move to restrict CHP holders in the state implies that you either did not bother to research this because you knew it was a non-issue, or you did research it and found no evidence that there was an issue.

This move against CHP (Concealed Handgun Permit) holders ensures the significant political wrath of both Virginia and non-Virginia gun owners while undermining your other gun control goals. Residents are now discouraged from applying for Virginia CHPs, which involves many common gun control features such as paying fees, taking a course, and undergoing a criminal background check. The database of CHP holders also serves as a de facto gun owner registry as all holders are registered with the state. Additionally, all CHP holders have their motor vehicle registrations flagged so that any police officer who runs their plates knows that they are a gun owner and may be carrying. You have undermined all of that to pay back political favors to an out of state puppet master (Michael Bloomberg), who was barely able to buy you a victory in the previous election (McAuliffe won by only 2.5% of the vote; Herring by only 165 votes).

You are clearly ambitious men with future political goals. Your actions while in office show you are trying to win the support and approval of law enforcement officials and unions, the same group that did not endorse either of you in the previous election. Rather than continuing to tacitly and explicitly endorse police violence and civil liberties abuses, you can take a stand that reduces both crime committed with guns and crime committed by state agents.  Here’s how.

Virginia prohibits those with a history of stalking, assault, and alcohol abuse from carrying a concealed handgun. All of these are serious issues in the law enforcement community. Law enforcement has increased rates of domestic violence with at least 40% of police officer families experiencing domestic violence. Recent incidents have highlighted that police officers behind criminal officer-involved shooting incidents and assaults often have a history of being repeat excessive force offenders. Police Chief Magazine reports that law enforcement officers drink in greater quantities and have higher rates of binge drinking compared to the general public, and that 25 percent of LEOs have admitted to consuming alcohol while on duty.

Additionally, the following list of Virginia CHP disqualifications should also apply to all persons since state and local agencies should not be arming the same people that state law dictates are othwewise unfit to carry firearms.

The federal Gun Control Act makes it unlawful for certain categories of persons to ship, transport, receive, or possess firearms. 18 USC 922(g). Transfers of firearms to any such prohibited persons are also unlawful. 18 USC 922(d).

These categories include any person:

Prohibitions on those convicted of misdemeanor domestic violence, subject to restraining orders, or using/addicted to controlled substances are especially relevant to police. In addition to higher rates of domestic violence, law enforcement officers also have a drug abuse and addiction rate double that of the general public. According to Law Enforcement Today, “it has been estimated through multiple studies that abuse and addiction among law enforcement officers runs somewhere between 20-25%.

“In addition to the normal health concerns, there is one further issue when discussing abuse of steroids by those in the law enforcement profession. Officers carry weapons, are authorized to use lethal force, and are often involved in physically controlling or restraining people. If the stories of ’roid rage are true, how often are the officers who use anabolic steroids involved in unnecessary use-of force incidents that could become a major liability for their agencies?”

Police officers who fail drug tests must be terminated to protect the public’s safety and comply with federal laws that make such officers ineligible to receive or possess state-issued firearms. Personal firearms of such officers should also be subject to confiscation just as any civilians’ would be.

2013 amendments to § 15.2-1707 of the Virginia Code significantly expanded the number of offenses that certified law enforcement officers could be decertified for. The law now requires that the Department of Criminal Justice Services Board (DCJS) decertify law enforcement and jail officers who are convicted or plead guilty/no contest not only to felony offenses and for failing a drug test (so long as the positive result cannot be explained to the agency administrator’s satisfaction) or refusing to submit to drug testing, but also Class 1 misdemeanors involving moral turpitude and sex offenses; and cases of domestic assault. Additionally, agencies are required to provide written notification for any employee who resigned or was terminated in advance of being convicted or found guilty of an offense that requires decertification, or who resigned or was terminated in advance of a pending drug screening.

To further reduce the number of law enforcement officers who remain employed or gain future employment at another agency or in another criminal justice occupation despite demonstrating unfitness for the job, the following changes should also be made [i]:

Many of these items require action from the state legislature, however, so do most gun control measures affecting the general public. Your offices have worked independently to enact policy changes in that arena through executive orders, official opinions, rule changes, and updated guidance to state agencies, and also with members of the General Assembly to propose, support, and promote new or updated legislation.  You have the opportunity and the duty to be leaders on the state and national level by championing reform in law enforcement now.