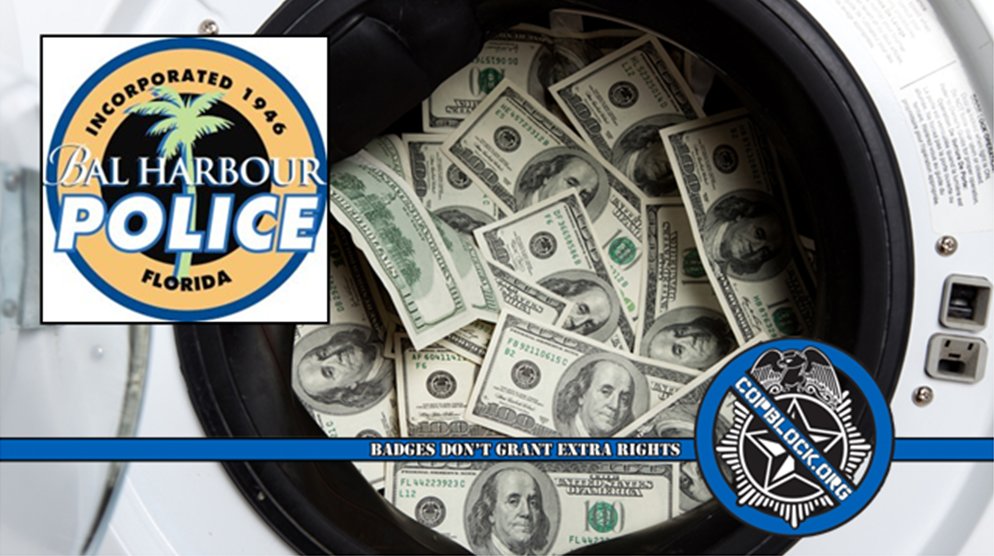 Florida cops with the Bal Harbour Police Department and Glades County Sheriff’s Office are currently under federal investigation for allegedly laundering at least $55.6 million for drug cartels and other criminal organizations under the guise of a joint task force operation that allowed them to make $2.4 million for themselves.

According to an investigation by the Miami Herald, which examined hundreds of confidential records of the task force, including emails, bank records and passports; at least 20 people from the South American country of Venezuela received funds while getting a cut to wash the money – some that were even associated with the Chávez and Maduro regimes.

The Tri-County Task Force traveled across the country on dozens of first-class and business flights while frequently staying at luxury hotels in an operation that was meant to “disrupt criminal groups,” records show. Officers withdrew hundreds of thousands in cash while making no records or account of what the money went to.

From 2010 through 2012, the 12-member task force struck deals with the drug organizations and charged them tens of thousands of dollars in commissions each month while spending tens of thousands more on things like expensive weaponry and electronics.

“They were like bank robbers with badges,” attorney and former DEA agent, Dennis Fitzgerald said. “It had no law enforcement objective. The objective was to make money.”

The task force caught the eye of the Justice Dept. three years ago after an investigation found Bal Harbour cops misspent money from seizing cars and cash to pay for officers’ salaries. This led to the resignation of Police Chief Tom Hunker in 2013.

Latter, the Miami Herald found that the cops spent far more money during the undercover “sting” operation from a pool of funds that was never examined by federal investigators, and Bal Harbour ordered an audit of undercover accounts at SunTrust Bank that were used to deposit and send cash.

According to documents, officers would travel to New York to pick up drug money, and were directed by brokers to wire it to Venezuelan banks inside Panama. They did this on numerous occasions and continued to funnel money out of the country to be washed and brought back in.

Some of the more interesting recipients of the funds included Willam Amaro, a 48-year-old assistant to current Venezuelan President Nicolás Maduro. Long considered a trusted adviser to the president, Amaro met Maduro when they were union workers in the 1990s.

During those years, they both joined the revolutionary socialist movement that was sweeping the nation under Hugo Chávez. Maduro would latter befriend Chavez and work as a Foreign Minister and Vice President in his regime. He was elected President in 2013. Records show that the Florida cops wired money to Amaro’s account four times, depositing $211,000 in all.

Other high profile recipients of money include Rodolfo Rashid Velasco, who was sent more than $100,000. He was tied to one of the largest drug cartels in the hemisphere and the cops never alerted federal investigators before sending the funds, nor did they open an official investigation in his case.

Noted Venezuelan crime figure David Habib Hannaoui also received $212,000 in 2010. Both he and Velasco were eventually arrested in Venezuela on money laundering and other criminal charges.

In their largest case, officers sent a total of $2.5 million to Fabian and Jonathan Cedeno but never launched an investigation against them. The cops maintain that they were merely fighting crime in attempt to set up launderers, but the absence of cases actually pursued against perpetrators lends little credibility to that clam.

In addition, former chief inspector of the DEA Felix Jimenez said that the officers violated strict federal bans on sending illegal money overseas, which can only be initiated by the Justice Dept..

“They had no authority to do what they were doing,” Jimenez said. “They should have known better. Who gave them the authority? It’s absurd. They were just laundering money for the sake of laundering money.”

Federal agents for the U.S. attorney’s office in Chicago are currently investigating the task force and have offered no comments about the Herald’s revelations, or their progress on the case.