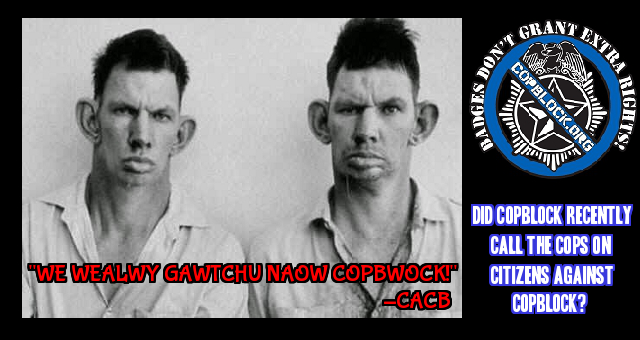 Recently a member of the Keyboard Warriors of CopBlock shared a screenshot depicting a conversation from Civilians Against CopBlock (CACB) – a Facebook Page dedicated to exposing the lies here – in which they [the admins of CACB] were instigating one of their followers to break the law by hacking into our website. You can view that screenshot image HERE.

In response, I thought it would be fun to turn the tables on them and report the potential crime. CACB and their followers make a great show of telling us how much respect they have for the law and those who enforce it. So their collusion to break laws right out in the open public sort of negate all of that bullshit lip service they pay to police and the law. In fact, I think that in such severe cases of Copsuckery, the individual only views the police as a necessity because they themselves are so full of dark, violent, criminal impulses that they imagine that is how we all are. The very worst people in society are often the very same people who support police fanatically and blindly, for a number of psychologically twisted reasons. I think some of them also think that it makes them safer from cops, but that is ridiculous. Not one killer cop has ever asked his victim their opinion on policing. In any case, I found the threat of cyber crimes too delicious and illustrative of CACB’s true nature too delicious to pass up.

So I informed the Tallahassee Police Department, which is where the would-be criminal Clayton Johnson lives, of his threats via a message sent to their Facebook page. I did not expect them to actually respond or investigate a crime or do anything at all. I just wanted to have a record in case their crime was committed so that I could show that police do not provide their service equally, even when they insist on us paying equally for it. I have not heard anything back and the site has not yet been hacked in any noticeable way.

After I did that, I wanted to inform CACB that I had done so, and that their conspiracy to commit a criminal act had not gone unnoticed. Unfortunately the cowards at CACB have banned me and anyone else who might poke holes in their moronic redneck bumpkin ideas. So I was left with no way to reach them except for to use the CopBlock Facebook page account, which they keep around so they can tag us and get more views and generally ride our coattails, which I used to leave a comment in a link on their wall describing my activity. I did not personally sign it as the current user, as I should have. This has led to my actions being blamed on CopBlock itself, which is not the case. In pointing out the criminality of these dastardly thugs to themselves, I take full responsibility, as well as in making the decision to contact police and acting on it. Nobody else even contributed to or suggested any route of the course I personally decided to take. The incident now being repeated ad nauseum by CACB shadow trolls was not an act of CopBlock.org but of I, Joshua Scott Hotchkin, alone.

Yet even if I had actually called the cops to seriously report the potential crime, rather than Facebook message it to them for irony, fun and record-keeping purposes, I would be well within my rights to do so. If you were forced to pay for a pizza that you didn’t want, and you complained about this situation, you would still have a right to eat some of that pizza. By having forced you to pay for it, the pizza pushers are now in debt to you and must provide their services, and you have every right to insist on them even if you don’t like them. The same is true of police. I do not want police. Yet still I am forced to pay for their services. Still I am forced to receive their services. Still I am forced to live in a world in which the consequences of their product have fucked a lot of shit up. So if I want cops to investigate crimes against me, I have every fucking right to do so. You are either an idiot, hypocrite or immoral jackass if you believe otherwise.

But despite the fact that I didn’t really ‘call the cops’ on them and would have been alright doing so if I had, I really don’t use police services. Not just because I don’t want them, but because I do not need them. Despite the scared child lying frozen under the covers scared of the monsters below the bed and in their closet mentality of CACB and the Copsucker contingent, cops are rarely necessary and often make a bad situation worse for everyone involved.

CACB members and followers are the mongoloids responsible for littering our social media comment threads over the past several days with these accusations, and they seem to think they caught us in some kind of trap. They could not be more wrong. These simple-headed morons simply latch onto one idiotic idea at a time and then try to resell it to as many other equally stupid people as they possibly can. And it works. There are lots of stupid people. They can do this for years and never run out of idiots to feed their idiocy to. Yet the way they strut around you would think they had just won the NASCAR equivalent of the Super Bowl of debate. Just so you dumbfucks know, you didn’t win shit. You manage to pied piper around a bunch of equally immoral and stupid hillbillies like yourself, but nobody on this planet with any intellectual capacity takes you dipshits seriously. So have fun leading your little troglodyte parade around like you won the internet while the rest of us peek through the window and laugh at you.

Read an earlier response to similar accusations here:
I BET YOU CALL THE COPS AS SOON AS ANYTHING GOES WRONG