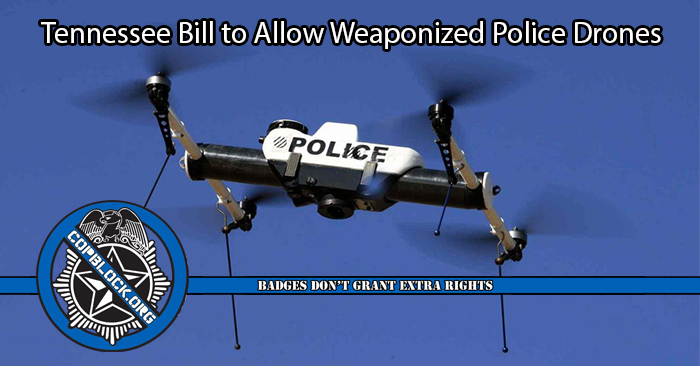 A new bill has been introduced in the state of Tennessee that would make it illegal for citizens to possess weaponized drones. On the surface, this probably seems like a good idea and a common-sense measure to take. However, it is the language of the law that many find concerning.

If enacted, the new law would make it a class E felony to be in possession of weaponized-drones, leaving all state-wide police departments exempt.

Of course, Tennessee wouldn’t be the only state to allow police departments to possess weaponized drones.

Last year, North Dakota became the first state to allow police departments to use weaponized drones as long as the weapons used are considered “less than lethal.” A major issue with “less than lethal” weapons used by law-enforcement is that although beanbags, tasers, rubber bullets, and tear gas are categorized as non-lethal, they still have the potential to inflict lethal harm.

In a state that welcomed with open arms all of the military grade weapons and vehicles that the Department of Defense 1033 program provided, it wouldn’t be a stretch to conclude that one day Tennessee police departments would use their exemption in the law and weaponize drones for policing like North Dakota.

The newly introduced bill in Tennessee makes no mention of limiting law-enforcment to “less than lethal” weapons on unmanned aircraft.

If the bill is passed, it will take effect July 1st.