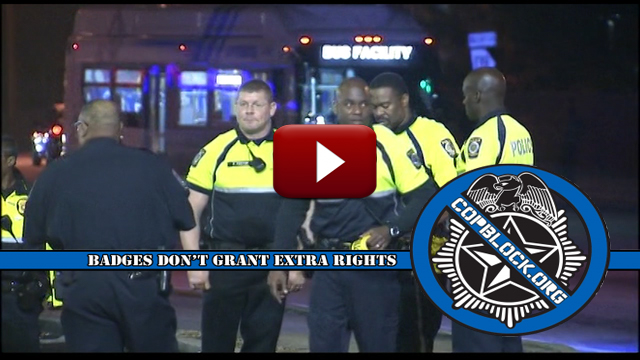 On 12.11.12 – Local Atlanta community activist Sir Maejor films local transit cops because he knows all too well the police misconduct that goes on in their agency. As he saw a group of MARTA thug cops walking swiftly to a nearby store, he decides to standby and watch in case something goes wrong. MARTA’s biggest bully Lt. Willie Davenport walks up to him and threatens him “there was a robbery that just took place if I find out you are apart of it or if you obstruct in any way I will have you arrested”, that prompted Sir Maejor to start filming for his protection because he has had past dealings with Davenport who previously engineered bogus felony charges on him, which he’s currently fighting.

While filming Sir Maejor speaks to a few of the citizens in the area and shoppers who just exited the store, only to find out NO ROBBERY had taken place and that MARTA Police’s Habitual Liar Lt. Willie Davenport was telling another lie.

After wrapping up filming that encounter, Sir Maejor continued to film to document the area and the officers. While filming, A K9 Officer walks by and calls me a “wannabe cop” I asked him who was he speaking to and he replied “Y-O-U” and said I don’t have any respectful the law. So since when is filming police a violation of the law or how does it show lack of respect for law enforcement?

Sir Maejor continued to film this officer, next Lt. Davenport walks directly behind Sir Maejor violating his personal space. Sir Maejor conducted himself in a respectable manner without allowing the offices to provoke him and get a rise out of him as that’s what they’re whole intentions was. Lt Willie Davenport walks across the street directly towards Sir Maejor and taunts him by saying “come walk with me down here, walk with me down here” as if he was about to set me up again like he did with the bogus felony charges.

Sir Maejor was smart enough not to engage with this bully cop. He goes back into the Express Pharmacy where he was to talk to the security guard friend. Moments later comes MARTA Police Lt. Willie Davenport harassing Sir Maejor, he gets on the phone and calls Atlanta Police and says yes I need you guys, I got one male interfering with law enforcement, I am in the pharmacy. At that time the security guard advised Sir Maejor not to film in the store and to just head home, but Sir Maejor is no fool to turn off the camera. He took the train home but took the long route home instead of taking the nearest train out of fear of more police harassment. He makes a stop at train station to advise MARTA Police what had took place and asked for Lt. Willie Davenport’s supervisor.

Marta police has absolutely no police accountability and or transparency a formal complaint will be filed, but we highly doubt this officer will be sanctioned, as none of their officers ever get sanctioned for misconduct. Always Film The police, even if they appear to be friendly.

is a Atlanta- based community activist/ advocate and the Senior Justice Writer for Cop Block Atlanta. Sir Maejor works in entertainment industry and in the criminal justice system. He isn't just one of those faces who sits around and hope for a change to come, but yet he's one who rolls up his sleeve and starts getting involved to make a difference.