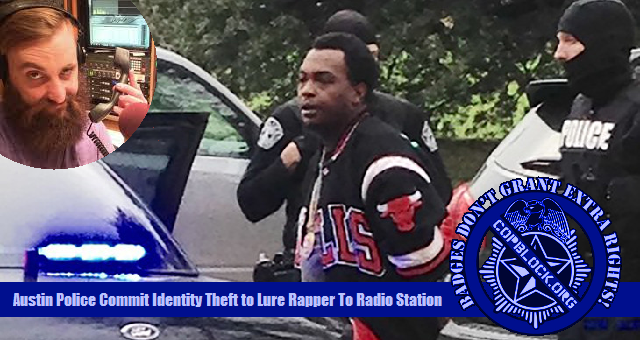 The following story was presented by CJ Morgan from the Austin rock radio station KLBJ.

What the actual fuck?

Several listeners contacted me on social media today (okay, one) inquiring why so many officers were in our parking lot. According to our sister station, NewsRadio KLBJ:

“Federal warrants for an aspiring Austin rapper lead to Austin police setting up a sting and successful arrest.

Shasirae Harvey, 33, who goes by the name of 24 Razorback was arrested for evading arrest with previous convication, possession of controlled substance with intent to deliver; unlawful possession of firearm by felon and possession of marijuana. Austin Police lured Harvey to our radio station under the pretense of an interview.”

That’s right. The APD [allegedly] lured a rapper to the station with the promise of listening to his demo tape. They used us as bait. I have a few thoughts on this matter:

(a) We play Led Zeppelin, AC/DC and Pink Floyd.

(b) It’s completely reckless for the detectives to [allegedly] have used KLBJ 93.7 and our actual address as bait. People are idiots and will assume we had something to do with this. Over the last few years, our station – specifically – and personalities have dealt with numerous threats from a variety of people online, at our offices, events and up-close in-person.

To fuel this flame is kind of insulting and irresponsible (literally had a nut bag here last week pounding on the glass and a dude that came inside our studios the week before).

So now I have to worry about some bro punching me at a event because he didn’t like getting his feelings on Facebook, the marauding purse snatching hobos who constantly flock around our tailgates to drink free beer and take all the BBQ… fight with female bartenders when they are cut off and get aggressive when confronted about stolen materials, the angry drunks who get mad over our playlist, the schizophrenics who think the radio is talking to them and now – thanks to APD, who did this without our knowledge or consent – a rapper and his posse.

(c) What happened to the demo tape?

If you or I were to falsely represent ourselves as someone that we were not in order to lure a person into a trap, we would face identity theft charges and perhaps even far more serious crimes. The Austin PD has no problem whatsoever committing this sort of act of aggression just to catch a man whose ‘crimes’ involved no victims at all.

However, a victim was created as a result of that arrest. As the DJ illustrates above, the immoral, illegal and unethical actions of the police will undoubtedly become a liability for the radio station and its employees. Police have no regard for how their actions affect the innocent people and businesses around them and will step on whoever is in their path in their neurotic frenzy to milk the populace of its resources and redistribute them to itself.

I am having trouble picking today’s metaphor for police. Parasites? Cancer? Vultures?

I think I will just stick with ‘criminals’ for the time being.