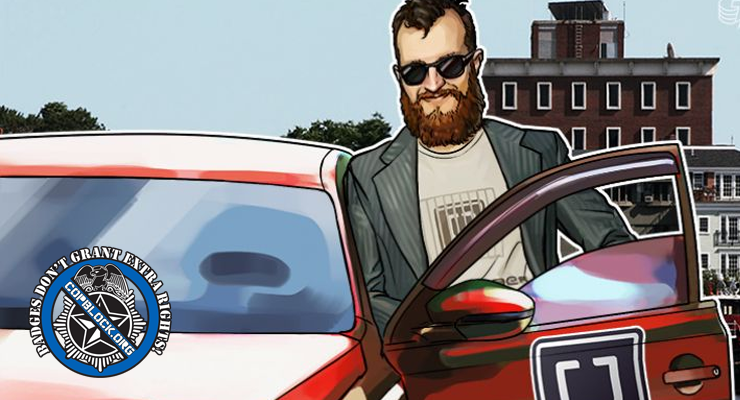 Free UBER‘s Christopher David is making headlines again for his latest announcement where he and several other drivers are offering free rides to people on New Year’s Eve in Portsmouth, NH. The drivers are accepting tips, and Portsmouth police chief Frank Warchol said in an interview with the Portsmouth Herald that accepting donations would still place them under government control and means they’d be fined if caught operating without government permission slips.

Chris’ announcement has really put the government gang in a ridiculous spot that shows their true nature. Prior to this, the controversy with UBER in Portsmouth has been that UBER’s background check requirements aren’t as stringent as Portsmouth’s ordinances demand. There’s been endless debate and discussion in city council meetings about who should be allowed to drive other consenting adults from place to place, with the town government agents acting concerned about “protecting” the passengers from potentially criminal drivers. However, no one in the Portsmouth government would care if a felon takes someone from point A to point B for free, but if they accept a dollar for their effort, then the regulations apply! What’s this scheme of theirs really about? Perhaps money, control, and protecting the old cab companies from competition?

The Portsmouth gang is threatening the charity drivers with fines of $500 to $1,000 if they are caught accepting money for rides. How police will catch them is another question entirely. With UBER, police could use the UBER app to monitor the locations of the UBER cars (whether they have, I don’t know). However, UBER is not involved at all with the New Year’s Eve charity, so police would have to run a sting operation by scheduling a ride, then pouncing on the driver when he or she accepts a tip from the undercover cop.

Chris says that his reading of the Portsmouth gang’s “ordinances” and the state gang’s “statutes” lead him to believe there are virtually no restrictions on limousines. The Portsmouth transportation ordinance defines limousine services as those which, “provide designated luxury or specialty vehicles by prior appointment for discrete functions or transportation to locations outside the City or the reverse”. Chris says the vehicles on New Years Eve will be specialty because they will have fun games in the passenger seats.

Will anything go down on New Year’s Eve between city cops and the charity drivers? Stay tuned to Free Keene for the latest, and if you’re looking for a ride on New Year’s Eve in Portsmouth, sign up for yours here at Chris’ new project, Arcade City!