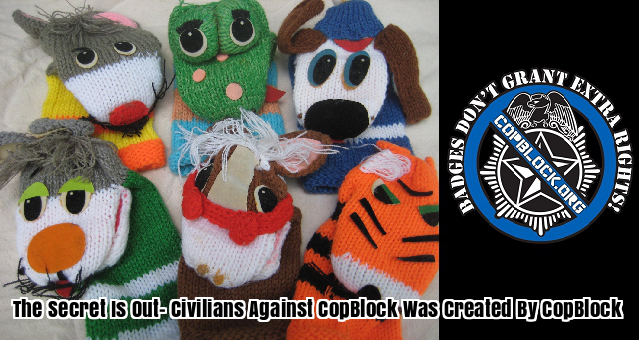 We had planned to break this news early sometime in 2016, but after our recent coverage of the events originating at CACB, we have decided to let the cat out of the bag.

Citizens Against CopBlock was a farce dreamed up by Ademo awhile back as a way to discredit copsuckers by getting them to attach themselves to opinions and statements that were so ridiculous it would make blind police supporters all look like complete morons by association. It was also thought that we could get the most disgusting, immoral and unscrupulous folks to publicly oust themselves by doing so. Finally, he thought it would be fun to see what happened when an organization like ours manufactured its resistance. In all of these things the efforts of the admins that we got to run CACB have been wildly successful.

Most all of us have at one time or another played a character on that page, or done time as an admin. It is an incredible challenge to create and execute a character so contrary to ones self, but it is also a lot of fun. My role as the admin ‘Jay’ has been almost as rewarding as actually writing for CopBlock.org itself.

This is the actual reason why CACB admins are all anonymous. If they had revealed their actual identities we could never have pulled off the gag, even if we just let the hired outsiders run the whole shebang. It is also why CACB blocks so many of our contributors and supporters. We needed to make that seem like a safe place for rabid police supporters to openly share their horrifying worldviews, which they would not have done had the place been overrun with people more intelligent and well-informed than them. Everything that CACB does has been done to help us create the illusion of a safe place for copsuckers, while the entire time we have been leading them along to oust them for their ignorance and immorality.

Of course, we don’t plan to give up the gig just yet. We have informed all of the admins that under no circumstances are they to reveal the truth to anyone, and have been instructed to continue the charade and deny any claims that they are not what they appear to be. The kind of people who show up to support that page and its patently asinine ideas are not smart enough to quit just because we told them we were just fucking with them. In fact, we predict that they will double-down and become more convinced of the righteousness of themselves and CACB in response to this. That it is so easy to predict their thoughts and behaviors has made this experiment so much fun and such a grand success.

So don’t expect CACB to go anywhere any time soon. It may be fake, but the stupidity that drives people to follow that group and its hyperbolistic manufactured worldview is very real. We can rely on it to drive more people straight into our trap for a very long time, even though we are telling them right up front that it is fake. Such is the beauty of fucking with the minds of morons.

So from all of us at CopBlock.org, we would like to thank all of the CACB folks who have worked so tirelessly to help us spread our message by pretending to oppose it. What, you thought they kept driving traffic to our site because they were actually against us? Yeah, that’s cute. Keep believing stupid stuff. It puts you right where we want you, as unwitting agents helping us to spread the message that Badges Don’t Grant Extra Rights. And I would be careful if I were you, because it may not be the only counter-resistance project that we are actually in control of. In fact, I know its not, but we can’t give away all of our secrets at once.