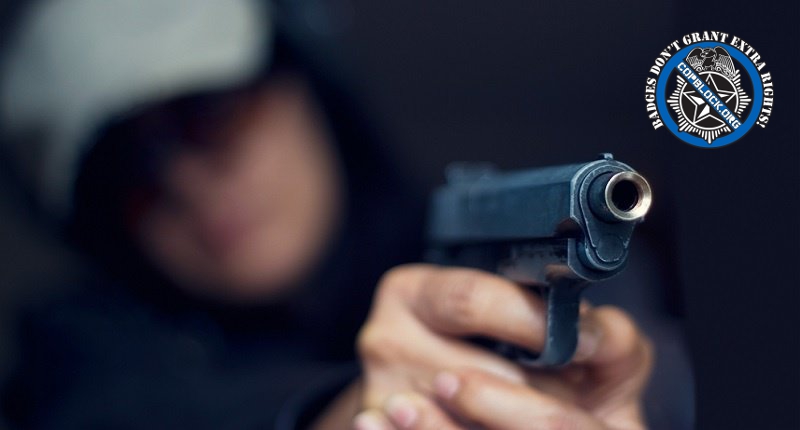 Just before midnight on Christmas, an unnamed female LVMPD corrections officer and her husband (who obviously hasn’t been named either, but is reportedly a police cadet) fired 27 shots combined at a female relative who lived in the same house as them. Apparently, they weren’t expecting her to come home at that time and rather than take any chances or pause for a second to make sure it wasn’t the other person that lived in the same house as them, they came rolling out guns blazing.

Probably the most amazing thing about this is that they only managed to hit her once in the leg, even though they fired slightly less bullets than the Sioux fired at General Custer. Of course, the thing that is not at all amazing is that the North Las Vegas police (where the house is located) have announced that neither of them will be facing any sort of charges, nor is the Las Vegas Metropolitan Police Department interested in even investigating the incident.

When officers arrived at the scene, they learned what transpired to cause two Metro employees — a man and woman — to fire their weapons at what they believed was a burglar.

However, the person shot was a relative who lives with them.  The relative wasn’t expected home that night.  Investigators say the relative was hospitalized with non-life threatening injuries.

None of the people involved in the incident have been identified.  However, 8 News NOW has learned one of Metro employees (sic) is a corrections officer. Metro Police says it doesn’t know of any policy violations that would warrant an investigation.  There is a policy regarding the accidental discharge of a firearm, but that doesn’t apply in the recent situation.

Under Metro’s policy, an accidental discharge would require an investigation by the Force Investigation Team, but that’s in cases where a gun goes off while an officer is cleaning it or after a gun fires when the officer may have been pointing it, and didn’t mean to pull the trigger.

In the North Las Vegas case, the Metro employees did intend to fire their guns because they thought the person they were shooting at was an intruder.

However, the incident isn’t considered an officer-involved shooting because the Metro employees weren’t on duty, and they weren’t acting in the capacity of police officers.

That is why North Las Vegas Police are investigating it as a situation in which the homeowners thought they were dealing with what they perceived was a threat in their own home.

Police in North Las Vegas are still investigating, but at this point 8 News NOW has been told, there’s nothing that leads them to pursue criminal charges.

I have some real doubts that if someone who didn’t have a magical uniform hanging in their closet unloaded a couple dozen bullets at their roommate because they arrived home early, whether Metro or the NLV police would just write it off as a wacky little faux pas. In fact, call me crazy, but maybe somebody who would do that isn’t someone that should be running around pointing guns at people on a regular basis.

Truth be told, I have /.[plenty of doubts about this whole story from the get go. Knowing someone else lives at the house, who wouldn’t check to see if that was who had come through the door before shooting enough rounds to kill half the neighborhood? Why wouldn’t that person say something after the shooting started? I mean it’s a given that a good percentage of the LVMPD are trigger happy maniacs who will shoot people at the drop of a hat, but this is a relative that lives with you and “had access to the house,” which implies they didn’t have to break in. At this point, it’s purely speculation, but I would not be at all surprised if something more than the current official story comes out in the future.