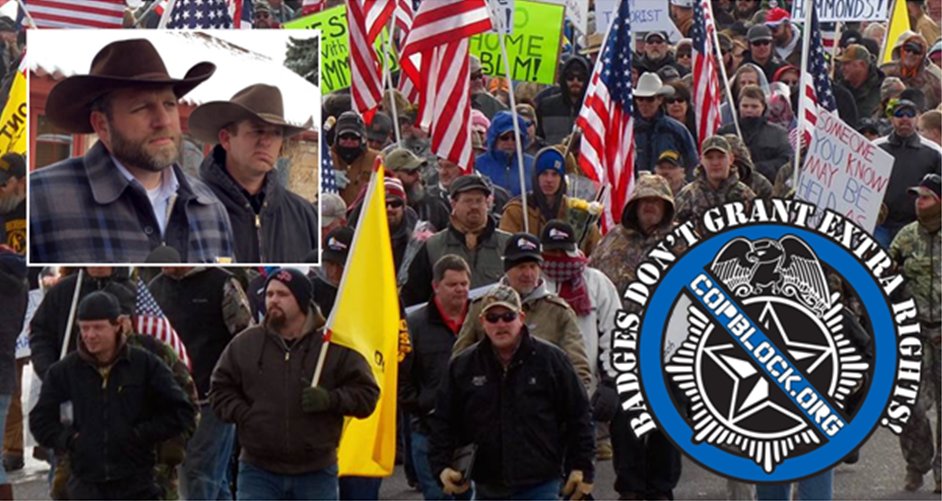 As armed Americans take a stand against a tyrannical federal government near Burns, Oregon, the timid amongst the right and the totalitarian amongst the left offer a resounding chorus: Nothing good can come of this.

I disagree. If nothing else, the armed occupation of the Malheur National Wildlife Refuge headquarters by the Bundy led militia serves as a much needed symbol for the silent majority of the nation – a silent majority that is fed up with the encroachment on our liberties. Symbols are important, and it only takes a spark to start a prairie fire.

Coincidentally, that’s just what 73-year-old Dwight Lincoln Hammond Jr. and his son, 46-year-old Steven Dwight Hammond did – start fires. The men said they started a series of range fires on their own private property – first in 2001 to burn off an invasive species, and then in 2006 to protect their land and feed crops from fires already ignited by lightening – a tactic known as “back burning.”

The fires spread onto public land controlled by the Federal Bureau of Land Management (BLM) and the ranchers were prosecuted in 2012 as part of a plea arrangement on an array of charges including conspiracy, arson under federal terrorism acts, and attempting to damage property through fire. They were also made to pay $400,000.

As part of their plea deal, the Hammond’s agreed not to appeal their sentences. Dwight was sentenced to three months in prison and Steven was sentenced to 11 months – far below the mandatory minimum of five years their charges demanded – which judge Michael Hogan called “grossly disproportionate” and a “shock [to] his conscience.”

Unfortunately for the ranchers, the feds did challenge the sentencing getting the Ninth Circuit Court of Appeals involved in order to overturn Hogan’s decision and send the men back to prison to serve the entire five year term. They are scheduled to report to the federal Terminal Island prison in San Pedro, California today.

Unbeknownst to most Americans, the federal government claims ownership of nearly 650 million acres of land in the country – almost 30 percent of the nation’s land mass. This type of land monopolization by government, which is sold to the populace as being “the people’s land” or “common property,” is nothing less than communism and has many detrimental affects. First and foremost, its important to understand that the government is not the people.

It is a separate entity than us. We are not them. We need only to look at the example of the Hammonds to see the reality of this in action, but economist and political theorist Dr. Murray N. Rothbard exemplified this fact perfectly in his essay, Anatomy of the State:

…With the rise of democracy, the identification of the State with society has been redoubled, until it is common to hear sentiments expressed which violate virtually every tenet of reason and common sense such as, “we are the government.” The useful collective term “we” has enabled an ideological camouflage to be thrown over the reality of political life. If “we are the government,” then anything a government does to an individual is not only just and untyrannical but also “voluntary” on the part of the individual concerned. If the government has incurred a huge public debt which must be paid by taxing one group for the benefit of another, this reality of burden is obscured by saying that “we owe it to ourselves”; if the government conscripts a man, or throws him into jail for dissident opinion, then he is “doing it to himself” and, therefore, nothing untoward has occurred. Under this reasoning, any Jews murdered by the Nazi government were not murdered; instead, they must have “committed suicide,” since they were the government (which was democratically chosen), and, therefore, anything the government did to them was voluntary on their part. One would not think it necessary to belabor this point, and yet the overwhelming bulk of the people hold this fallacy to a greater or lesser degree.

Primarily, the government “ownership” of vast amounts of land has harmful economic affects on the very people the land is supposedly being maintained for: the people. It’s basic supply and demand. If 30 percent of all land is being kept off the market by the feds, just what to you suppose is going to happen to property prices? They are going to be much higher than they would otherwise be.

This is the primary qualm the Bundy led militia in Oregon has with the present situation surrounding the Hammond case. Not only did the feds essentially railroad the ranchers by overturning their sentencing, the case appears to be just another ploy by the government to continue its illegitimate land grabbing from ranchers.

According to Tri-State Livestock News, former BLM range technician, watershed specialist and Oregon rancher Erin Maupin said backfires set by other ranchers had burned federal lands in the past, but only the Hammonds have been charged, arrested and sentenced.

Maupin said ranchers “would call and the BLM would go and help put [fires] out and it was not a big deal,” but that there were numerous instances of BLM fires spreading onto private land causing ranchers to lose significant numbers of cattle, resources, and other property. Maupin claims she is unaware of the BLM ever compensating ranchers for the destruction.

Just as it was claimed, under the auspices of environmental protection, that Sen. Harry Reid wanted Nevada rancher Cliven Bundy off his Clark County ranch in 2014 in order to aid a Chinese solar power firm his son represents build a solar energy complex, corruption also seems to be afoot in Oregon.

As part of a 2000 deal to prevent the government from designating Steens Mountain as a federal monument, area ranchers traded in their BLM permits and private property for land on the valley floor, which allowed Congress to create a 170,000 acre wilderness with 100,000 acres being deemed “cow-free.”

After the Hammonds are displaced from their property, the feds will be free to fully exploit the natural resource rich area in Harney County. According to the U.S. Geological Survey, the land has a high potential for silver, gold, copper, mercury, uranium and other valuable commodities like natural gas and oil.

“It’s become more and more obvious over the years that the BLM and the wildlife refuge want that ranch,” area rancher and retired U.S. Forest Service employee Rusty Inglis said. “It would tie in with what they [already] have.”

This is the kind of corruption the Ammon and Ryan Bundy led militia group is standing up against in Oregon. Despite this, the brothers have been mercilessly condemned by the left, the mainstream media, and the GOP establishment – with even Sen. Ted Cruz asking them to stand down.

There have been calls to “mow [the men] down.” Popular media personalities like Montel Williams have even called for “the massive use of deadly force in Oregon to take out Ammon Bundy,” and labeled the ranchers as “treasonous terrorist thugs,” that need to be “disemboweled” in a now deleted Facebook post.

As for the Hammond family, they have made it clear that they don’t want the support of the Bundys and wish to quietly turn themselves in. If the Hammonds wish to submit to being slaves to the federal government without resistance, that’s their decision. It is also the decision of the Bundys however, to stand by their convictions and take up what cause they wish.

“The end goal here is that we are here to restore the rights to the people here so that they can use the land and resources. All of them.” Ryan Bundy said. “We’re planning on staying here for years, absolutely. This is not a decision we’ve made at the last minute.

For the most part, local cops and federal law enforcement agencies have kept their distance but as history has taught us in cases like Waco and Ruby Ridge, that likely wont last for long. The FBI has now reportedly taken charge of the law enforcement response to the situation and is working with the Harney County Sheriff’s Office, the Oregon State Police, and other local and state agencies.

“Due to safety considerations for both those inside the refuge, as well as the law enforcement officers involved, we will not be releasing any specifics with regards to the law enforcement response,” the FBI said in a statement. They maintain they are looking for “a peaceful resolution to the situation.”

Ammon Bundy said at a press conference Monday that officials have sent messages to the occupiers inside the refuge saying that authorities do not intend to approach the group – which have now taken the name of “Citizens for Constitutional Freedom.” He also maintained that he did not believe officials would try to forcibly remove the protesters.

The situation has interesting similarities with a historical incident in Ireland called the Easter Uprising. During the week of Easter in 1916, Irish Republicans mounted a revolt to end British rule and establish an independent Republic.

Starting out with only several hundred members of the Irish Volunteers, the Irish Citizen Army and Cumann na mBan, the rebels seized key locations in Dublin. After gaining the support of around 1600 fighters, the uprising was quickly suppressed by the British army, and most of the leaders were executed.

As I said before however, it only takes a spark, and the rebellion succeeded in changing the political landscape in Ireland. In December 1918, the Irish Republican Sinn Féin party won 73 seats out of 105 in the General Election before forming a breakaway government and declaring independence from the United Kingdom.

Following the Irish War of Independence and the subsequent Anglo-Irish Treaty, Ireland effectively gained independence as the Irish Free State in 1922 with Northern Ireland exercising an option called the Ulster Month to remain in the United Kingdom. Latter, the nation became a republic, with an elected president, under the constitution of 1937.

Remember, it only takes a spark… Now listen to some words of encouragement from Florida Libertarian Senatorial candidate Augustus Sol Invictus: