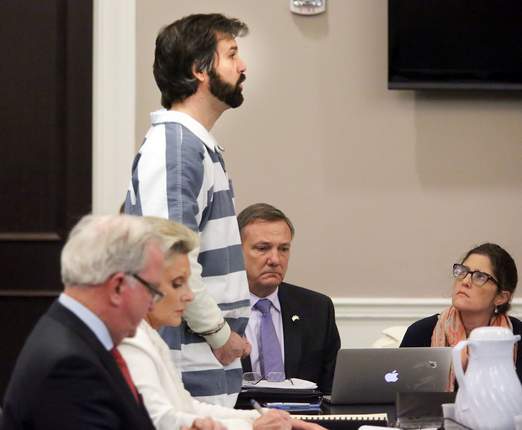 Michael Slager, the former South Carolina police officer who was caught on video shooting Walter Scott in the back, was released on $500,000 bond early Monday. According to USA TODAY:

Slager, 34, had been jailed in isolation for more than eight months since his arrest, The (Charleston) Post and Courier reported last month. His defense team in December asked Circuit Judge Clifton Newman to set his trial for the spring.

But prosecutor Scarlett Wilson is also prosecuting the case of Dylann Roof, the white suspect in the killings of nine black parishioners at a Charleston church — that trial is slated to take place in July. Wilson said a state Supreme Court order prevents her from trying other cases before that one. She had asked for a November trial date for Slager.

His attorneys asked the judge to free him, saying he would otherwise face 11 more months of incarceration, The Post and Courier reported.

Wilson opposed the release, saying there had been no change in circumstances to warrant it. “We believe the defendant remains, as the court found, a danger to the community and a flight risk,” she said.

Walter Scott, the father of the slain man, also addressed the judge, saying he often goes to the cemetery to visit his son’s flower-bedecked grave.

“If we let him out, he’s going to go home to see his wife and children. All I can look at is a pot of flowers,” Scott said.

The last quote is the key factor for me. Courts are supposed to seek justice for the victims and the victims in this case didn’t want Slager released. The judge didn’t seem to care and took the first opportunity provided to set a reachable bail for Slager. This proves, IMO, that the system is not about seeking justice and merely an act that dupes people into believing such a system exists when it doesn’t.

The judge stated that Slager would be behind bars for another 11 months awaiting trial, thus adjusting his bail. Yet, he’ll spend the rest of his life there if convicted, so why is the amount of jail time a factor? Add that to the fact that Slager has some damning evidence against him. A conviction seems like a forgone conclusion and that “any person” would be a huge flight risk under such circumstances. Let alone someone who was caught as close to ‘red handed’ as you can get.

I understand that the system allows people to get bail, I’ve been bailed, but do a Google search for “murderers who’ve made bail”, “suspected murderer posts bond” and “murderer released on bail” and see what shows up. Aside from police officers, like Tensing and Van Dyke, there are just a few rarities that show up, but nothing that compares to the killer cops (and one of those guys, who made bail, was arrested for attempted murder again within a week). Naturally the most common result is bail denied or so high that the person can’t bail out. The only exceptions seem to be if a mistake in the system was made or you are (or were) a cop.

Wait, what are we bitching about? Slager did 8 months, which is 8 months more than most cops who murder. We should be happy and scream how the system works right!?!? Let us know your thoughts below. Do you think Slager should be let out of jail?