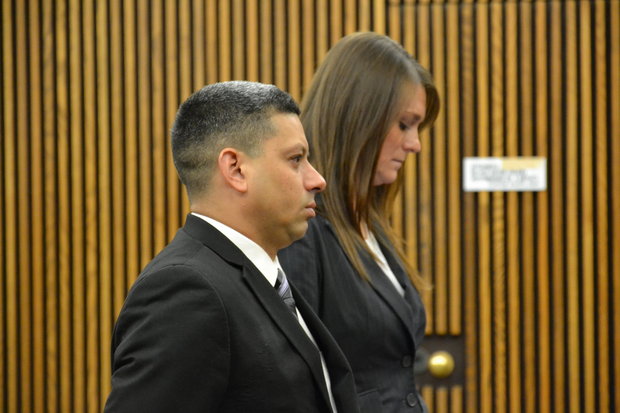 Amid the acquittal of Cleveland police officer Micheal Brelo for emptying two clips into two unarmed people, who were guilty of nothing, and the non indictment of Tamir Rices’ murderer, Timothy Loehmann. Cleveland has managed to get at least one scumbag cop off the streets, even though it has taken three trials to do so.

Elvin Sanchez plead guilty to what would amount to a felony for you or I. But thanks to the generosity of a Cleveland judge, Sanchez will be spared a felony conviction.

Common Pleas Judge Nancy Fuerst spared Elvin Sanchez jail time, but ordered him to register as a sex offender for 15 years after he pleaded guilty to sexual imposition, attempted importuning and possession of criminal tools, according to Cuyahoga County Prosecutor’s Office.

Fuerst sentenced Sanchez to two years of probation. The officer then resigned from his position as a patrolman in the city’s First District, police spokeswoman Sgt. Jennifer Ciaccia said.

The charges stem from a relationship Sanchez had with a 14-year-old girl while he worked off-duty at a private West Park high school in 2014, according to prosecutors.

What would amount to felony charges for anyone else, results in misdemeanor charges for those in Cleveland wearing a badge.  Did I mention this is not Sanchez’s first conviction? Or his last case? He was convicted of misdemeanor theft in Parma court in 2003. He played on the court’s emotion in that case as well saying…

“I was going threw [sic] a really bad divorce and we had a child involed [sic] that I couldn’t see or be with,” Sanchez wrote. “It was my first time ever doing the wrong thing. I truly learn from my mistakes. All I am doing is looking towards my future with my family and forward [sic] being a police officer this has been a life long dream since I can remember.”

I’m sure it worked wonders on the already sympathetic court. Unfortunately, this is not the end of the story. Mr Sanchez has charges pending in Parma court AGAIN!  Charges he will be facing on Jan 25 2016, if anyone is interested in attending the hearings. The charge? Domestic Violence. So I guess he has NOT learned from his mistakes has he? I wonder if the court will have more sympathy for him in Parma at his Jan 25th trial.

In the meantime, keep an eye out for this sexual predator to come to a department near you. You know how they shuffle them around. Just let him go be a cop in another department after his probation runs out. Stay tuned to CopBlock.org for more on this story as it unfolds.