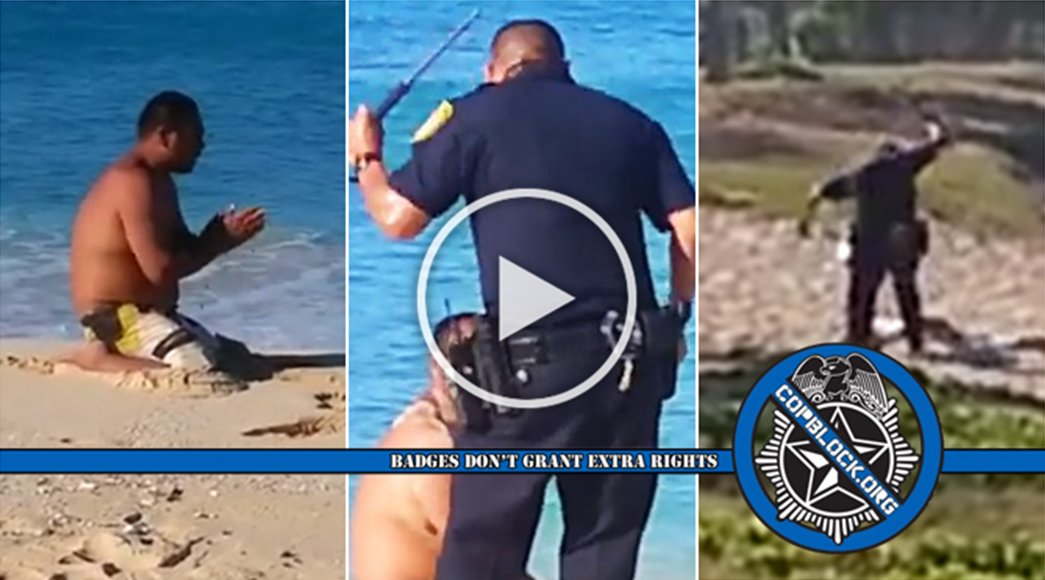 In an update to a story shared in December, a federal lawsuit has now been filed by a native Hawaiian man that was filmed being beaten by a Honolulu cop with a baton in an unprovoked incident that left him with broken bones.

Forty-one-year-old Jamie Kalani Rice was performing a ritual prayer for a monk seal he thought was injured at Nanakuli Beach on Sept. 10, 2014, when a bystander had the police called on him because of beach rules prohibiting harassment of animals.

Video filmed by the bystander shows Rice rubbing sand all over his body and chanting before officer Ming Wang can be seen responding to the scene and initiating conversation with the man.

Wang appears to be telling Rice to move away from the seal as he attempts to continue his prayer. The officer then takes out a retractable baton and snaps it in a menacing manner before he begins shaking a can of pepper-spray.

After the seal starts moving away from the men, Rice takes to his feet and starts walking down the beach in the other direction with Wang trailing close behind. The footage shows Rice shout something at the officer before he bends down, grabs his personal belongings and attempts to walk away.

Officer Wang can then be seen rushing toward him and deploying pepper spray. The spray appears to have little affect and the cop beings striking Rice wildly with his baton as he stands calmly without resisting.

Wang continues the beating until finally a blow the back of the knee sends the man to the ground. The officer is then seen continuing to strike Rice as he lie face down in the sand before delivering a kick for good measure.

A girl can then been heard on the footage weeping as the bystander who had initially called police in the first place attempts to comfort her.

The lawsuit, filed on Dec. 29 in federal court against the City and County of Honolulu, Officer Wang and Police Chief Louis Kealoha, asserts that Rice was falsely arrested and beaten without cause.

It says “he at no time posted a threat, resisted or struck Wang,” and suffered multiple injuries as a result of the violence including broken bones in his right hand.

Following the incident, Rice did plead no-contest to a misdemeanor “obstructing a government operation” charge with prosecutors dropping charges of resisting arrest.

Honolulu police launched an administrative and criminal assault investigation against Wang but declined to pursue charges against him in June. After the video emerged in December however, prosecutors launched another review of what transpired – which is still underway.

Wang was put on desk duty during the first review of the incident but has since been reassigned to a different area of the city where he is now patrolling on full duty.

Lawyers for Rice said the man was “very familiar with th[e] particular seal” being from the area, and was simply attempting to heal it. The suit is seeking punitive damages for negligence, civil rights violations, conspiracy, assault and battery, false imprisonment and emotional distress.