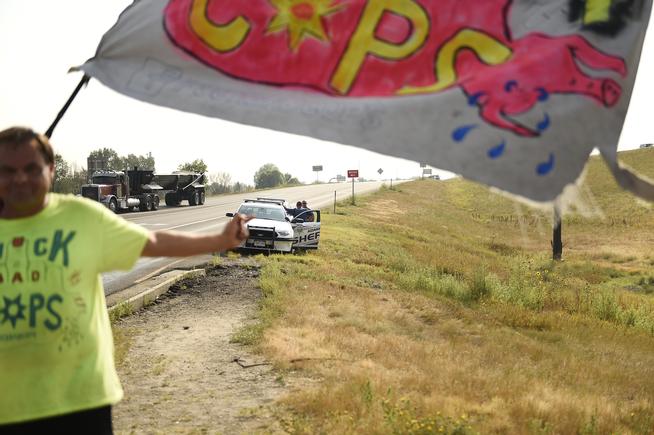 Eric Brandt is no stranger to the Westminster (Colorado) Police Department, in fact, he’s no stranger to CopBlock.org. Brandt submitted a post in 2014 where he caught police officers harassing the homeless by driving by their camps, blowing an airhorn and then driving off (see video at end of this post). For those of you who are unfamiliar with Brandt’s style of CopBlocking, he’s the man from Colorado who not only wears a “fuck cops” shirt but also rolls around with a HUGE sign that says the same.

As you might expect, because Cops are emotional softies, he’s gotten some attention from the local authorities who have repeatedly arrested him for a number of things from chalking sidewalks (I can relate) to the vulgar sign he carries with him. Now Brandt is fighting back against the police with a lawsuit. According to the Denver Post:

Eric Brandt claims his First, Fourth and Fourteenth Amendment Constitutional rights were violated when he was twice falsely arrested on two separate occasions, according to the civil suit filed in U.S. District Court.

Brandt, in the suit filed Tuesday, claims he was arrested “without probable cause to believe he had committed any offense,” in violation of the Fourth Amendment, in retaliation for his “First Amendment protected right to free speech.”

Brandt has had numerous problems with Westminster police, according to the suit.

Brandt was arrested and charged with two misdemeanors, one which prohibits “indecent” language in public parks, and for obstruction.

Later, the same day, at about 6 p.m., Brandt was stopped by officer Roger Stockman, on a public sidewalk on 72nd Avenue in Westminster, and issued a summons for “indecent language in a park” and for trespassing, according to the suit.

All charges were later dismissed, the suit said.

The suit also claims Brandt was silenced, and arrested, at a Westminster City Council meeting, in August 2014, when he tried to use a five-minute public speaking platform to address “police brutality.”

Brandt was jailed on suspicion of obstruction and resisting arrest. The charges were later dropped.

I’m honestly surprised the police haven’t tried to disappear Brandt by now or fabricate or more concrete case against him. He sure seems to get the best of them in court each time. Not a single charge has suck against him since the harassment started. Could this mean that even some of the ‘city’s’ own people aren’t willing to back the actions of the police? Or is it testimony to the power of the camera and Brandt’s relentlessness to stand up for what he believe’s right?

Either way, it seems the Westminster Police is about to shell out some taxpayer dough to Brandt here shortly. I wonder how big his “Fuck Cops” sign is going to get then?