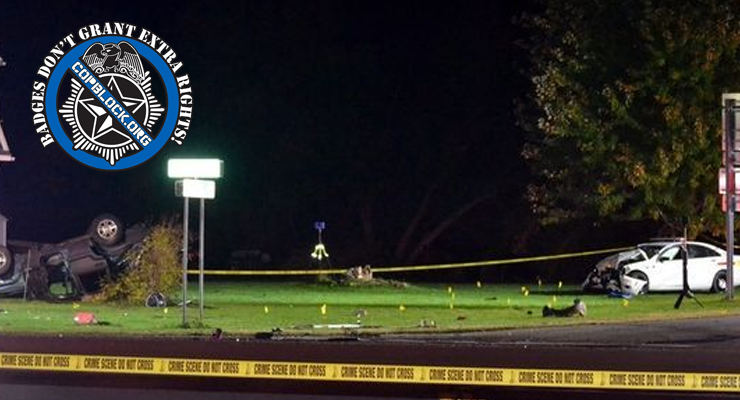 Two weeks ago James H. Bissell resigned after being involved in a fatal on duty car accident last October.

Bissell was driving through a residential area with his overhead lights on and ran a stop sign at an intersection notorious for accidents. Even now not much has been made public about the incident other than: Bissell blew the stop and broadsided Glenn T. Annalora, who had the right-of-way. The crash flipped the jeep multiple times, resulting in the 61-year-old driver being killed and his 58-year-old wife being airlifted to the hospital for internal injuries.

Residents of the neighborhood say that James was driving with his emergency lights on but don’t recall hearing a siren as he drove by their houses.

Mary Schultz said she heard the deputy’s patrol car pass her house Thursday evening as she was in the kitchen washing dinner dishes.

“I could hear his car fly by the house,” she said. “I’ve lived here nine years. You know when it’s a sheriff’s car.”

Sandy Dean, a 75 year resident of the street can’t stand to sit on her porch. She says, its nerve-racking to watch all the near misses. She compared the sound of the accident to a bomb going off. The intersection is so plagued with accidents that people have petitioned the state to do make it safer.

The man whose yard the jeep came to rest in said this is not the first time someone has died from an accident next to his house. In a previous accident a motorcycle rider lost control and crashed into his back yard.

With an intersection known for accidents, wouldn’t it make sense for officer Bissell to slow down and make sure there was no chance that he created another emergency? Speaking of emergencies, Sheriff James Voutour acknowledged that Bissell was NOT headed to an emergency at the time of the fatal crash. Opening further questions about why he had his lights on in the first place? The police still don’t know why Bissell had his overhead lights on.

The department never suspended Bissell for the accident but the chief confirmed he definitely wasn’t working. That’s about all he said. A lot of information surrounding this crash was left out .

Investigators are hoping to recover the black box. The black box data, if recoverable, will be able to verify the speed of the car and the exact time of impact. Investigators said it’s not one hundred percent every time and there can be malfunctions. Bissell had his body camera and dash camera rolling, the footage hasn’t been made public but will be used in the investigation.

Even though Bissell resigned in December, the Sheriff refused to comment saying the case was still ongoing. The district attorney only commented that the case was still being investigated. Hopefully their lack of transparency is not evidence that there will be no repercussions.

No charges have been filed over the death of Mr. Annalora. But just in case, the Police Union hired Thomas H. Burton to defend this careless cop. Burton is a former Sheriff and police officer turned lawyer. He is currently the lead attorney for the Buffalo Police Benevolent Association. Instead of separating themselves from an incompetent cop, who smashes around in his cruiser with his lights on for his own enjoyment. The department closed ranks and hired him a top attorney.

Government is the monopoly on the the use of force, this monopoly is protected from the scrutiny of civilians. Restraining police is almost impossible, they are the legitimate gang authorized to wield deadly force and punishing them for their actions is even harder, thanks to the officers bill of rights and police unions officers are even less likely to be held accountable for actions that that are negligent and have grave consequences, like this fatal accident caused by an absentminded and careless cop.

Internal investigations are a joke, no one is going to find them self at fault in there own mistake.  Making it nearly impossible to charge officers for their actions. Vehicular manslaughter can carries a sentence of three to five years in prison but it’s unlikely Bissell will ever see the inside of a cage.