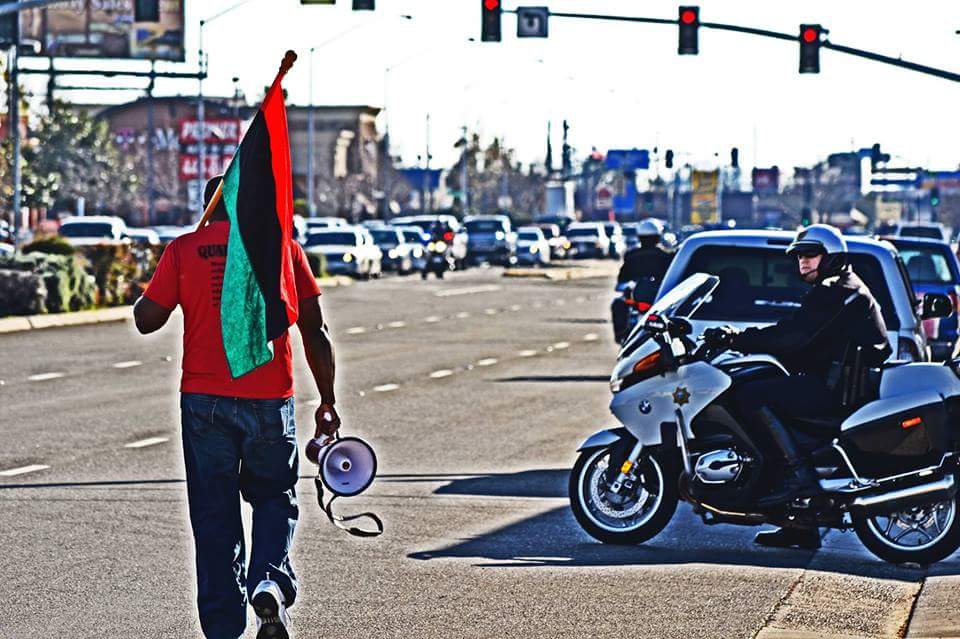 The assistant pastor, of an inner city church, who champions reform in law enforcement in Fresno is set appear in court this month.

Rev. Floyd Harris Jr. has long been a thorn in the side of the Fresno police department and the police chief Jerry Dyer. Not the typical pastor his services often start with short films about the civil rights movement, Martin Luther King and the Black Panthers. Rev. Harris has followed in their footsteps educating the next generation about their rights when dealing with police, self respect and the value of hard work.

Rev. Harris was charged with misdemeanor obstruction of traffic on Aug 10 2015 after a contingent of activists and community members shut down an intersection in front of the downtown federal courthouse in Fresno, CA. No permit was issued for the event and many participants were given tickets for blocking the intersection; Floyd was the only one charged with a misdemeanor.

Robert Navarro, the attorney defending the pastor, said Rev. Harris’s case has a range of implications and could have a chilling affect on free speech.

Navarro said Harris, 45, is being singled out for his anti-police views. While other protesters were given traffic infractions, only Harris was charged with misdemeanors.

Dyer may try to say that he is not singling Rev. Harris out for his skin color, but make no mistake, he is singling him out. Floyd has been sponsoring, and leading protests and marches against police since 2014 and his public opinions about the chief are not very flattering.

Jerry Dyer has been holding a grudge and blames Floyd for ordering people block a Wal Mart during the busy shopping season just before Christmas. This is entirely false. I was there that day. The protest marched to the Wal-Mart and did a die in the street near a parking lot entrance. Due to a miscommunication no action at Wal-Mart happened and the group marched back to Chestnut Ave.

After marching around the neighborhoods of Chestnut and Kings Canyon and blocking the intersection for hours. A small group of restless people marched back to protest at the Wal-Mart. No one ordered it. A few people who wanted to do it, did it. Blaming Rev. Harris again for the actions of others.

Navarro added that only minorities were cited at protests even though individuals of all races gathered in the street to address police violence. The police are saying that Rev Harris is the instigator at these actions,  and without his leadership these disruptions wouldn’t happen, essentially blaming the Reverend for everyone else’s participation.

Fresno police chief Jerry Dyer has been dealing protests for a few years now culminating to a head at the end of 2014, after the deaths of Mike Brown, Joseph Ma(Fresno), Ezell Ford, Eric Garner, Tamir Rice. Large marches shut down Blackstone, Kings Canyon and eventually the River Park area. His plan has always been  to target the leaders and fine the leaders threatening them with thousands of dollars in restitution if they continue to march in the streets, disrupting traffic. Interestingly enough none of the marches were declared unlawful.

Dyer sent out letters inviting key protest leaders to sit down and learn how to obtain a permit to demonstrate but none of them took him up on the offer. Probably because none of them had any intention of applying for permission to protest.

The police targeted Rev. Harris after a protest for the officer shooting death of Freddy Centeno. Fresno police officers followed Rev. Harris and a member of the brown berets home, where they confronted him with a warrant for leading the protest at the Federal courthouse on Aug 10, 2015.

In the same month Rev. Harris made inflammatory statements about Jerry Dyer and the Fresno police. He criticized the fresno police’s community oriented policing. A program where the police give out hot dogs and set up bounce houses in an attempt to make themselves appear friendly and trustworthy.

They (Fresno police) are doing this ‘community policing,’ where they give our kids hotdogs and bring them bounce houses,” he said. “And then when those kids turn 15, they shoot them in the back.”

Chief Dyer responded by accusing Rev. Harris of brainwashing the youth in Fresno to dislike police and that makes him partially responsible for negative police interactions. His ability to enforce arbitrary ruled and regulations with an army of soldiers he can make life uncomfortable for anyone who opposes him. Hopefully Robert Navarro is able to end this case with a judgement for free speech and Rev. Harris can get back to exposing the police as the violent individuals they are.