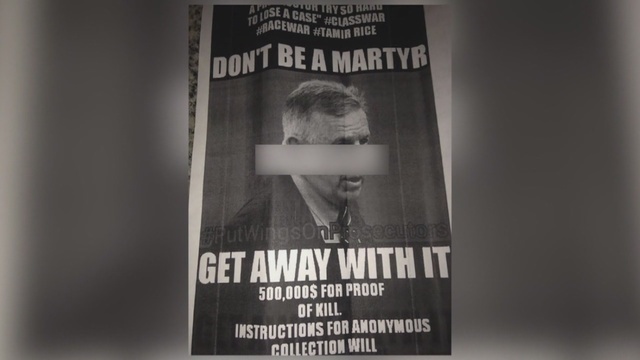 A flyer has apparently been circulated around prosecutor Timothy McGinty’s West Park neighborhood offering a 500,000 dollar reward for confirmation of his death. The poster is being classified as a credible threat and has prompted an FBI response. They are going to assist the Cleveland police in finding the person responsible for circulating the flyer.

Timothy McGinty is the prosecutor who some claim steered a Grand Jury away from indicting Timothy Loehmann for the 2014 shooting of Tamir Rice. He is not a very well liked man around Cleveland at the moment. It’s apparent that his loyalty lies with the Cleveland police and their union, as opposed to looking out for the people of Cleveland, which is his job.

The flyer mentioned Tamir Rice. It surfaced less than two weeks after McGinty announced that a grand jury would not charge the officers involved in Rice’s death . The flyer also mentioned race and class war and instructions for collecting the money anonymously.

You can not see the entire poster in the picture but it does mention #classwar and #racewar. I do not know what they mean by that and I don’t think race should be the focus of injustice here. It pisses me off to see people fighting over petty shit and making this about race. The police in Cleveland are killing people. I really do not think they care what race you are when they kill you. Just as gang violence bullets don’t discriminate, neither do police bullets! No one has claimed responsibility for the flyer thus far and I doubt they will.

“I can understand people’s frustration with him and the current justice system in Cleveland,” said one random Clevelander I asked about it. “But that can not justify levying death threats against him,” he continued

Greater Cleveland CopBlock members DO NOT condone any such acts of violence! Violence is the state’s answer. Voluntary interaction is the solution we choose. If a prosecutor can be impeached, go that route. If he can not, stop paying him. Put pressure on the city to fire him. Anyway is better than violence. There are better ways to hurt the guy than that, and my hope for humanity has faith in that people are better than that. I only hope I am right. Get rid of McGinty the right way!