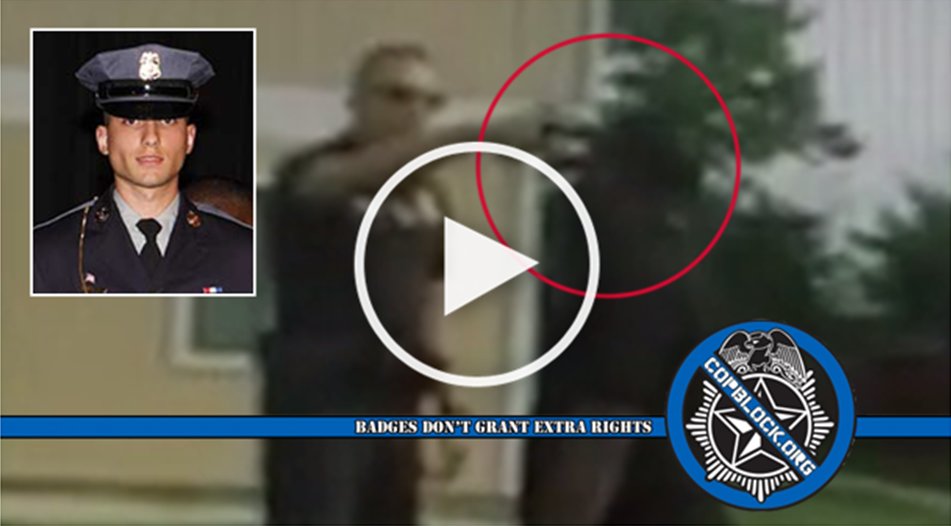 A Maryland police officer that was convicted of first-degree assault and misconduct in office after being filmed holding a gun to a man’s head, was sentenced to five years in prison on Friday.

Prince George’s County Police Officer Jenchesky Santiago was driving through the neighborhood of William Cunningham with two friends in his patrol car in May 2014 – even though he was not authorized to have people in his vehicle, prosecutors said.

Cunningham was in the process of being dropped off in front of his home by his cousin and was sitting inside the car speaking with his relative when Santiago pulled up and demanded to know what the men were doing in the area.

Prosecutors said Cunningham told the officer he lived in the house and Santiago responded by telling the men they were parked illegally, which was not true, before Cunningham asserted that he would exit the vehicle and go inside.

Santiago then reportedly backed up and parked his patrol car, exited it, and then ran at Cunningham as he was making his way to the door with his firearm drawn.

In video filmed by the cousin on his cellphone, which was released last month, Santiago can be seen walking Cunningham back toward the street with his gun drawn and stuck in his back.

“Get back over here,” Santiago says. “Get back in the car!”

“Video this,” Cunningham tells his relative. “He put a gun to my head.”

“You’re right,” Santiago retorts before pushing the man and placing his firearm directly onto his forehead. “Get back in the car now! I’m not going to tell you again.”

Cunningham then stands defiantly facing down the weapon and shrugs off the officers assault as he again pushes him toward his cousin’s vehicle.

“Go ahead, I dare you fucking fight me son,” Santiago says while keeping his gun trained on the man. “Get back in the car.”

Cunningham can then be seen spreading his legs and placing his hands on the vehicle before Santiago tells his cousin to exit the drivers seat.

Prosecutors said that according to witnesses, Santiago threatened Cunningham with a phrase that wasn’t caught on video. That line was reportedly, “We’re PG police, and we shoot people.”

Prince George’s County State’s Attorney Angela Alsobrooks remarked on the incident in December saying, “We think, unfortunately, what happened is that [Santiago] was showing off for his friends.”

Following the incident, Santiago was suspended in June 2014 and then suspended without pay after he was indicted. He was convicted last month and was facing from five to 45 years in prison.

On Friday, he was sentenced to the minimum with Alsobrooks saying, “there is no place for that type of behavior in our county or on our police force. Every citizen should be able to walk across their front yard to their door without fear of being assaulted, especially by a police officer.”

It is unclear if Cunningham plans on taking civil action in the case.

“I was shocked. At the instant he pointed the gun to my head, I was shocked,” he said. “I thought I was going to die right there. I just thought it was over. I’m thankful justice was served.”