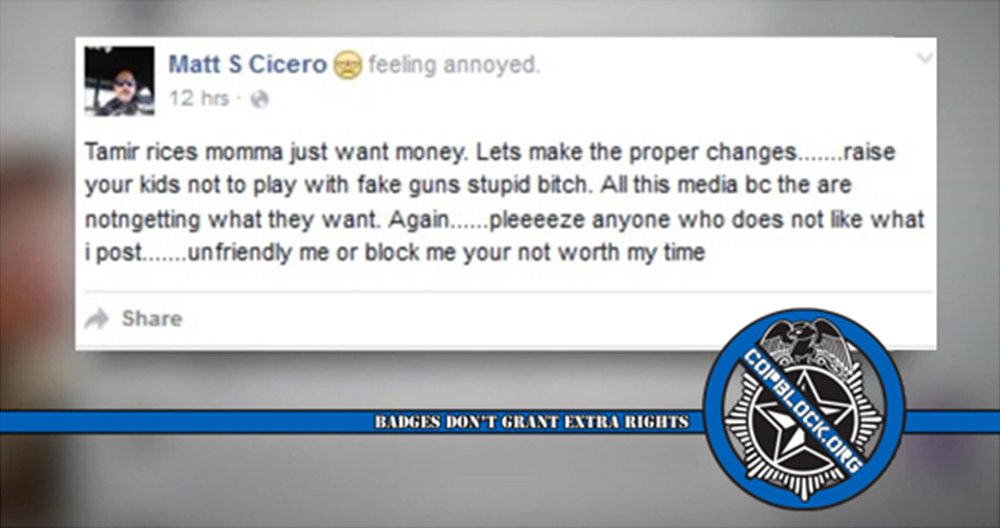 A Cleveland resource officer that works at the school 12-year-old Tamir Rice attended has been suspended after unleashing a rant on Facebook that called the deceased boy’s mother a “stupid bitch” last week.

Cleveland Metropolitan School District officer Matt Cicero made the comment after grand jurors refused to indict officer Timothy Loehmann, who shot and killed Rice within seconds of confronting him at a public park in November 2014.

Rice’s mother, Samiria, had criticized the decision calling the case “deliberately sabotaged” by prosecutors and appealed to the feds for justice. There has also been a wrongful death lawsuit filed in the case.

Cicero has since deleted his comments, as well as his entire Facebook profile, but screenshots obtained by a local ABC affiliate reveal that he said the following:

Tamir rices momma just want money. Lets make the proper changes……raise your kids not to play with fake guns stupid bitch. All this media because the are notgetting what they want…… Again pleeeeze anyone who does not like what I post…..unfriendly me or block me your not worth my time

Facebook users pushed back against the comment by asking Cicero when a 12-year-old playing with a toy gun became “a solid platform for the death penalty,” and asserted that “regardless of race, [Loehmann] was negligent and should be brought to justice for negligent homicide.”

Cicero responded by doubling down:

You pull out a gun you get shot. I don’t have time to ask questions and coddle kids that wave guns around.

In the wake of the comments, local reporters attempted to interview Cleveland Metropolitan School District chief of safety and security Lester Fultz – who walked away and refused to answer questions.

Since then however, a CMSD spokesman issued a statement maintaining that Cicero had been placed on leave while the matter is being investigated:

We are aware of and are taking seriously comments allegedly posted on social media by one of our school employees about Tamir Rice and his family.  The officer has been placed on paid administrative leave while we investigate the matter.

While we respect every employee’s right to freedom of speech, with those rights comes a responsibility to do so in ways that are appropriate and sensitive to others, particularly to the people we serve.

CEO Eric Gordon, who on December 30 cautioned all CMSD staff members to show respect for feelings on both sides of this difficult issue, said the hurtful comments in the alleged post are contrary to his expectation that staff will promote peace and understanding among those who disagree about or who struggle to make sense of this tragedy.

“The comments posted are particularly insensitive, considering that Officer Cicero works for the school district that served Tamir Rice and his family,” said CEO Eric Gordon. “Even as we grieve the tragic loss of this child to his family and to our entire school community, we are mindful of the very difficult job of our safety forces in our schools and our communities.  Neither our citizens nor those who police our communities should be painted with a broad brush, and I don’t believe we will ever find solutions to such complex issues through Facebook posts—especially posts that further divide us.”