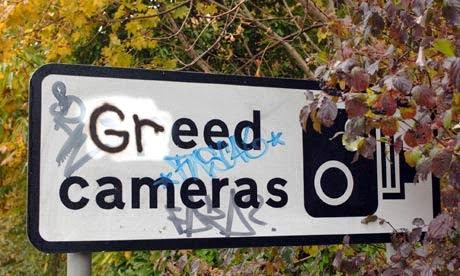 In his article, “How Waze Makes Roads Safer than the Police” Jeffrey Tucker explains how the Waze mobile app helps create a safer driving experience for everyone by alerting drivers to pot holes, accidents, and traffic jams, and also fostering a sense of community amongst motorists:

Waze has subtly changed my outlook on driving. Other drivers become your benefactors because it is they who are reporting on traffic accidents, cars on the side the road, blocked streets, and the presence of police. They are all doing you favors. If you report, others thank you for doing so. You even see icons of evidence that your friends are driving, too.

That’s right in addition to promoting voluntary exchanges between users,  the Waze app also allows users to alert others to police lying in wait to ticket motorists, a feature that police have demanded be removed “for their safety”:

Police have objected to this feature of the app. Why? Because it means that drivers are better able to avoid getting ticketed. But think about this: the app actually succeeds in causing people to obey the law better by slowing down and being safer, as a way of avoiding fines.

Why would police object? If the whole point of traffic police is to get people to drive more safely, knowing about police presence achieves that goal.

Of course, we all know the real reason. The goal of the police on roads is not to inspire better driving but rather catch people in acts of lawbreaking so that they can collect revenue that funds their department. In other words, the incentives of the police are exactly the opposite of the promised results. Instead of seeking good driving, they are seeking lawbreaking as a means of achieving a different outcome: maximum revenue collection.

Do you think this is not true? Every year police departments publicize all of their efforts to crack down on speeding, drunk, or distracted drivers and how successful they have been at ticketing people. But look at the annual budget for your town or county and you will see that the anticipated revenue from fines and fees is higher for each coming year. If their enforcement activity is so successful at stopping unsafe driving, why don’t they expect to ticket fewer people each year?

Washington, DC government officials expected to rake in big bucks from their automated traffic ticket cameras in 2014— $93.7 million. Due to camera malfunctions and drivers being more careful in response to the cameras, they took in less than $34 million. Two years later, DC’s officials are taking decisive action to ensure the traffic enforcement revenue stream of their dreams with their new Vision Zero plan. The new plan raises some speeding tickets from $300 to $1,000 (which they backed down from following public outcry) while also lowering speed limits and adding new fines. From The Newspaper:

According to the District Department of Transportation’s proposed rule, speed limits will be lowered to 15 MPH on any road near a “playground, recreational facility, pool, athletic field, or senior center.” The same limit will apply to school zones around the clock, allowing tickets to be issued at midnight to ensure the safety of school children. If there is a police car happens to be on the side of one of these roads with flashing lights activated, traffic must crawl past at just 5 MPH or face a new $500 ticket.

The article goes on to examine the city’s claim that these measures are needed for safety [emphasis mine]:

The safety justification rings hollow. An analysis of accident records conducted last year by Howard University researchers found that the District and its for-profit vendor placed cameras on safe, high-volume roads, not locations with a history of fatal accidents (view study). An extensive 2005 investigation by the Washington Post found accidents doubled where red light cameras were used (view report).

According to the city’s own statistics, only 3.1 percent of accidents were caused by drivers who ignored the posted speed limit, and 2 percent were caused by red light running. Cameras do not target the primary cause of accidents — distracted driving. Instead, the District is notorious for positioning its speed cameras in locations specifically designed to target commuters in neighboring states.

Other recent studies also get to the real motivation behind increased traffic enforcement:

The report cites studies by the St. Louis Federal Reserve Bank (view study) and George Mason University (view study) which found that, in general, traffic tickets are issued in greater numbers whenever a municipality fell into financial difficulties. The remedy of issuing tickets with license points has little, if any, effect on behavior according to researchers from the University of Maryland School of Medicine (view study).

“In short, while increased fines and penalties are often justified in light of their alleged capacity to deter illegal driving behaviors and improve public safety, there simply isn’t much evidence to back up this argument,” the report found.

If government officials were really focused on improving road safety, what might they focus on instead? Using a database of 17 million traffic accidents, economists determined “that deficient roads played a role in 52.7 percent of fatal incidents and 38 percent of injuries. The figures count accidents where cars hit large trees, collided with bridges or non-breakaway poles on the side of the road.”

Such incidents represent a far greater share of accidents than drunk driving or exceeding the posted speed limit [emphasis mine]. The study stresses that not all of the proposed remedies to deficient roads are expensive or difficult to implement.

The study authors also evaluated the efficacy of focusing on driver behavior: “Although driver factors are involved in most crashes, avoiding those crashes through driver improvement requires reaching millions of individuals and getting them to sustain best safety practices. That is not fail-safe. It is far more practical to make the environment more forgiving and protective.”

Of course improving roadways does not have the same lucrative profit incentive that comes with traffic enforcement, an incentive that encourages corruption within government agencies, the companies they contract with to set up and maintain traffic cameras, and police departments that engage in unconstitutional quota-based ticketing schemes. Multiple cases of bribery involving Redflex, a major traffic camera company, and government officials have surfaced in recent years.

The city of Chicago is suing the company for $300 million over its conspiracy with a city transportation executive, John Bills, to rig the contract awarding process in their favor and cover up performance deficiencies. Bills is scheduled to go on trial this month; Redflex’s former chief executive, Karen Finley, has already pleaded guilty to bribery charges in Chicago and Ohio.

From the Chicago Tribune:

“The lawsuit details an alleged conspiracy in which Redflex executives teamed up with Bills to orchestrate cash payments to him through a consultant acting as a bagman, as well as providing Bills with vacation trips, computers, golf outings and other perks. In exchange, according to the lawsuit, Bills coached Redflex on how to beat its competitors, orchestrated key votes at City Hall, manipulated field tests to favor the company, covered up problems with Redflex’s performance and cost taxpayers millions by encouraging city officials to buy Redflex cameras instead of leasing them.”

Bills stands accused of being the prime beneficiary of $2 million in Redflex bribes that were funneled through his lobbyist friend, Martin O’Malley, and Redflex Executive Vice President Aaron M. Rosenberg. Rosenberg, O’Malley and Karen Finley, the head of US operations for Redflex, have already admitted guilt.

According to the newly cited evidence, the bribes started in 2003, when Bills and Rosenberg began meeting to discuss the original Chicago camera contract. Rosenberg operated out of the Redflex office in Culver City, California, so when Bills mentioned that he was passing through Los Angeles, Rosenberg asked if there was anything he could do while he was out there. Bills said he wanted a hotel room, so Rosenberg bought him a room on the Redflex expense account. The hospitality effort paid off, as Rosenberg explained in a February 6, 2003 email to Finley.

“My contact [Bills] has already told me that he primed Mayor Daley that Redflex has the best system in the market — bar none,” Rosenberg wrote.

“We could not be in a better situation,” Rosenberg wrote in a May 19, 2003 email. “Trust me! We have almost removed all the unknowns; the politics and we have positioned the evaluation to ensure a positive (and significant) Redflex outcome.”

After delivering on his promise to Rosenberg, Bills allegedly told him, “It’s time to make good.” Rosenberg said they discussed how to funnel around $200,000 to Bills without getting caught. Ultimately, the payments were made through O’Malley, who received $1500 in commissions for each camera installed by Chicago. O’Malley understood that most of this bonus money was to end up being given to Bills.

In 2006, Bills flew to the Redflex office in Arizona to write a no-bid contract for Redflex to handle maintenance of the cameras. Redflex involvement in the process was concealed. The scheme worked, and the relationship between Bills and Redflex continued to blossom.

Jefferson Parish in Louisiana ended its contract with Redflex in 2010, following the discovery that the company was paying their lobbyist, a former New Orleans City Council member, 3.5 percent of the profits they received from citations issued by their cameras.  The Jefferson Parish Council voted to issue refunds to 180,000 drivers who had been ticketed through the Redflex program.

However, bribery is not the only type of corruption we see with traffic cameras. According to a 2008 article,  cities across the United States were caught intentionally shortening the duration of yellow lights, often below the minimum required by state law, in order to increase the number of tickets issued. “Short yellow light times at intersections have been shown to increase the number of traffic violations and accidents. Conversely, increasing the yellow light duration can dramatically reduce red-light violations at an intersection.”

Speed cameras are known to have problems as well. Some recent cases:

It appears that even the Insurance Institute for Highway Safety (IIHS) studies that traffic camera proponents use as proof of their efficacy are based on rigged data:

[Baltimore] Investigators said the biggest apparent impropriety they uncovered was the city’s hiring of former IIHS researcher Richard Retting to review the program “so it looks independent” despite the fact that they knew of his ties to the camera contractor. Retting was the chief author of nearly every early IIHS study that claimed red-light cameras are effective and is now cashing in by working for the industry his dubious research helped create.

Have you received a citation from a traffic camera? Be sure to look into the company operating the cameras in your area and read the article below to find out how to fight back and win.