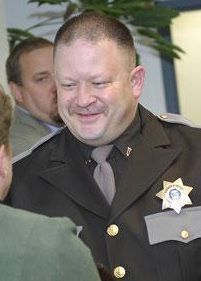 Montana’s Lewis and Clark County sheriff’s deputy Phillip Jay Clark is facing felony charges. An assault with a weapon charge came after being accused of hitting and pulling a gun on a man while drunk at a bachelor party bonfire outside his home on December 4. He is accused of pointing the gun at the man’s chest three times with his finger on the trigger.

Court documents say an agent with the Montana Division of Criminal Investigation, Anne Dormady, “spoke with a series of witnesses” who attended a bachelor party and then a nighttime bonfire hosted by Clark and others. The alleged victim, identified as C.F., is a friend of Clark’s neighbor, the documents note.

C.F. told the investigator Clark was “super intoxicated” and “excited” when he arrived at the gathering.

“He said Clark, ‘Got a little bit violent and a little bit aggressive right away.’ He said it seemed like Clark wanted to fight. He said after shaking Clark’s hand Clark, ‘pulled out his gun, pointed it at me and then laughed, handed it to somebody else like we were about to fight …'” the court documents say.

The documents say C.F. told the investigator Clark hit him in the ribs, then asked the victim to name the capital of Thailand, responded “Bangkok” and hit him in the groin before the man could respond.

“C.F. had long hair on his head, facial hair and he is half-Asian,” court documents note.

Later during the bonfire, Clark is accused of becoming aggressive toward the man again and calling him “an ISIS” while brandishing his gun. C.F. reported a friend telling him to flee.

So, there it is. It appears that to Deputy Clark, “ISIS” obviously includes a long haired half-Asian man that had clearly infiltrated the neighborhood bonfire.

“He said as he ran away he was ‘100% positive he was gonna start shooting,'” the documents say.

Deputy Clark was released on his own recognizance. I’m clearly speculating here, but I wonder if this was simply Mr. Clark and not Deputy Clark, if this man would be out and free to hunt down some more ISIS at neighborhood parties.

The case was then forwarded to the Montana Department of Justice investigation division to avoid a conflict of interest and “any sense of impropriety,” he said. Did you see the Netflix “Making a Murderer”? I just don’t have much confidence in law enforcement holding any fellow law enforcement accountable. How do we deal with this sort “we investigated ourselves and find ourselves to be clear of any wrongdoing”?

County Chief Administrative Officer Eric Bryson said Clark “is currently an employee of Lewis and Clark County.” Bryson declined to comment on whether any restrictions have been put on Clark’s job.