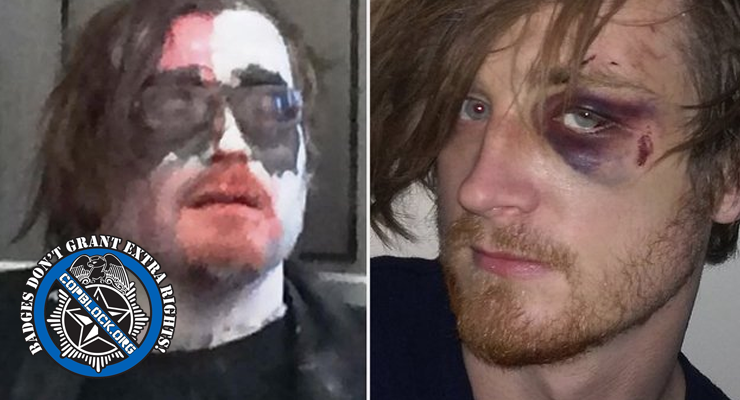 Forest Thomer has been arrested a few times for what he considers free speech related issues. The first was when he was attempting to help his friend promote her comedy show. Thomer’s friend is a handicapped woman and he was helping her promote her upcoming comedy event by saying, “come laugh at the cripple girl.” This brought the attention of the police who asked Thomer to leave, he asked why while starting to record and they arrested him. Later, he was awarded $25,000 for a wrongful arrest lawsuit.

Another time Thomer was placed in handcuffs by the police was for holding a sign that said “I’m a motherfucker.” Police arrested him for disorderly conduct and once again took him to jail. See video below.

Thomer says he plans to sue over that arrest as well but it’s still working it’s way through the system.

More recently, on January 5th, Thomer was arrested again for growling like a zombie outside the Hamilton County Courthouse in Cincinnati, OH. The reason Thomer was dressed and acting as a zombie was to show support for Jasen Dixon, who faces more than $4,000 in fines for nine zoning violations associated with a zombie nativity scene on his front yard. See the video of Thomer’s arrest below.

Thomer was held in contempt of court for his Zombie activism and ordered to spend three days in the Hamilton County Jail. Now Thomer will find himself in another civil matter with the city. He’s won the first, he seems to be on track to win his second but a contempt charge is much harder to prove civil violations over. Judges have a vast amount of power when issuing such charges.

But the lawsuits aren’t the purpose for Thomer who said:

They’re fucking assholes.  The cop that arrested me [at zombie protest] laughed at me when he saw me trying to get my money back the day after I got out of court because of my black eye. They’re bullies!!!

I can’t afford everything.  It gets expensive really fast, lol.  I’ve been paying for my lawyers, upkeep, trips, etc.

I’m just fed up with the courts and the police consistently attempting, and in some cases, making free speech a crime.

The cop from the crippled girl case a few months ago said in court ‘I need to be taught a lesson’.  It’s bullshit!  I was literally arrested for growling as a zombie while protesting the fact my friend, Jasen Dixon – who has made National News for his zombie nativity scene, is being fined $500 a day for putting a zombie Christmas decoration up.

Sadly, I couldn’t agree more. Thomer hasn’t harmed anyone but when in Hamilton County Jail he was assaulted by another inmate. Meaning that while the Zombie scene and protest failed to actually harm anyone the actions of the cops and court have. They not only caged a peaceful man but put him in a place with violent people. This while threatening a man for putting up his own display on his own property? What world are we living in where liking Zombies leads to fines, protesting a court leads to jail and speaking your mind (with words or signs) is illegal.

Does this make any sense to anyone?

Check out Forest’s YouTube Channel and check out his appearance on TheRundownLive:.