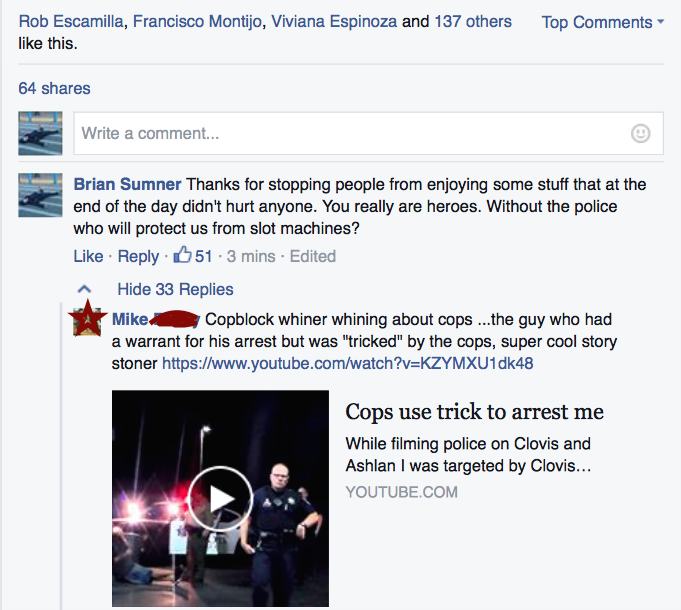 Earlier today Sergeant Curt Chastain of the Fresno Police Department’s Vice-Criminal Intelligence team posted on Facebook information about what he described as, a successful undercover operation to shut down an illegal casino operating in a local convenient store.

The casino was really just 4 video slot machines and one of them was broken. After you were done playing the owner of the store would pay you the remaining credits or winnings. The irony of the situation is that gambling is not illegal, just possession of the slot machines is illegal. Much like cars, guns and leaving the country you need government permission to own a slot machine. This is similar to the prohibition laws that made it illegal to possess alcohol but not drink it. Obviously you can’t one without doing creating a state mandated catch 22.

Full statement from the Fresno Police about their successful shutdown of a volatile criminal mastermind.

The Fresno Police Department Vice-Intel unit received a tip that illegal gambling was occurring @ the 97 Cents plus Store located @ 1121 W. Shields avenue at the intersection of West Avenue in northwest Fresno. The tip indicated slot machines were being played and any winnings were being paid out by the store.

On Tuesday 01/12/16 the Vice unit conducted an undercover operation where play was observed on a machine located inside the business and cash was paid out on points remaining. The machine was then reset by the store employee.

The investigation revealed a total of 4 electronic slot machines inside the business, with 3 of them being in play. The owner of the store was present and was arrested for being in possession / operation of the machines in her store, PC 330a (a misdemeanor)

Absent limited exceptions and those used by licensed Tribal Gaming agencies, slot machines are unlawful to possess. PC 330b. All four machines were seized as evidence.

Arrested was 38-year-old Sandeep Kaur, who was released on a citation to appear.

If you have any information on this case or others please call Fresno Police at 498-STOP where you may remain anonymous. Attached to this email are photos of the evidence.

The post was met immediately with people busting the balls of the police department for wasting their time with such unimportant matters. repeatedly the advice of “Get a life” was offered to the pathetic officers who tout their heroics on social media just so they can substantiate their parasitic existence. There was allot of genuine outrage at the police. Many questioned why the police had not addressed their drug dealing neighbor? Still more asked why they wasted so much time on an illegal slot machine when child molesters, rapists and murderers went unaddressed.

Some had outright mean and hateful things to say but who can really blame them? The police are stealing from them and using the stolen funds to raid convenient stores with video slot machines.

As with every police Facebook thread there are the unwaveringly loyal who will never speak ill of the police regardless of their actions, even they were scarce on this thread and it was refreshing to watch the social media dissent unfold right in front of me. Now if only they would all pick up a camera…

The behavior by the police is horrendous and posting their ridiculous accolades on social media is only waking people up to how useless the police are. Hopefully people will continue to call the police out on their bullshit publicly on their own forums. Technology makes redressing grievances with government all the more easy. With a couple of clicks and key strokes you can leave an opinion about your government officials for all to see. It’s actually an effective form of activism and the platform to have these conversations on the police department wall is even makes it even more powerful.

If you would like to drop the Fresno police a message about their ridiculous undercover operation and the arrest of a local business owner for operating video slots in his establishment click here.

You can also call and speak to Sergeant Curt Chastain personally and speak with him about this bogus operation. If you are on a crunch for time feel free to email him. All of the information is provided below.