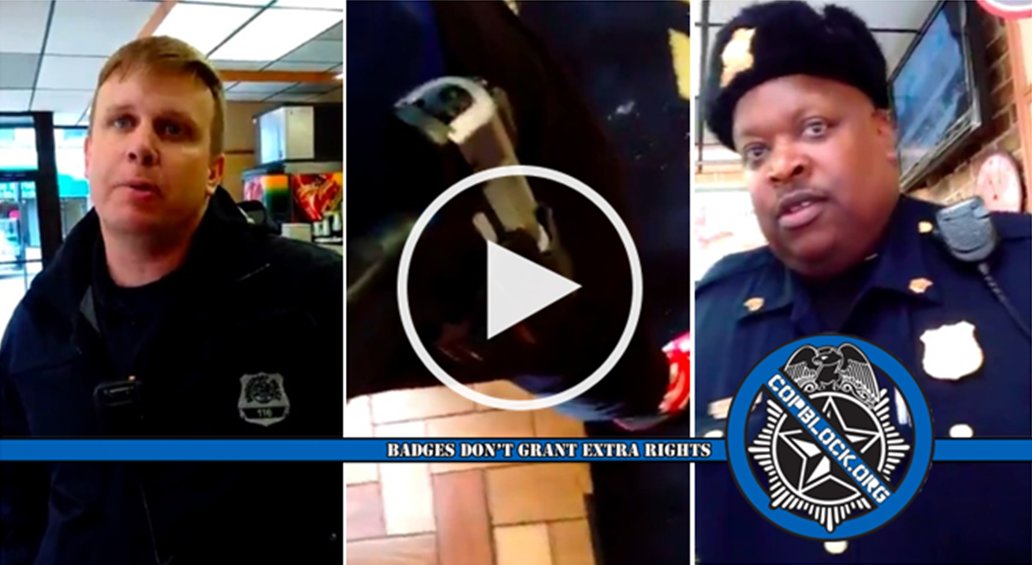 Gun ownership challenges the power monopoly of the state. So it is no surprise that state enforcers like police get uncomfortable when citizens exercise their rights to open-carry firearms.

A man in Bridgeport, Connecticut recently found this out while open-carrying in town on Tuesday. Videos he recorded show his interactions with busy-body cops, who follow him from store to store harassing him for a permit that even one of them had to admit that they had no legal right to demand.

The first video begins after the interaction has already been initiated and shows the unidentified man inside a Subway sandwich shop where he says he was just trying to get something to eat.

“Let me see your permit,” the cop responds. “I am requesting your permit.”

“Why are you requesting my permit?” the man asks again.

“Because you are armed in a public place,” the cop asserts.

“Is that illegal?” the man asks.

“It’s not,” the officer responds.

“Exactly,” the man says refusing to be cucked. “In a public place, I am the public, you are a public servant. I can walk where I want to. I’m requesting not to show you anything.”

“Do you have your permit?” the cop asks again.

“I’m not answering any questions sir,” the man says. “I’m just in Subway trying to order something to eat.”

Backup then arrives on the scene and another officer enters the establishment and begins rudely addressing the patron.

“Are you a supervisor?” the man asks.

After standing in quiet intimidation for several seconds, the obese cop retorts, “You see the stripes on my sleeve, don’t play games with me man. What’s going on mister video man?”

The man rehash’s the situation and ultimately, the supervisor allows him to “keep it moving” before telling him he has to leave Subway and find somewhere else to get something to eat.

The cops can then be heard on the footage asking servers if the manager of the restaurant is present and begins speaking with him or her about not allowing the man to eat there by invoking property rights.

The manger concedes and the man is told to leave, but not before the rotund supervisor asks him a concerning question: “Why [are] you walking around with a gun open-carrying trying to challenge the law?”

Remember, many officers see the legitimate display of gun ownership as a challenge to their monopoly authority. This is the nature of the state and their enforcers who wish to be the sole provider of “protection” to a disarmed and kowtowed populace.

The footage then shows the man exiting the restaurant with the supervisor “advising” him to “go home.”

“I’m advising you that I can walk up and down the street as I please. I’m not going home, SIR… I’m going to Dunkin Donuts,” the man responds still refusing to be cucked by the officers. “You want to talk to that manager too? You guys took an oath and you are violating my rights… Dick heads.”

A second video recorded by the man appears to take place inside a clothing store where one of the cops, thinking himself a sheepdog, continues to follow and harass the gun owner.

“You’re violating my rights right now,” the man says before accusing the officer of convincing the Subway manager not to serve him.

“I didn’t… I explained to him that we cannot order you to put your gun away, and we cannot order you to present your permit,” the cop says making a blatant admission that officers had no legal standing in the situation outside of enforcing the property rights of the manager. “As business owner, if [they’re] not comfortable with [you] being in here, [they] have that option.”

It’s interesting that the cop is quick to invoke property rights when it serves his interest, but denies to recognize the forthright legitimacy of a gun owner carrying his own property on his own body.

“I work with all the businesses down here and this is what we do,” the officer says.

“So you guys harass citizens for not breaking the law?” the man asks. “You know there’s real crimes happening in Bridgeport, Connecticut, and you’d rather follow me around. Clearly, if I wanted to break the law, I would not be having my gun open-carry when you guys are around, you know that right?”

“If you go up the street to the projects up there, I’m pretty sure there’s something up there you could do,” the man adds. “So now you’re just wasting taxpayers’ money.”

Bridgeport police did not immediately respond to this bloggers requests for comment regarding the incident. Open-carry is legal in Connecticut with a permit.

According to State police Training Bulletin No. 2013-01, the activity is only deemed reprehensible if it “creates a ‘Breach of Peace’ situation” or the if person is “intoxicated or using drugs.”

Let this man’s interaction with police be a rallying cry amongst gun owners everywhere. Refuse to be cucked and open carry firearms in face of the petty tyrants.