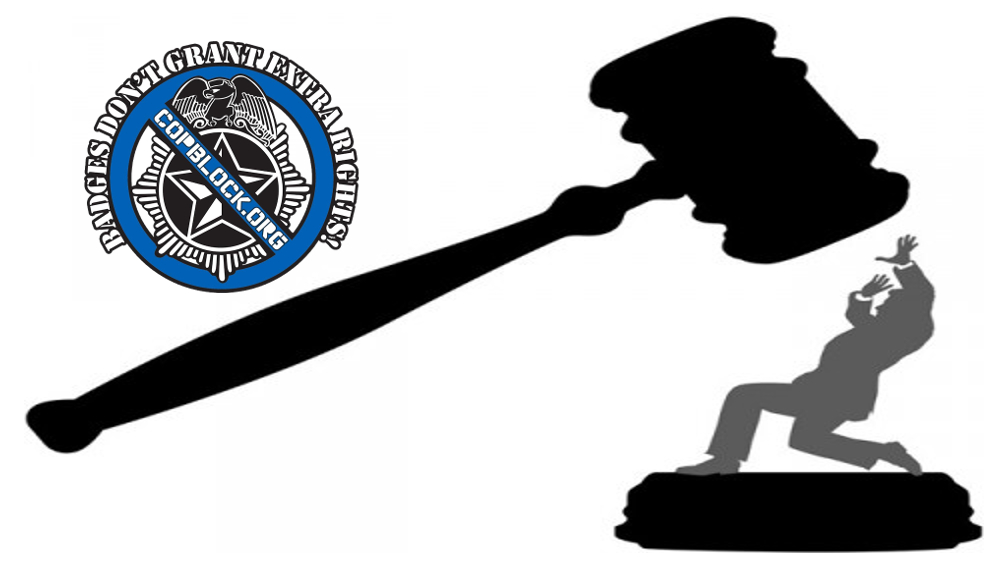 The following post was submitted by Jedediah Mountz, via the CopBlock.org submissions page.

On Dec. 1st 2014, I was at night school after a long day off work like I would do five times a week. I go to school in Norfolk, VA at Advance Technology Institute. My classes are normally from 5:45 to 10:45, Monday thru Thursday. My friend and I usually ride our bikes to class and ride home together because honestly it is safer that way.

We left class early that night around 10:20 and we had to make a stop in Portsmouth, VA to let the dog of a friend, who was out of town, out. Then we left Portsmouth around 11:10, got on Interstate 264, and traveled along Interstate 664 through the Monitor and Merrimac Tunnel. Once we got to Mercury Blvd. and Interstate 64, we parted ways because he lives near Ft. Eustis and I live In Smithfield, VA. That was at about 11:30.

I then traveled, like I normally do, all the way across the James River Bridge (JRB) into Smithfeild. I made it all the way to my road, which is Scott’s Factory Road, where I came upon a road block. As soon as I came to the road block, I stopped my bike, took my helmet off, and shut my bike off because I could see lights ahead of the roadblock. Then an Isle of Wight sheriff‘s deputy started questioning me about where I had been and where I was going.

I had nothing to hide, so I recounted my story and told him I am just going home because I was tired. I was literally less then a half a mile from my house. He said he was investigating a motorcycle running from the cops on the JRB. I said what http://www.isleofwightsheriffsoffice.com/is the description of the rider you are looking for and he said just a dark colored motorcycle. I told him as you can see I am riding a bright red 2003 Kawasaki 636. So obviously that couldn’t be me.

Next thing I know, another cop pulled up behind me. This second cop was Officer Pitts. He never saw my face before he said I was the person he was chasing. Then I was arrested and booked for felony evading and reckless driving. So, after I got bonded out of jail for this offense, I started working on my case. I ended up hiring a lawyer by the name of Shawn Cline (757-209-2328) I was confident by the way he talked about what he could do for me so I payed him his fee of 5000 dollars.

When preliminary court came I was told not to testify and that only Officer Pitts could testify. There was a court reporter there recording everything that was said. When asked questions about the case by the lawyer during cross examination, a lot of Officer Pitts answers were “I don’t know” and ” I didn’t take any notes.” So, at this point, I am like wow, how can you not know and take any notes but still want to convict me for something I didn’t do?

When the final court date happened on October 21, 2015, I had all my witnesses and all my evidence ready to show to the judge to prove my innocence. Officer Pitts testified that he was heading toward Newport News, VA on the JRB when he clocked a motorcycle traveling 136 mph going toward Smithfield on the other sided of the bridge. From where he clocked the bike, the rider had less than a mile left till the end of the bridge.

Officer Pitts testified that he was able to go to the drawbridge, which was close to a mile ahead of him, turn around, and catch up to the bike before the bike got off the bridge. How is that physically possible since the cop car he was in tops out at 145 mph? At that speed, it would have take the bike 20 seconds to reach the end of the bridge. Meanwhile, the cop car would have taken close to 50 seconds to travel that distance.

He then testified that after he caught up the bike he was able to get within five feet of the bike. He could still not identify what the rider was wearing, the license plate number, or anything other than that it was a dark colored bike. He chased the rider until he got to the intersection of Scott’s Factory Road and Turner Drive. He then lost sight of the rider and called off the chase, but stayed in the area to try and locate the rider.

Around 1138, as this rider was traveling at high rate of speed, he passed my house and the reason I know this is because my girlfriend was outside because she heard a bike coming and wanted to see if it was me. She testified in court that it was a black bike and the rider was wearing all black. After that, he ran into a police road block at the intersection of Scott’s Factory Road and Rt 258. He then turned around and yet again headed toward my house, as my girlfriend was waiting outside. If it was me, why wouldn’t I have just pulled into my driveway either time passing my house, since there were no cops in sight?

During the time the cops were chasing this guy, one of the cops lost control of their vehicle and rode into the woods. They then set up a road block, so they could get their fellow officer out of the trees. From the time Officer Pitts called off the chase until the time I came to the road block was about 40 minutes. A lot can happen in forty minutes. That night was I wearing some very noticeable clothes. I had an American flag helmet that during the court preceding no cop identified that as being what the rider was wearing. I was also wearing a black motorcycle vest with a large red duct tape “P” on the back. In addition, my license plate was personalized ” jedbke.” If you’re a cop and you’re right behind someone, you’re definitely going to notice these things.

I also want to point out that the chase started at 11:20 and I was riding with someone until 11:30, miles away from where the chase started . So how could I be somewhere else? However, when the judge returned the verdict he said why would three cops make up a story and that me and all my witnesses must be liars. After I was convicted my lawyer told me he doesn’t do appeals, which I think is really shady that he couldn’t he tell me that before. It was like all he wanted was his money.

A little about myself: I have been in the Navy for 12 years and I have three kids. I have never ran from the cops, have never been in trouble like this before, and am terrified what is going to happen at sentencing on January 20, 2016. I know I didn’t do this, but I have been out of work for so long because of this that I have no way to defend myself against something I really didn’t do. I have all the evidence to prove my innocence, but I believe I got an unfair trial. If I go jail, my family won’t be able to make the rent and then they will be homeless. Please post this and get the word out that I am innocent

Editor’s Note: According to the Virginia Courts website, Mountz was found guilty and sentenced to 3 years with 2 years and 5 months suspended for felony eluding police and also a 12-month suspended sentence for misdemeanor reckless driving. He has already begun serving the 7 months that were not suspended.  He has a GoFundMe set up to assist with an appeal.