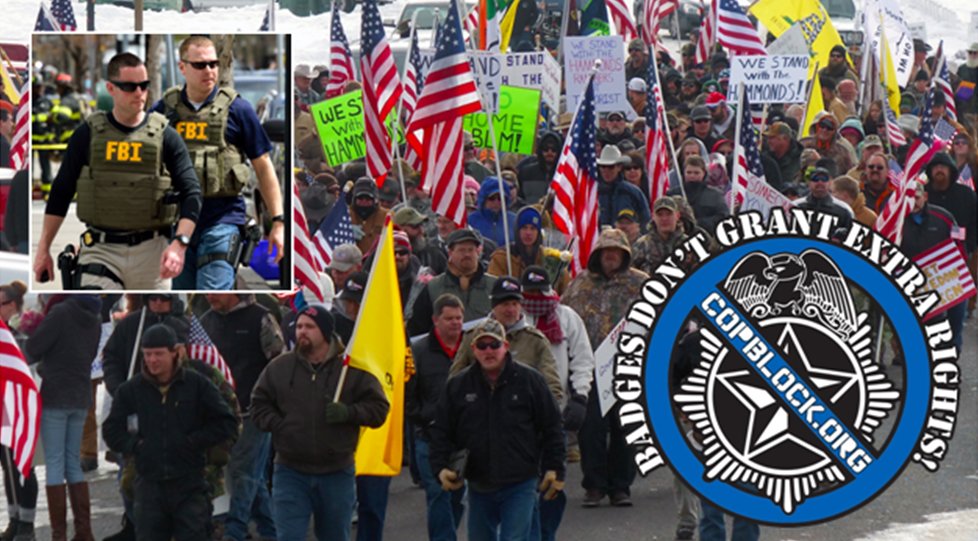 In what appears to be a coordinated effort to turn the local community against the Ammon Bundy led “Citizens for Constitutional Freedom” militia group currently occupying the Malheur National Wildlife Refuge headquarters near Burns, Oregon, a local Fire Chief claims to have caught undercover FBI agents posing as militia members in order to harass residents.

For the full back story that details the federal corruption and other issues surrounding why a group of armed men would choose to take a stand against their government, you can click HERE – but its important to understand that the FBI has a rich history of abuses.

Among these include the Bureau running various sting operations across the country that target vulnerable and even mentally ill people by luring them into participating in fake terror plots concocted by agents themselves in order to make “busts” and pat themselves on the back.

In other words, the possibility of the FBI running a psychological operation aimed at fomenting local sentiment against the militia members in Oregon is certainly plausible and is not without historical precedent. The Bureau has infiltrated militia groups many times before, but perhaps some of the most notable similar tactics that have been documented include a series of covert, and at times illegal projects conducted to “expose, disrupt, misdirect, discredit, neutralize or otherwise eliminate” the activities of domestic political organizations.

Called COINTELPRO, the counter intelligence measures targeted movements and leading Americans who criticized the Vietnam War including Senators, civil rights leaders like Martin Luther King, journalists, athletes, and others between 1956 and 1971. Its hard to imagine these operations ever stopped or didn’t continue under a different name but one thing appears to be clear: the FBI is up to its old tricks again.

According to a press release issued on Wednesday entitled “FBI Agents in Oregon posing as Militia,” Nevada Assemblywoman Michele Fiore states the following:

I just got off the phone with the former Fire Chief of Burns, Chris Briels, the Burns Fire Chief from 1984 to 2006. When he retired in 2006 the county asked him to stay on as the county Fire Marshall. According to the conversation I had with Chief Briels today at 12:26 p.m. Pacific time, he disclosed to me that the Sheriff’s office and Judge Grasty has been telling the community that the “militia” have been following and harassing people. Chief Briels observed what he thought was “militia” poking around the Armory and following townspeople so he took it upon himself to pull them over. According to Chief Briels these men posing as “militia” were the FBI. Chief Briels was so upset he has just resigned as the county Fire Marshall. He has gone public with this information.

Fiore belongs to an organization called the “The Coalition of Western States,” which according to the release, “represents over 50 legislators and grass roots leaders predominantly in the Western United States dedicated to stopping federal overreach.”

The claim comes on the heels of concerns by militia members and activists on the scene in Oregon like radio talk show host Pete Santilli, who have expressed concerns about “the FBI covert[ly] deploying many resources upon the community such as human operatives, electronic surveillance and harassment, media propaganda and psychological warfare.”

Harney County Sheriff Dave Ward has said that officers and U.S. Fish and Wildlife employees have reported being followed to their homes and observed while inside by self-identified “militia members” who have tried to engage them in debates about their status as federal employees and intimidate them. Were these people really militia members?

At a small press conference held on Wednesday, Briels told his story. The now-former Fire Chief corroborated Fiore’s account and maintained that he indeed caught undercover FBI agents attempting to stir up trouble by harassing locals.

“I want to figure out what it is that we can do as citizens of the United States of America to retain our rights,” Briels continued. “I guess that must be a bad thing… I’ve been the County fire chief here since 1984. I have worked with the Hammonds, I have worked with ranchers all over this community to help with fire prevention, to help with controlled burns, to do what I can to help my fellow man.”

“I will stand before you and tell you the truth,” Briels asserted. “I stand before you as someone that has tried to be intimidated in many, many ways. The other day a friend of mine poked me in the chest and said, ‘you need to find out what your cohorts are doing at the Armory because there are people that have been at the Armory twice. They’ve been turned into the police.'”

“I thought my gosh, so I followed the people… until they stopped and I got out and asked them who they were [and] they were dishonest with me,” Briels said before detailing how the men repeatedly lied to him about what they were doing. “I asked them to please be truthful with me because I was trying to be truthful with them and that there’s too much fear in our community. Push comes to shove lets just kind of get down to the end of it.”

“I pursued information, I took a picture of their vehicle,” Briels maintained. “I was not allowed to see [the] Harney County Sheriff. I went up to ask to speak with him but I was told no I couldn’t… so I called the dispatch. They ran the license plate. It came back to undercover FBI agents… This is absolutely appalling to me.”

The mainstream media has yet to pick up on the alleged provocations and seem to have only decided to run headlines about the press conference that say things like, “Harney County fire chief resigns, sides with armed protesters,” and “Harney County won’t host community meeting with Bundy.”

In other words, it is once again up to the alternative media to bring you this story – and it is important it gets out. Especially considering the history of how the FBI and other federal agencies have addressed similar situations in the past in places like Waco, Texas and Ruby Ridge, Idaho.

After two weeks of occupation, the FBI now leads the coordinated law enforcement response in Burns and is working with the Harney County Sheriff’s Office, the Oregon State Police, and other local and state agencies.

“Due to safety considerations for both those inside the refuge, as well as the law enforcement officers involved, we will not be releasing any specifics with regards to the law enforcement response,” the Bureau has said. They maintain they are looking for “a peaceful resolution to the situation” but have not commented on Briels’ allegations.

At a press conference earlier this week, a spokesman for the militia group said they plan on meeting with the local community on Friday to outline in greater detail why they are there and discuss a time table for their departure. An imminent withdraw from the area was not alluded to however, and seems unlikely.

For real-time updates from the scene, follow the Bundy Ranch and the Citizens for Constitutional Freedom Support Group Facebook pages. The latter has said the FBI agent provocateur revelations amount to nothing less than “a coordinated psy-op (psychological operation) to turn the sentiment of the [local] residents against Ammon Bundy and the Citizens for Constitutional Freedom.”

Update: In statements made to the U.S. News and World Report, Briels has attempted to clarify his statements about what he observed at the Armory.

“[The undercover FBI agents] weren’t posing as anything other than dishonest people,” he said. “They were perceived as militia by the locals, but they weren’t posing out there with a shirt that said ‘I’m militia.’”

In other words, Briels maintains that he didn’t witness an overt attempt made by the spooks to out rightly identify themselves as militia members, but this doesn’t silence concerns about infiltration and the possibility of a psychological operation geared toward residents.

After all, the FBI has still not denied the allegations and one would think that the Bureau would know exactly how they might be perceived if covert agents began wafting around the area stirring up trouble dressed like militia members.

The reality that they didn’t say “I’m militia” means little, but what ever the case, one thing is clear: activists and protestors in Oregon need to stay vigilant.