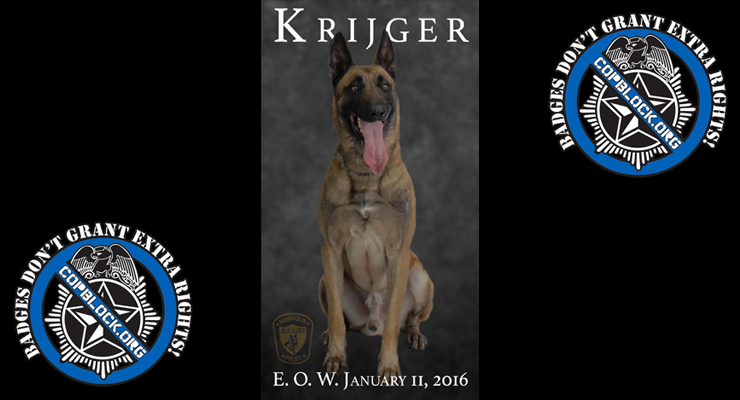 Both versions start out the same: 58-year-old Keith Richardson’s wife ran from their house in Norfolk, Virginia to a neighbor’s and called 911 after he put a gun to her head the evening of January 10. When officers with the Norfolk Police Department arrived, it marked the beginning of a seven-hour standoff with Richardson.

According to the Pilot Online, “Negotiators tried to get Richardson to give up his gun and surrender as police got warrants charging him with abduction, robbery, brandishing a firearm and using a firearm to commit a felony.

Another one of Richardson’s neighbors, Gene Strickland’s account of what happened was reported in the same article: “He said that during the night, he watched police fire tear gas into Richardson’s house, use a battering ram to knock in his front door and send robots into the house, which Strickland initially thought meant his neighbor had committed suicide.”

Both police and Strickland report that Richardson eventually came out of the house and went to his car. The stories diverge when it comes to what happened next.

According to the official police version: “Officers unleashed a police dog, a 4-year-old Belgian Malinois named Krijger, and Richardson shot the dog to death, she said [police spokeswoman Melinda Wray]. Then Richardson raised the gun at officers, which is when a SWAT officer shot him. When they realized he was still mobile, police sent in a second police dog, which kept him at bay long enough for officers to take him into custody, Wray said.”

Strickland said that Richardson left his house around 2 a.m. He said he thinks his neighbor was trying to secure his two dogs that had escaped out the broken front door. On Monday afternoon, plywood covered the front door and two front windows, shattered glass was strewn across the front porch, and what looked to be cannister-size holes had broken through at least a half dozen other windows around the house.

That’s when police shot Richardson once in the left leg and two police dogs attacked him, Strickland said.

“There was a dog that was just eating him up,” he said.

Richardson then shot one of the dogs, Strickland said.

Richardson was taken to the hospital in critical condition with two gunshot wounds, according to his daughter, Michelle Young. “One bullet shattered his hip, and the second entered his belly, went upward and damaged his intestines and heart.” Richardson died on January 12th when Young authorized hospital staff to remove life support.

He leaves behind a number of unanswered questions. Who fired first, the police or Richardson? Did Richardson ever actually point a gun at the police officers on the scene?When did the first dog attack him?  If they sent the dog out before shooting Richardson and at least partially incapacitating him, is that in line with policy? It seems sending a K-9 after an armed suspect would be knowingly  sending that dog off to die.

Richardson certainly cannot tell his side of the story, in a court of law or otherwise. Strickland recorded the end of the standoff and provided the video to both the FBI and the Virginian-Pilot.

Young was able to visit her father in the hospital the day before he died, “where he was awake and aware of what was going on.”

“He tried to talk to her but had a tube down his throat, Young said. He looked as if he wanted to write something but was restrained. Police said they couldn’t give him a pen and paper.

She doesn’t know what her dad wanted to tell her.”

The police couldn’t give him something to write with, or they wouldn’t? In either case, now that Richardson won’t stand trial, it’s highly unlikely any effort will be made to investigate the discrepancies between the official report and the neighbor’s account. Instead the narrative has moved on to honoring the “hero police dog,” whose sacrifice inspired Anderson Cooper to donate enough money to the Norfolk Police Department to buy bulletproof and stab-resistant vests for its 18 K-9s.

Mourning the loss of this dog allows the country to sidestep important questions about how K-9 units are used and whether that constitutes abuse for both humans and animals alike.

But these dogs are dynamic systems. Their capacity for decision and error is both their biggest flaw and greatest strength. The dog, a learning machine, makes its own exceptions to situations based on an array of variables, including tells from their handler. Since these decisions ultimately lead to reception of a reward, then they are no longer innocent agents but cybernetic mercenaries, with decision making that is open to influence…

… But advanced technology does little to improve the precision of weaponized K-9s. Despite a lifetime of training, dogs are inherently imperfect machines, and high-stakes errors do occur in the field. In the event of a broken leash or a misinterpreted signal, there is little that can be done to stop an attack once it starts. The dogs are unaware of the line between excessive and necessary force, lacking the situational awareness to decipher the grey area that is our American judicial system. As a result, the dogs, when they are “on” and ready to work, tend to latch onto anything that runs. They are unlikely to distinguish between good guys, bad guys, and the fleeing innocent. An accidental death or debilitating injury can therefore be blamed on enthusiasm, a hard-working dog simply doing what it was trained to do.

Given their inherently imperfect judgment and the dire consequences of their mistakes, why do dogs remain in the forefront of law enforcement?

Another recent article from Photography is Not a Crime (PINAC) describes a 2012 case of a K-9 viciously attacking a suicidal teenaged boy whose face was left permanently disfigured. The officers planned the attack before they even arrived at the scene, a detail revealed by the texts (such as “Come get UR bite”) they sent each other.

Lemay’s vicious attack in 2012 was only 1 of 34 attacks by the small Florida town’s police dogs over the course of five years which was only brought to light recently in an investigative report by the Sarasota Herald-Tribune.

North Port has just short of 60,000 residents, which means one out of every 1,800 residents has felt the hot breath of their “trained to maim” police K-9s breaking open flesh in stark contrast to the rare nature of these incidents before 2010.

Martin Lee Hoogveldt received a $125,000 settlement for this 2013 attack by a K-9 with the West
Jordan Police Department. Of course the department said its officers acted appropriately.

However people suspected of crimes have not been the only ones to be horrifically mauled by police dogs. A 17-month-old infant was attacked by a K-9 in Nevada a year ago after cops released it into the car of innocent man. As per usual, no one was disciplined, no policy changes were enacted, and tax payers were left on the hook for another settlement.

Last February, the 4-year-old son of a police officer in Rialto, California was brutally attacked by the officer’s K-9 partner, a 7-year-old Belgian Malinois named Jango who had lived with the family for two years. The boy had wandered outside into their backyard where the dog was loose.

Two teenagers playing football nearby heard the screams of a neighbor who spotted the attack, De Anda said.

One of the teens alerted his father, Jeff Houlemard, who knocked down the home’s wooden gate and kicked the dog in an effort to free the boy’s leg.

Houlemard put his hands on the dog’s jaws to pry him from the boy’s ankle while two teens pulled the boy to safety.

“Houlemard then picked the K-9 up, slams him to the ground, sits down and bear hugs him,” De Anda said. “Had he not intervened, we’d probably be talking about a tragic death.”

The child’s injuries from the mauling were so severe his leg had to be amputated. Any non-police dog that attacked a child in such a manner would face a swift and certain end via euthanasia, however, Jango was merely allowed to retire.

These disturbing cases are not really surprising considering where many of America’s K-9 unit dogs come from:

For the duration of the Cold War, the notoriously ruthless Czech Border patrol, known as the Pohranicni Straze, created a state-sponsored K-9 breeding program. The K-9s produced were exceptionally aggressive, intended to stop any Soviet defectors to Western Europe. Current-day breed aficionados boast that the P.S. dogs caught and killed 20-30 escapees per day on the borders between East Germany and Austria. The New York Times reported that dogs on sliding leashes were stationed along the un-walled sections throughout the 1960s and 1970s.

If you’re going to operate a police state, you’ve got to have the tools of the trade, right?